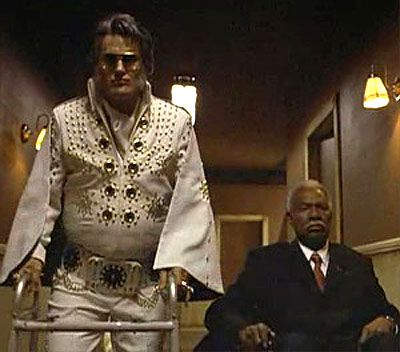 Based upon the short story by Joe Lansdale

With
– Bruce Campbell as Elvis
– Ossie Davis as JFK
– A Mummy

Oftentimes, movies and the people who make them, require you, the viewer, to “suspend your disbelief.” Usually what this really means is, “look, we know this film is absolutely ludicrous, but if you will just pretend that your intelligence hasn’t been insulted, if you will make believe that the performances you just watched don’t smell like dog shit, if you will forget for one minute that the assholes who stared in and directed this train wreck are gazillionaires several times over and are actually totally without merit as human beings, you will totally dig what you are watching.” Even though I haven’t seen The Matrix Part III yet, I know the above is applicable.

With Bubba Ho-Tep, a movie in which a geriatric Elvis Presley and an equally ancient JFK–who is black, by the way–do battle with a 5,000 year old mummy in an East Texas nursing home, the opposite is true. You need to start believing. Credit where credit is due. The coup of getting Bruce Campbell to star as an aged, beaten down Elvis Aaron Presley, well, it is an actual coup. Several other actors no doubt would to have loved the opportunity to pump up their “indie cred”; Nic Cage, Jim Morrison Kilmer, Jim Carrey, etc. Campbell is and was the perfect choice and probably the only actor who could have pulled it off. Wait, he did pull it off. I read some dumb-ass (non-Ruthless) review where the person wrote that Campbell “lovingly portrays Presley.” Hogwash I say! Bruce ripped old Elvis down to the bone, and then rebuilt him as a far superior caricature. Campbell humanizes The King to a level where members of the Memphis Mafia wouldn’t recognize him. If you have ever wondered why fan boys are so gaga in love/constantly flexing their boners over Bruce Campbell, you no longer have to rent Evil Dead II. Bubba Ho-Tep will tell that tale just fine.

I’m not going to spend too much time on the plot. Actually, I already covered it in the preceding paragraph. JFK as a black man? Well, as JFK says in the movie, “They dyed me this color.” The funniest parts of course occur when Elvis is talking soul-sucking and Mummy-killing with Jack Kennedy. OK, fine, the funniest part was when they found some graffiti the mummy had written on the bathroom wall in hieroglyphics which reads, “Cleopatra Does The Nasty.” But when they first hear the mummy “scuttling” down the hall, JFK thinks it is Lyndon Johnson coming to kill him. Elvis says, “Lyndon Johnson is dead.” To which Kennedy answers, “Dead? That won’t stop Johnson.”

Sure, the movie runs out of gas at the end, but who cares? At that point the novelty is thin and the joke is old. Still, you are smiling. The fact that writer/director Don Coscarelli (who is responsible for such big small screen gems as The Beast Master , Phantasm, Phantasm II, Phantasm III, Phantasm IV as well as the upcoming Final Phantasm) could keep me interested in such a cockamamie story for seventy minutes is triumph enough; I’ll forgive him the final fifteen. I like Bubba Ho-Tep because it stays true to itself. It offers nothing in the way of excuses or historical oddities. No one tries to disprove the fact that Elvis and JFK (and the Lone Ranger) are all living in the same nursing-home. Bubba Ho-Tep just lays it all out. Elvis is still alive, as is JFK–who is now black–and they have to defend their nursing home from a 5,000 year old mummy. Simple as that. Bubba Ho-Tep is everything The League of Extraordinary Gentlemen should have been. Fun, interesting, fantastic in scope and light hearted in the details. And while there is probably nothing funnier than watching Elvis “hump it” down the hall with a walker whilst in hot pursuit, watching that same Elvis feeling blue for mistreating Priscilla and question the meaning of it all, well, you just really need to watch for yourself. I promise you’ll smile.