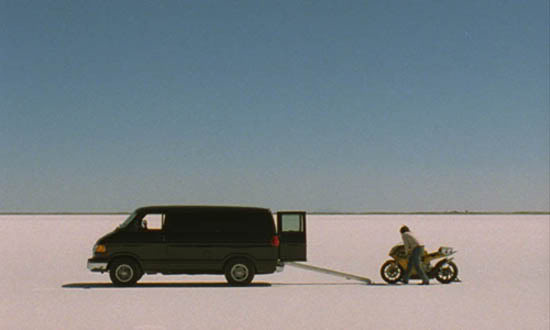 A man rides around a track on a motorcycle. He does not crash, nor does he speed towards a nail-biting finish. He merely rides. That same man drives in a van. Drives a whole fucking lot. And we are right there with him, although most of the time we stare out his windshield, usually accompanied by wistful dirges and splattered bugs. He then visits an older couple, talks about a bunny for a few minutes, remembers his childhood, and is once again on his way. The driving resumes. Yes, it’s still a whole lotta driving. He asks a young girl at a gas station to come with him, and she agrees for no other reason than, well, he’s kinda cool and she’s a little nutty herself. He takes her home to retrieve some clothes, and then leaves without her. More driving. A few shattered looks. Maybe a tear. Then he stops for lunch. We watch. Then he stops for gas. We watch. Then he meets a battered looking Cheryl Tiegs at a rest stop. Without exchanging a word of dialogue, he begins touching her face. Soon they are making out. Just as quickly, he leaves again. Okay, more driving, more sad songs, and then he hits Las Vegas. He sees a bunch of whores, picks one up, treats her to a Big Mac, and drops her off again. More eating, more crying, more driving, and then he reaches Los Angeles. He stops by a house and pounds the door asking for Daisy (Chloe Sevigny). No answer. Oh shit, I forgot about the motorcycle ride on the Bonneville Salt Flats in Utah. Okay, back to LA. He checks into a hotel room, Daisy arrives, he gets one helluva blow job (which we get to see in its entirety), then she disappears as we realize that long ago, Daisy died by choking on her own vomit after a night of drug use, which also killed the baby that was inside of her, and that the oral was merely a fantasy. Picking up the pieces, he leaves the hotel, gets in his van, and drives again.

Rarely am I able to recap a film in its entirety in a mere paragraph, but there’s never been a film quite like The Brown Bunny. Vincent Gallo — actor, director, producer, editor — is Bud, the man who drives most of the time, that is when he isn’t overwhelmed by depression. We have no idea who he is at any stage of the film, but that’s the way I prefer it. What tiny shreds we do get bore me to tears, and I imagine Gallo’s on-screen character is just as self-indulgent and narcissistic as his real-life persona. I’ve heard it said that this is “minimalism,” but it would be more accurate to describe it as nihilism, for Gallo has nothing but contempt for narrative, structure, process, and even cinema itself. I can enjoy abstract, frustrating works (Gerry) but when they don’t work, they are among the first films to drive me screaming from the theater. Gerry had dramatic plight in store for its characters, and presented the absurd scenario that yes, people can get lost in this age of cellphones, e-mail, and instant communication. The Brown Bunny, on the other hand, is about nothing at all. Fine, the revelation at the end that Daisy is dead is a “twist” of sorts, but so little has been done to elicit our concern that in the end, she’s little more then yet another dipshit who died a worthless whore. It’s always a shame to lose a chick who can inhale cock like that and still carry on a conversation, but that’s the way it goes.

The Brown Bunny is impossible to imagine without its driving force, one Vincent Gallo. After the film, Gallo sat (or I should say squirmed) through a two-hour Q&A session, although I did learn that the record (three hours in Minneapolis) was not broken. Gallo is everything you would expect — bizarre, creepy, charming, and most likely mentally deranged. His anecdotes were fun for about 15 minutes before it hit — like a thud, mind you — that the man I was listening to just might charge the audience with a sharp object. He talked about his lust for a five-year-old Christina Ricci, his Cannes experience, his love of music, and his firm belief that he is not a filmmaker. On that we can agree. The Brown Bunny is decidedly not cinematic, and might have worked as a short story, but Gallo is one of those people who simply must try everything. And why, for fuck’s sake, would he make a film if he is not a filmmaker? By that standard, isn’t every single human being obligated to pick up a camera? This isn’t a humble artist trying to deflect attention; this is a raging egoist who doesn’t bother to learn a craft and still believes he should share his shortcomings with the world. He admits that the audience for his film is small indeed, but he moves forward — accepting funding and hitting the circuit — because he honestly believes he has a vision for the world. Many people have strange impulses and twisted desires, but only a self-described “artist” has the bloated self-importance to put others through his indulgences.

How I sat through two soul-killing hours of hysterical Q&A is beyond me, and, much to my disappointment, the audience stayed very calm. I had hoped to start a riot, but I was so weak and stripped of joy by the end that it was all I could do to keep my head up. Gallo is a man who has no trouble telling you each and every detail of his life — even the particulars of a real-life hotel affair with Sevigny herself — even if you hadn’t asked. And why not? The Brown Bunny is nothing more than a home movie writ large, as Gallo (like dippy tourists) never met a long take he didn’t like and is so in love with what he’s doing that he can’t bear to leave anything out. He had fun driving across America, so you’d better share the joy. And if Gallo wasn’t bad enough, there was the moderator — a film critic for Film Freak Central — who insisted that this shit sandwich was brilliant art. This critic is yet another film school inspired type who believes there are only two schools of cinema — mainstream mall garbage and incoherent, yet “masterful” brilliance like The Brown Bunny. There’s simply no middle ground. If a film has a story, it’s selling out. If a film presents characters with depth and substance, it’s too commercial. If a film has a budget above five figures, it’s a slave to the system. As much as money corrupts art, it is just as true that a lack of money doesn’t necessarily inspire selfless truth. Everything we see in Gallo’s vision of the world is just as phony, subjective, and compromised as anything put out by Jerry Bruckheimer. Only without the on-set catering.

Oh well. I didn’t like The Brown Bunny, but I can also admit that the Cannes audience might have overreacted a bit. It’s not Dune after all. Still, I have little patience with those who push their self-described brilliance like crack, and it wouldn’t bother me a bit if Gallo never worked again. He might be speaking to loneliness, the male ego, or sexual frustration, but the packaging forced me to detach from the message. A filmmaker can be an iconoclast and still present challenging, thoughtful works, but such “rebellion” from the mainstream need not foster hostility for the very people he claims to speak for. If it does, it means that Gallo is yet another “artist” whistling in the dark, laboring for himself alone, then damning the absence of fanfare.