Written and Directed by Todd Phillips

– Will Ferrell as A Straight Man

– Luke Wilson as Not as Funny as Owen

Erich breaks it all down…

I want to review Old School
because I like it and I think the typical Ruthless Reader would
probably like it, too. Because it’s funny. But I’ve always had trouble
reviewing this kind of movie. All I can really do is A) tell you that I
found it funny, which I already did; and B) ruin it by listing all of
the jokes, which is pointless. I guess I can cover the film’s premises
as well. A bunch of thirty year olds start a frat, even though they
aren’t in school, enjoy the last of their youth and have conflict with
a crusty dean. OK, what now?

I decided to check on the pro reviewers and see how they
handle this one. Ebert just talks about some of his college experiences
and college in general and says he doesn’t find the movie funny. Once
when I was in college I threw up on my driveway and a bunch of change
fell out of my pocket and everybody thought I was throwing up spare
change, which deeply impressed them for some reason so I just kind of
played along. Then Jonny
put a hole in my wall with his fucking ass. I’ve never understood how
that happened. When the President of the United States visited our
school, we had this nerdy guy build and set off a bra bomb. The dean
was sure mad, but the Prez offered to make me his “Secretary of
Partying Down” Needless to say, we were in college during the Clinton
administration. 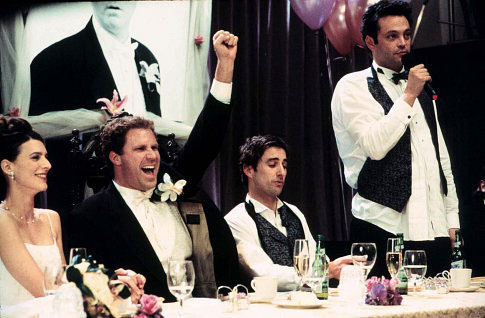 Mike LaSalle of the SF Chronicle says “The saving grace of Old School”
is that it has about a dozen funny moments. These moments aren’t mildly
funny or chuckle funny but really funny?” Saving grace? It’s a fucking
comedy! Funny = Good. LaSalle’s assessment is like saying that Warren
Buffet’s saving grace as an investor is that he’s made billions and
billions of dollars. The rest of the review is an elaboration.
Shockingly, Old School lacks compelling characters or an
engrossing story. Thank goodness it’s an excellent comedy, because
otherwise it would be a poor one.

Salon.com’s
Andrew O’Hare points out that you probably know if you’ll like the
movie before you see it. Then he says, “I am here, however, not to
condemn Old School but rather to play a role not unlike that of
the stuffy, tweedy professor in a college comedy who shows up, in the
final dance-party scene, to shake his rump.” I thought that was a funny
analogy. Wait, make that a simile. See, I did go to college. Anyway,
O’Hare goes on to tell us that the movie is funny a couple more times
and to say that the actors are funny. 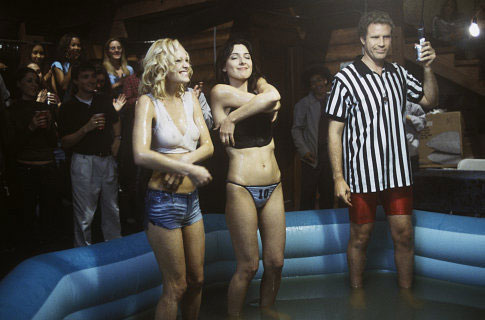 So, if the professionals can’t do it either, I don’t feel so bad. Old School
is funny. I liked it because it was funny. It had funny jokes. The
actors are funny. This is one funny movie. Not one of the funniest
ever, but one of the funniest of the year. They should have cut out the
sappy scene about Vince Vaughn being true to his wife, though.