I’ll tell you this much, I enjoyed The Bourne Supremacy a hell of a lot more than I thought I would. I liked it much better than the original, The Bourne Identity, too. Thinking back on the first installment (and rereading what I wrote) I realize that I just found the CIA too childish; too flipant to be believable as some sort of “bad” agency. Again, Stiles was totally out of water, and well, they just seemed like a bunch of kids who are into the spy game for shits, giggles and the chance to see Europe. Not so in Supremacy, a much more mature and sophisticated action thriller. To be sure, there is a ton of action, but director Paul Greenglass took the herky-jerky style developed by Doug Limon from the first film and ran with it. So much so that, well, I can’t call it a break through, but it was a very novel way to see an action film. Look, we know that Bourne kicks everyone’s ass before we walk in the theater, right? So, I think the violently shaky camera work made the standard “I’m an unstoppable killing machine” thing much more interesting. Not all I agree. Erich’s girlfriend spent most of the movie with her hand over her eyes because all the rapid movement was making her ill. But she’s a dumb Jew, so what does she know? Damn it, so am I… 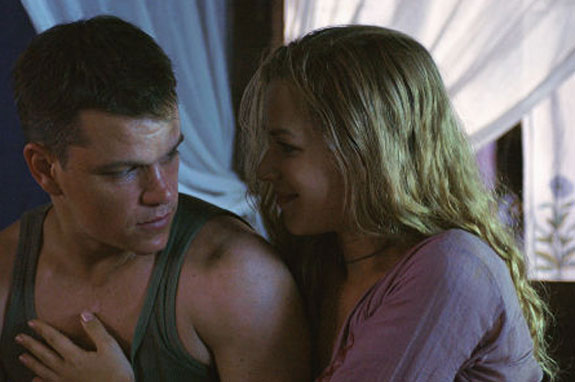 Right off the bat, Supremacy distances itself from the earlier Bourne by killing off one of the main characters, Franka Potente. That’s a ballsy move in any type of franchise situation. Say what you will about love interests in action flicks, but Franka is what made the first Bourne work. In the Bourne universe, Franka is essentially all that Jason Bourne has, and once she is stolen away, well, it is certain that bad things are bound to happen (though for me, not bad enough!). Her death is similar, in my mind at least, to what happens to Diana Rigg (the beautiful, beautiful Diana Rigg) in On Her Majesty’s Secret Service. In both films, you just don’t see the murder coming (especially so in Supremacy) and it really throws the protagonist for a loop. Plotwise, it did serve to make the film a little spastic, insomuch as what the audience now wants is pure vengeance, ala Deathwish, but what we get is more of a whodunit. In fact, I don’t think Damon’s Jason Bourne kills more than one person in the entire film (and that really was self-defense), though he does beat the living snot out of several.

Yes, so, a CIA op goes south when two agents get killed and Bourne is framed for their deaths. Enter CIA field director Pamela Landy (Joan Allen). In the only dumb part of the movie, as she is trying to track down the identity of Bourne (a phony fingerprint is planted) she uncovers the “Treadware” (or whatever it’s called) operation that “created” Bourne and his brotherhood of sheeky meeky (that’s German for “really hip”) assassins. However, before she can ascertain Bourne’s identity she needs “Level 5” clearance. So, she flies to Virginia and the CIA director dude is like, “OK, fuck it, you have clearance.” It was just so casual that if you stopped and thought about it–like I did–you wonder why they would bother having secret clearance at all. Anyhow, she learns who Bourne is and gets all kind of permission to kill him. Now of course, Bourne is pissed-off (though not pissed-off enough if you ask me) so he is going to Berlin to presumably kill Landy. In a very cool scene that was unfortunately exposed by the previews, Bourne sets up shop with a sniping rifle across from the CIA office and has both Landy and Nicky (the silly Stiles) in his crosshairs while he talks to them on the phone. I was itching for some blood, because, hey, it’s a movie, but Bourne (apparently) is really not all that into being a genetically modified cold-blooded killer. He decides he is going to get to the bottom of things before he lets the vengeance flow. 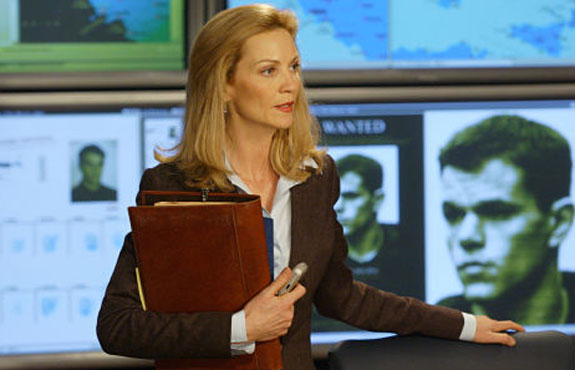 Large parts of the movie involve every cop, sniper, mercenary, taxi-driver and crossing guard in a given city knowing exactly who and where Bourne is, and him evading them. Very cat and mouse and quite thrilling. In my favorite scene from the film, he sets up a meeting between him and Nicky because she ran the field office in Paris back when Bourne was “active.” Now, if you read my review of Identity, as screenwriter Tony Gilroy apparently did (and yes I am egomaniacal enough to presume that Hollywood hacks spend their free time reading Ruthless rather than say getting pate de fois gras enemas or whatever the hell is popular in “the biz” circles these days), you know that for me, Stiles was the single dumbest part of the first film. In fact, before sitting down to watch Supremacy I was prepared to be totally annoyed by her very presence. However, they do a good job with Nicky this time out, making her essentially useless, and in the film only long enough to get Ruthlessly brow-beaten by Bourne. OK, true, she does get to deliver the film’s dumbest monologue about “They (Bourne-type super-robo-more-than-human-agents) don’t make mistakes. Everything they do is pre-meditated. They’re perfect,” but it only lasts for a minute. She is supposed to meet him alone in Alexanderplatz but naturally the CIA opts to plant fifty or so field agents, snipers, etc. at the meeting point. It does make you wonder why or if the German government would go along with such a sketchy idea when all the CIA is doing is cleaning up their own internal mess, but it is probably best not to wonder about such multinational problems and just sit back and enjoy. Anyhow, Bourne grabs Nicky and evades the massive dragnet and then just lets her have it. He lets her know how much Maria (Potente) meant to him and now that he has nothing to live for, he is not going to stop until his grievances are redressed. My fantasy of holding a .45 to Julia Stiles’s skull notwithstanding, it really was a fantastic, powerful scene.

Like in the first Bourne, much has been made of the car chase. And yes, it was a very good car chase with at least three really memorable sequences. The best one being after about ninety straight seconds of jump cuts from Damon’s face, to the car’s pedals to the action on the street, there is a nice long shot of his car power-sliding around a corner. Love that shit. Of course, there was the now requisite shot of the cars speeding insanely through oncoming traffic in a tunnel (Ronin rewrote that one, man. It’s like “bullet time” for cars) and yes, the fact that Bourne’s vehicle gets rammed by at least two dozen other cars and doesn’t so much as blow a tire, let alone is able to outrun (practically) everybody, bugged me. However, the conclusion to the chase was novel. And that is very important. Because really, when you get down to it, so much of all action films is how to make the commonplace novel; how to make it interesting again for the viewer who has seen this exact type of shit dozens of times (in my case, due in large part to the 80s Action Guide, almost countless). For instance, there is this really great foot chase through the streets of Berlin and I remember thinking, “OK, I know Bourne gets away. They better make it nifty.” Luckily, they did. In fact, the foot chase was better than the car chase. Actually, the foot chase (another one) that led right up to the car chase was really top shelf. Especially the vodka bit.

As you have gathered, flaws aside, I really enjoyed The Bourne Supremacy. Much more than I was expecting to. It is the rare sequel (Godfather II, Empire Strikes Back) that supersedes the original in basically everyway possible. Though I was sad to see Franka bite it like that, the filmmakers held it together and basically fixed everything about the first film that I found objectionable. True, I found the climax and ending of Supremacy, not bad per say, but, well choppy and a tad unsatisfying. And the whole thing where Bourne goes and apologizes to the daughter of two people that he killed years earlier was a little trite and pretty unbelievable. I have to say though, that it really doesn’t matter. The Bourne Supremacy is a good movie that offers up intelligence and intrigue along with a very healthy serving of action. It is well worth your time.