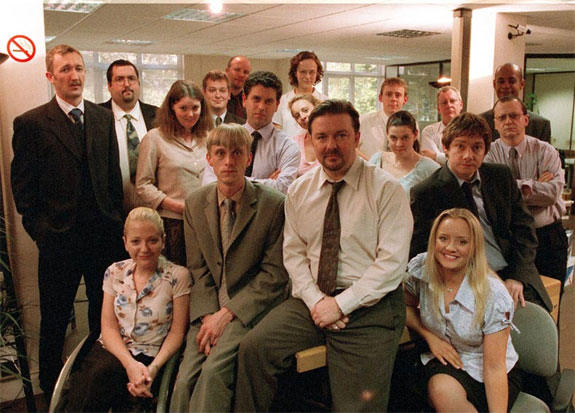 Memorable TV characters have come and gone throughout the years, but none as simultaneously loveable and loathsome as Mr. David Brent, played by the brilliant Ricky Gervais. Did I say brilliant? You bet your ass I did. Gervais inhabits this character so fully and with such complexity — he’s smarmy, offensive, endearing, cheeky, hilarious, and clueless, often in the same scene — that we marvel at his innate talent. Moreover, he’s entirely believable; creating the sort of boss that exists throughout the world as an example of how even the smallest crumb of authority will turn any man into a major league asshole. He’s demeaning to his employees, almost always crass and boorish, and easily the laziest man ever to rise through the ranks of a major corporation, but I would sign up to work in his office any day of the week. Hell, I’d probably do it for free.

The Office, my personal selection as the best overall program on television during the past decade, had the good sense to hang around for only two seasons, long before even a trace of staleness set in. I might long for more (the final episode was painful to watch as I knew it was truly over), but to the credit of the cast and crew, they left with their dignity intact. Not everything was resolved of course, but this might signify the acceptance of open-endedness by the British that is unfamiliar to shallow Americans. Okay, Are You Being Served? held on by its fingernails for at least a season too long, and that EastEnders thing is in at least its fourth decade, but I still believe my point is valid. Few American shows ever have the courage to leave an audience wanting more, which speaks to our stupidity and our greed. Now that both seasons are available on DVD, it is imperative for anyone who does not have BBC America to either rent or buy this modern classic.

The Office takes place at Wernham Hogg, a paper company in Slough, a dull town that breeds apathy, disgust, and boredom. In order to maintain even a semblance of sanity, the workers resort to a neverending series of pranks, usually at the expense of the humorless Gareth, a frightening looking young man who never tires of reminding us of his service in the Territorial Army. The most relentless prankster is Tim, a 30-ish loser who still lives at home, and is one of the few who knows that he’s throwing his life away in a flurry of mindless labor. And then we have Dawn, the receptionist who flirts with Tim, but maintains her engagement with the dreary Lee, who works in the warehouse. Other memorable characters include Chris Finch (a typically dickish sales rep), Keith (an overweight drone who does little but stare at his computer), and Jennifer, the manager of the outfit who sees through David’s transparent bullshit. What makes these characters so memorable is that they are (in a phrase I use often, but only when I mean it) so much themselves. For example, we love David because, despite his obvious insecurities, he believes the crap he peddles, and would be genuinely shocked to know how much his fellow employees hate him. Or perhaps hate is too strong a word, although they certainly find him a source of unintentional amusement.

The show also rises above the clutter of TV’s wasteland by rejecting the shopworn idea that plots must move in a linear, predictable fashion with clear starts and finishes. With The Office, each episode just sort of “begins,” and as the show is shot as a pseudo-documentary, we are privileged to watch a level of self-awareness on the part of the characters that would be doomed to failure in a thousand other, lesser programs. When David utters a remark that stuns the office with its insensitivity, Tim will glance at the camera in disbelief and for some reason, it seems the most natural response. He seems to be saying, “Did you catch that? Am I crazy, or did that tosser just say what I thought he said?” The stories are also occasionally interrupted by character “interviews,” where we learn more information about each person, or hear “confidential” commentary that might not be acceptable to the rest of the staff. And then there’s the background action, best demonstrated by one of the funniest sights I’ve seen in years. As Tim is cynically explaining the professionalism of the office, the camera darts to a hyena-like David as he lords over a man who is having his pants pulled off by a cheering crowd. The struggling man is stripped clean, right down to his genitals (which are blurred out). Because the scene develops out of nowhere, we laugh at its absurdity, but we never question its authenticity. Yes, we say, this could very well happen at a place like Wernham Hogg.

Over the course of the short series, we watch office politics reign, business mergers develop, redundancies take effect, and the usual crap we all put up with in office life to give us the illusion of community (office parties, theme days, etc.) But this is more than a live-action Dilbert. For one, it’s actually funny, taking the madness of the corporate world and adding just a dash of the bizarre to create its own unique mix. Everything we see no doubt happens somewhere in this world, and people like this no doubt exist. As the Brits are much more class conscious than Americans (hell, we still refuse to admit that class exists, as if economic status had no impact on one’s identity), we can see how jealously each person guards their position (i.e. David, who, while technically doing nothing in the course of a day, does have a title, which means everything). David is also a firm believer in the power of positive thinking, which means little more than pounding obvious, clichéd catch phrases into the heads of “his people.” But in the end, he is so desperate for flattery and affirmation that there is no end to his shameless mugging and dismal efforts to be “one of the guys.”

Still, no review is ever really capable of capturing the essence of this show — the dialogue — which, much to my surprise, is not improvised. Perhaps I am just a silly American who loves to hear British accents, but everything these people say is made funnier by how they say it. The American version that is unfortunately on its way will certainly fail, even if the words are recited verbatim. Let’s face it; the Brits simply understand comic delivery better than we do, which is why our “hilarity” is so often forced. I am one of the lonely few who finds most of Monty Python’s catalog obscenely overrated [Ed Note: Ditto], but at least the tone usually seemed right. Moreover, I find that the British are much more willing to tackle actual issues in their comedy, rather than situations that exist in a safe, decontextualized universe (take Friends, which might as well have been set in Cracker City, Idaho for all the NYC flavor it brought to the proceedings). The employees of Wernham Hogg are of their town, of their class, and of their country as much as is humanly possible.

The DVDs are loaded with extras, from the documentary How I Made The Office, to deleted scenes and video diaries. There’s even English subtitles for those unfamiliar with British slang, which might not be a bad idea for more virginal ears. But above all, we have these precious few episodes; rare evidence indeed that TV can be smart, sharp, funny, and pointed without being obvious. Yes, these people are funny because they act in a manner contrary to polite society, but we also recognize a central truth — we fuck around on the job because without such a release, we’d be more likely to bring guns to the cubicle than the latest sexual device with which to torture the guy we all love to hate.