I’m sure a film of this nature would be far more inviting with a bit of pot to smooth things over, but as my addiction relates to the world of food, I can relate to the plight of two people who desperately crave their favorite snack at an ungodly hour. After all, I’m the sort of guy who has contemplated ordering a pizza within an hour of returning from a restaurant; and I’ve been damn close to having that 24-hour hoagie place send over a few French Dips after the clock had struck 2 AM. Simply put, the munchies are not limited to stoners, and I too would drive miles out of my way to secure a meal. Remember, you’re talking to a person who nearly drove to Cheyenne, Wyoming in order to scarf down a high calorie/fat/grease-laden Monster Burger not found in Colorado. I’m sure Matt & Brooke Cale Go to Hardee’s would have lacked the high drama and desperation (well, at least the drama), but the payoff would no doubt have been just as sweet. Harold and Kumar do in fact reach their destination, and their unbridled passion for burgers and fries (shot like a porno, and for good reason) is the stuff of dreams for anyone with a bottomless stomach. 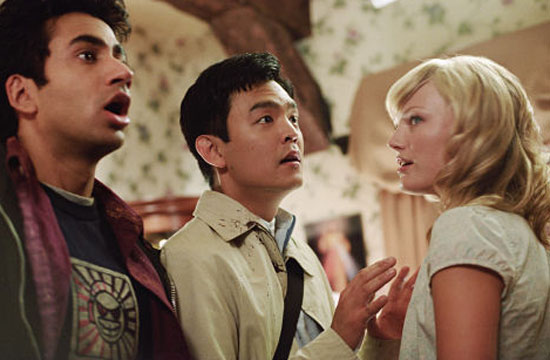 Before that much-deserved money shot, Harold and Kumar have a night of Kafka-esque absurdity, that is if I wanted to misuse “Kafka-esque” in order to appear wise and knowing. They encounter thugs, crooked cops, convenience store clerks, drug dealers, and vapid sorority chicks with predictable results, although there was something more going on than mere escape. I wouldn’t go as far as some critics who have described this film as “insightful on racial issues,” but enough stereotypes are brought forth to make it worthwhile. I guess. This is best, or most obviously seen in a jail sequence, where a soft-spoken black man sits for no apparent reason, while Harold awaits his fate (he accidentally punched a cop). Kumar seeks to spring him, so he calls in a shooting, which improbably empties the entire building. How the cops behave when they return is surely a commentary on how it’s far too easy to assume that when dealing with crime, blacks must be involved. Mississippi Burning it ain’t, but like many other satires (the underrated Undercover Brother comes to mind, which also features Neil Patrick Harris), they poke us in the ribs while going for cheap laughs first and foremost. After all, exploiting stereotypes (Asians are bookish and compliant, Indians look and sound like Apu, blacks are militant and prone to violence) can often be a source of wisdom. Yes, even here.

Of course, even with the half-hearted attempt at racial politics, we still get killer racoons, exposed breasts, and car chases. And needless to say, the precious laptop containing Harold’s work is destroyed, although I didn’t expect it to come after the pair rode an escaped cheetah through the woods. Still, it’s worth a small, barely audible giggle when Kumar, sneaking around a hospital to find the stash of medical marijuana, is able to conduct on-the-spot surgery. Yes, yes, we all know that if an Indian isn’t shouting “Thank you, come again,” he’s making rounds in some hospital. What’s more, such skills appear to be “natural.” And aren’t all Indians stuck with the last name “Patel?” Even Glengarry Glen Ross couldn’t get past that one. Oh, and people who live for “extreme sports” are indeed as obnoxious as they are portrayed in this film, and I’ll be one of the first to dismiss their group’s complaints. There’s something about snowboarding that makes a person a fucking dick. 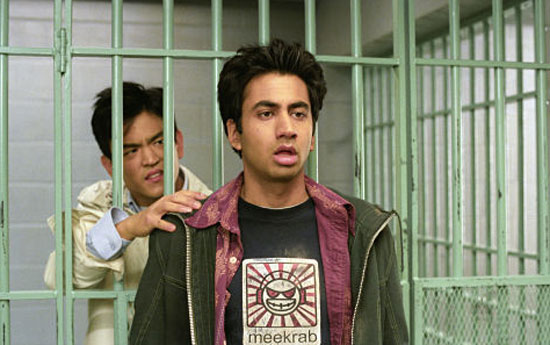 The film ends with two obligatory scenes — where Harold finally musters the courage to ask out the hot chick from down the hall, and when he tells off his obnoxious supervisor in order to retrieve his dignity. I could have done without the former, as it sets up an inevitable sequel where the two will travel to Amsterdam. In fact, I have no doubt that we’re about to see a franchise unfold. Oh yeah, Leiner also “crafted” 2000’s Dude, Where’s My Car?, so I guess the series is already underway. So while I wouldn’t recommend this film to anyone seeking elevated entertainment, I must admit that junk of this kind has its place in the pop culture landscape. It’s far more harmless than most shit I see during the course of a year, and at least its social statements are largely accidental and laid back, rather than pushy and insistent. Absent any overt agenda, it’s simply a celebration of getting high, eating bad (but delicious) food, and refusing to take life seriously. I guess there’s no harm in that.