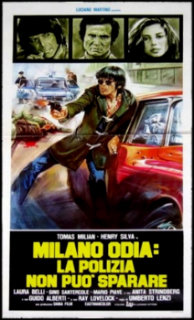 “There is a reason for every living creature… with one exception.” I prefer the disclaimer that closes the US trailer, even if it turned out to be bullshit – “CAUTION: Morally and sexually this motion picture may shock you. But it’s an experience in psycho-sadism you will never forget.” The same trailer has the title as The Death Dealer, and compares it with the films “Clock work orange” and “Deathwish (sic).”

I found some French subtitles that were not of much help, given that in four years of high school French class our teacher didn’t go beyond etre and avoir. “Mr. X” was far from right when he claimed that Italian and Spanish were the same language, but I could still manage.

With or without subtitles, could you explain the plot?

Tomas Milian plays Giulio Sacchi, an arrogant and psychotic thug despised by his more professional peers. Fed up with playing second fiddle, he enlists the help of a couple of idiots to kidnap a rich acquaintance of his girlfriend and enter the big time once and for all.

In a rare instance of him playing a good guy, Henry Silva is cast as chief inspector Walter Grandi.

Sacchi goes around pontificating and telling everybody what a genius he is and how he’s got some grand design in mind, only to commit petty thefts when nobody is looking. He’s actually worse when he gets into a serious job: prone to shoot when people yell at him a little too loudly, his “brilliant” angle for the kidnapping is to kill the girl once they have the ransom money. After murdering her girlfriend in order to erase his link to the crime, he boasts to his chums about his cold blood. Unsurprisingly, he is a big coward who bawls when cornered, more as a strategy than as a reaction, and frequently indulges in the kind of pleading that gets results out of disgust rather than pity, as the listener will put up with his demands to get his wretched countenance immediately out of sight. Not that these traits are specifically Italian (not completely, anyway), but the language and body gestures add to them a very characteristic flavor which helps make the Poliziotteschi genre special. I liked the part when the girlfriend says that Sacchi feels like Napoleon when he drinks, and Sacchi retorts that Napoleon’s penis was the size of his index finger. Charming fellow.

As for his grooming and appearance, Sacchi usually wears the unofficial uniform of the Italian 70s hoodlum: while their contemporary French counterparts continued to don trenchcoats, suits and fedoras with a quiet dignity, Sacchi and his pals preferred leather or army jackets, bell-bottoms and aviator sunglasses. A bit of trimming would render his hairdo a veritable cockhelmet, and a bed scene reveals his upper body as hairless, though wild jet-black manes can be seen protruding through the edges of his red underpants. Yes, red. I rest my case.

When the girl they intend to kidnap escapes into a nearby mansion, Sacchi and his underlings crash it and proceed to victimize the household. Sacchi shoots an old guy and, to make a show of his unparalleled meanness, disregards the two females present and forces the remaining man to fellate him at gunpoint. Afterwards, the three are hanged from a lamp and tortured until Sacchi mows them down in one of his nervous fits. And when the kidnapped girl refuses to write a letter to his father because she knows they will kill her, Sacchi nonchalantly admits that yes, they are going to kill her, but she can choose between a fast death or one alternating bouts of slashing and raping. It’s sadistic mostly because Sacchi delights in watching her react to this news.

Sacchi has a pretty, well connected girlfriend (Swedish beauty Anita Strindberg), and needless to say he treats her like shit. Common sense tells me that a classy woman like her wouldn’t fall for a lowlife like Sacchi, but life on planet Earth has taught me otherwise. He milks her for money whenever he needs it (read: all the fucking time) and their intimate moments together are of the rough and forced kind, though the director is crass enough to give us a closeup of her orgasmic smiles. There’s also an old undertaker who sells guns on the side; he boasts of his tranny-looking wife’s glorious past as a prostitute while she’s within earshot. Finally, I’m not sure how, but I suspect that Sacchi choosing the man for the blowjob was meant to be demeaning to women.

Since the kidnappers have senselessly killed a bunch of people, chief inspector Grandi correctly surmises that they won’t leave the girl alive once they get the money. The girl’s father wants to pay, so Grandi calls a favor from his pals at the telephone company to record the father’s conversations with the kidnappers (hehe). Grandi supplants the father and makes the drop, then returns with an army of cops a friggin’ hour later. Of course, by that time Sacchi has already killed the girl. Good job, chief.

After that, all the evidence the cops have on Sacchi is his relationship with the dead girlfriend, as the guy doesn’t even have a rap sheet, but Grandi insists unsuccessfully on charging him; his main “proof” is that Sacchi was an onlooker jeering on a completely unrelated crime scene. Come on… At the end, Grandi just walks up to Sacchi and shoots him. It was kinda anticlimactic.

13. I’m including a child that is accidentally gunned down through a door, even though we never see her.

Well, it is very watchable, and Milian delivers as one of the greatest scumbags ever. But it is a far cry from the tour of depravity the trailer and several reviews had me expecting. Especially considering Umberto Lenzi’s record as the director of several of those cannibal movies I’m in no hurry to see. Even the fellatio scene was more of a huh? moment than a prelude to Pasolini’s Salò. That disappointment is not the movie’s fault, anyway: just think of it as a good Dirty Harry knockoff with most of the running time devoted to Scorpio. As I said, pretty entertaining.

The film is at its best when it allows Sacchi to ramble on with his bullshit, and is fairly believable in dealing with the bloody ways in which a simple plan can go wrong when you have a couple of nitwits following a deluded slimeball, especially one who shares the worst traits of Perry Smith and Dick Hickock and none of their redeeming qualities. It is far less convincing when it tries to have it both ways, with Sacchi’s schemes and alibis somehow working out in leaving him with the loot and no conviction. He is less a master criminal than a Master Shake, and I don’t buy that a guy that stoops so low as to pick on helpless vending machines doesn’t have a police record.

Another solid melody by the Maestro, anticipating his work for The Untouchables. Also, it is one of the themes John Zorn choose on his awesome album of Morricone covers. Hell, both Milian and Silva are featured on the case art.