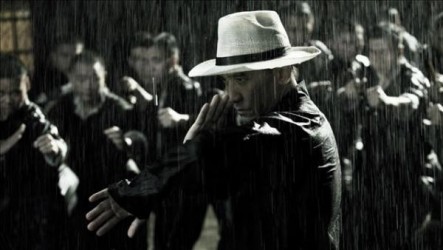 Fair Value of The Grandmaster: $6. If you want a date movie that’s also a kung fu film, this will suffice. If you’re looking for kung fu action, you’ll want to stay away.

Dear Mr. Wong Kar Wai, I would like to make a small suggestion. If you are making a biopic about the man famous for training Bruce Lee in the art of wing chun, could you possibly consider HAVING AT LEAST ONE FRICKING SCENE DEDICATED TO TRAINING THE GREATEST MARTIAL ARTIST OF THE 20TH CENTURY? It’s like making a movie about Aristotle that never mentions Alexander; like making a bio of the Notorious B.I.G. that never refers to Puff Daddy.

For those who don’t know: Yip Man (played by Ton Leung) was the person largely responsible for making Wing Chun into the dominant kung fu style of Hong Kong. He was an unpretentious, straightforward fighter, one whose simplicity of style has since become the template for Kung Fu in the world’s imagination. He was a police man, an officer of the Kuomingtang, who lost everything during the second world war and built his academy from scratch. He was also Bruce Lee’s mentor.

If you go by Wong Kar Wai’s film, however, he was mostly the ineffective love interest of Gong Er (Ziyi Zhang), daughter of Northern kung fu master Gong Yutian (Qingshang Wang). The film spends as much time upon the struggles of her life as it does on Yip Man. Oh, his daughters die of starvation in Japanese occupied Foshan? Pay that no mind, Yip’s got to see the 63 hands style again. There’s also a stock villain, in the form of colloborator Ma San (Jin Zhang).

The Grandmaster suffers from bad pacing and distracting tangents. While real life may not be dramatically paced, the good biographer knows how to truncate the story to tell the tale they want to emphasize. This film gets the riches to rags sequence, but then fails to pay much attention to Yip Man’s reinvention. World War 2 and the Chinese civil war may have precluded Yip Man’s championship in martial arts exhibits, but that was never his triumphThe end result is a film that is anti-climatic and unfocused, a wandering collection of vignettes. 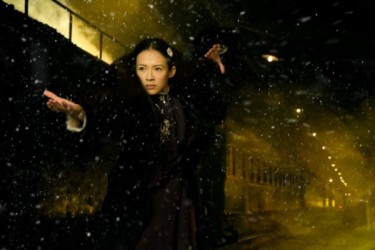 Winner of Beijing’s Prestigious Crying Monkey Award: In the comedy Tropic Thunder, method actor Kirk Lazarus’ latest oscar-bait film is referred to as a winner of this fictional award. I’d suggest that Wong Kar Wai is creeping into the realm of becoming his own parody. The director is a one trick pony, dramatically: handsome actors and actresses staring longingly at one another, but repressed by the chaos of modernizing China and the strictures of Confucian conduct. If the trailers had marketed this as another Wong Kar Wai romance, that might be alright. But this film is badly mis-marketed as a kung fu action film.

Never Mind the Script, how was the fight choreography? Bullet time has poisoned the action world. Directors are now so focused on the composition of their shots and the speed of their cuts that they eschew the simple physical poetry of letting two martial artists go at it. Everything is either frozen in bullet time or shredded into jump cuts. The kinesthetics of the fight sequences is undercut. The result is that the physicality of the fighting is reduced in favor of a few beautiful shots. It’s less of actual martial arts, and more a series of paintings of martial arts practitioners. 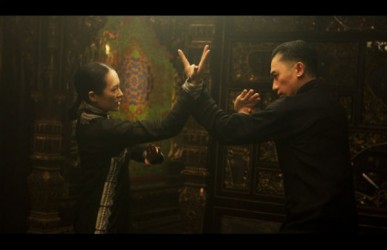 Old Monkey Hangs Up His Badge: Empathy has always been Wong Kar Wai’s strong suit, and it lends itself to the one intriguing part of this film. The trope of a trivial action being used as a test to gauge another’s kung fu skill is an old trope; but with Wong Kar Wai, it becomes a more intangible, mysterious process. Martial arts has always been seen as an alchemy of the soul worked through the furnace of a body, and The Grandmaster reaches into the philosophy of kung fu better than many other films. Those subtleties were the best part of the film.

Also, the fight sequences are beautiful and elemental: rain-storms, falling snow at a train station. The entire film is a paean to that strange, fragile period of pre-Maoist China, a world undecided on what was to be modernized and what needed to be preserved. Men wearing panama hats and changshan robes. The entire film carries a forlorn, elegiac tone, befitting a film about loss and destruction. In the end, The Grandmaster is unique and beautiful, but also incoherent, and aimless.