Let me dispense with the praise as quickly as possible — Northfork is a beautifully shot motion picture. The cinematography is among the best I have seen in quite some time and the style, both deliberate and contemplative, works well with the isolated Montana scenery. For the first five minutes or so, when I was lost in a sea of color and windswept plains, I genuinely felt as if I was about to see something unique and powerful. The images were so overwhelming and the mood so fraught with apprehension that I was certain the film would continue to be a joyful, developing mystery. Okay, I thought, here is a film by the Polish brothers — the team that brought us the fascinating Twin Falls Idaho — so what could go wrong? They are quirky and sometimes bizarre, but I was willing to run with it if the film stayed true to the opening scenes. Alas, ohmyfuckinggod alas, it is all downhill from there. I am hard-pressed to think of another film that started with such promise only to crash and burn with such blatant disregard for the audience. The film continued its spiral for the remainder of its running time; so much so that I have no doubt it will be included on my list of the worst films of the year. In fact, if one is required to take intentions into account, it just might be the worst. I can take pretentious. I can even handle obnoxious. But pathetic, dull, incoherent, rambling, and embarrassing (as well as the aforementioned pretentious and obnoxious)? Not in one sitting, thank you.

The film has a great (and apparently factual) premise — the town of Northfork, Montana is about to be flooded to make way for a dam and lakeside community. Government agents enter the town in order to convince the remaining holdouts that they have no choice in the matter and should accept their $1,000 and get out before the water comes rushing down. James Woods portrays one of these men, and to his credit he tries to play it straight, but his performance is betrayed by dialogue that is completely out of step and annoyingly anachronistic. His partner (also his son) is named Willis, which leads to — no kidding — the line “What are you talking about Willis?” Two problems: one, it is 1955, and two, the reference is, even for 2003 audiences, hopelessly dated, as Diff’rent Strokes hasn’t been popular for twenty years. So who exactly is to be amused by such a line? But it gets much, much worse. 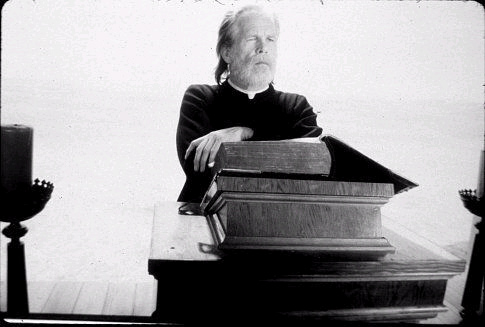 The “story” also concerns a groups of eccentric ghosts, or angels, or something, because I am not sure who the fuck they were supposed to be. Continuing, these people, or spirits, consist of a tea-obsessed Brit, a wig-wearing angel-woman played by Darryl Hannah, a mute cowboy dressed in a suit decorated with musical notes, and a scientist of sorts (played by Anthony Edwards, who deserves a Razzie nomination, if not a win) with wooden hands and funky glasses. It is impossible to convey how insipid these people are, and even more difficult to discover what relevance they have to the film. They claim to be in Northfork to find an angel, and spend most of their time napping, drinking tea, or examining art. At one point a little boy arrives claiming to be the angel they are looking for and he shows them the marks where his halo and wings were surgically removed. Then angel feathers are examined by Edwards and — no kidding again — he says (scrutinzing and dismissing several feathers), “Duck….duck…..goose.” Am I in a goddamn amusement park? An acid-soaked dream? Utter Hell? A high school production of Once Upon a Mattress? Even as I describe these happenings I find my head splitting with thunderous pain. It is all as confusing and as dull as it sounds, although it is certainly much worse than that.

So we watch the agents drive from remote location to remote location and again, we admire the view, but once the characters resume interaction, we are at a loss as to what it all means. There’s a preacher played by Nick Nolte who consoles a sick young boy who has been abandoned by his parents, inhabiting scenes that literally go nowhere. I’m convinced Polish set up a camera at Nolte’s rehab resort and assumed his drunken ravings would be right at home in this garbled mess. There’s also a defiant holdout who lives in an ark with his two wives and assorted animal heads. And there’s also a strange diner where the waitress (easily the ugliest actress ever featured on screen) speaks like a man and the only thing on the menu appears to be chicken soup. And I’m still trying to figure out what that thing was that looked like a mutant dog walking on stilts. It moves through the film until it is shot by a tranquilizer dart. Stop me before I tell you about the character who obsesses over nicks in his car. And are my veins emptied yet? 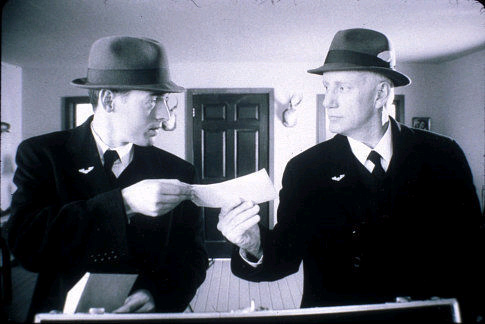 Because there is a lonely despair to the images, I was reminded of both Antonioni and Malick, but the Polish Brothers seem to use such influences only as springboards to channel the worst of David Lynch. Any seriousness is always undermined with silly dialogue, quirky twists, and outrageous characters. The moment the film might move towards genuine emotion, some nonsense about angel wings comes around and knocks us right back into the twilight zone. Had this film had compelling characters and a complex story to complement the cinematic style, this might have been a small classic, or at the very least a watchable diversion. Instead, I was left bored and indifferent when I wasn’t slapping my head with frustration. Is this a metaphor? An allegory? Symbolic of something or other? A parable? Who the fuck knows? I am all in favor of challenging an audience to formulate its own interpretations about a film, but I am frustrated when it is obvious that the filmmakers themselves seem to be at a loss for meaning. I have no doubt all of this sounded good on paper, but the subject matter as presented seems un-filmable on its face. And of course there is too much about God, too much crap about redemption, and too much film school trickery trying to be “unconventional.” I would rank this with a travesty like Van Sant’s Even Cowgirls Get the Blues in terms of achieving that rare combination of pretension, forced humor, disjointed tone, and indecipherable message. It is clear in both cases that something is being said to somebody, but all thinking people have already left the theater. Unfortunately, I stayed until the end, and I am the poorer for it.