It took 121 years, but has Redbox finally stocked the definitive account of Lizzie Borden?

Its here at last, fellow Shithousers, and the truth is exactly as we expected. It seems sweet, acquitted Lizzie never died. Shes just resting until she can, whenever the time is right, possess the bodies of assorted Fall River women to carry out the revenge shes long sought.

Revenge? Why, if she was found not guilty by a jury of her peers?

Im not certain, but it might have something to do with her being crazy as all get out. Oh, sure, and that shes a lesbian.

But shes innocent of the crimes, right?

She killed her father, yes, but not her mother. Its complicated.

So a guilty woman went free? Again, why seek revenge if you got away with it?

Just hold on, Ill explain in a moment. First, lets talk about the movie itself.

I dont want to talk about the movie; its a piece of shit.

Well, yes, but.hey, Im supposed to be reviewing this movie, not you.

But youre me, dude.

And youre just talking to yourself.

Wouldnt be the first time. 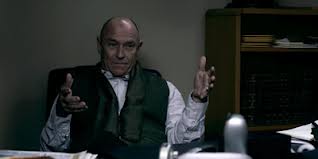 Ill be honest. For 69 minutes, it was one of the least interesting motion pictures ever to spew from the bowels of Redbox. Seriously, nothing happened. Some chick named Lizzie Allen, haunted by the demons of the past, freaks out, takes pills, goes to therapy, drinks wine, and hears noises. Her boyfriend tries to understand, but is getting impatient. Ghosts appear, bitch drinks more wine, and she begs her therapist for stronger pills. Oh, and did I mention the therapist is Corbin Bernsen? It was either this or jumping off a bridge.

So is she the reincarnation of Lizzie Borden? Might explain the hallucinations.

I dont know, it doesnt matter. I damn near shut the movie off a dozen times. Ill repeat  the first 69 minutes are the least interesting 69 minutes Ive ever experienced, up to and including standing in line, waiting on hold with customer service, and conversing with a woman.

So what about the Cable Guy?

The Cable Guy. Jared, to be exact. I have no idea why the scene exists, what its supposed to accomplish, and what it has to do with the story, but Im thinking Gerry Bednob owed the director a favor, and swore to Vishnu hed appear in his movie whenever the fuck he finally made one. Only Bednob was probably drunk, the promise made over a decade ago, and he sure as hell didnt think hed actually be held to this shit. But in the middle of the movie, for no reason whatsoever, Bednob shows up as a rambling, profanity-spewing cable guy. He mumbles something that sounds like piss fuck Christ, plays with a wire or two, then reveals that he has 16 children  well, 17, but one is retarded. He then says Lizzy is sexy but stupid, and that she cant get internet service because her boyfriend will use it to find other, better pussy. He swears some more, flirts shamelessly, then leaves as quickly as he came. Sure, it killed four minutes of screen time, but when it feels like forty-four, whats the use?

Gotta stop you right there, buddy. Lizzys boyfriend, Jason. Did he really have a Chinese symbol tattoo? No ones that trendy these days, right?

Two of em, right on the upper arm. So Leif Holt, wherever you are, I hope you never work again. Like my hope will have anything to do with it. 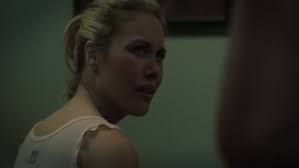 Okay, so the Cable Guy sequence stopped the movie cold. Back to business soon after?

The business of boredom, yes. Looking at my notes, I see  Thirty-eight minutes in.NOTHING HAPPENING. Jason and Lizzy have sex, but we see neither exposed breast nor vagina. And its consensual, so who cares. Jason then takes a good 3-4 minutes to make coffee, so I know the full process in case I ever forget. Then theres a mysterious door out back, which takes another ten minutes of discussion. Meanwhile, ghosts with axes appear here and there, and Lizzy breaks a wine glass and bleeds over the sink. Only she doesnt. Now Jason is acting strange. Shit, almost forgot.a phone rings. Because twenty-somethings have land lines.

But doesnt Jason finally get behind that door?

Yes, but after taking 5-6 minutes to look through mementos and old newspaper articles, were sent right back to Lizzys bad dreams and complaints to her therapist. Then a chick in a hot maids outfit shows up and doesnt fuck Lizzy. 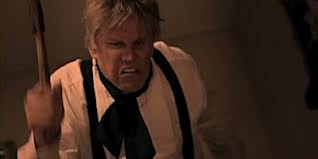 Then the movie hits the 69-minute mark. Hits it like a diamond bullet to the forehead. Should I get excited now?

Let me be clear  while the first 69 minutes are the worst ever committed to celluloid, the final 13 are among the greatest shit Ive ever seen. They are almost enough  just short, sadly  to send Lizzie to the top of my Best of the Year list. For it is at minute 69, friends, that we get Busey. Gary Busey. He is Lizzie Bordens father. He is drunk, disheveled, and furious as fuck. Bridget, the maid, is on the bed. Mr. Borden is on the warpath, screaming about his barren wife and her refusal to give him a son. He wants a son! You see, his daughter Lizzie is a lesbian, and as such, an abomination before God. HE WANTS A SON! Naturally, he attacks the maid. Mere pawing turns to brutal lust, tits are exposed, and Mr. Borden rapes Bridget in a way only Gary Busey can: fast, cheap, and out of control, a tsunami of chattering chompers. As the violated maid weeps on the bed, Busey shrieks  I squirted you, and youre carrying my baby now! Right at that moment, Mrs. Borden comes in with an axe. The attack is half-assed, and Busey quickly gets the upper hand. Full of post-coital fire, he hacks his wife to pieces for the crime of, you guessed it, not giving him a son. As if all that wasnt enough, Busey stares at the dead woman and spits, Finally, now Im happy. No lie, I applauded.

But wait, history tells me that Mr. Borden also died. It cant end there, right?

Lizzie Borden finally enters the room and sees her murdered mother. Enraged, she picks up the axe and proceeds to destroy her father. While we only see the Busey dummy from behind, the axe blows are thunderous and a pure delight, as each one sends Buseys hair into a flailing fit, like hes sticking his finger in a light socket. Im pretty sure we get all 41 whacks, thank the stars.

So, the crime is solved at last.

Yep. What puzzled historians, writers, and criminologists for over a century has at last been brought to light by a grade-Z movie director. Lifes funny like that. 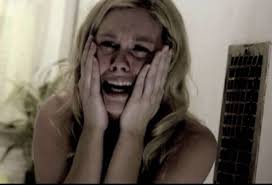 But what about the modern-day Lizzy? How does her story end?

First, as she witnesses the 1892 murders herself, Lizzy is sent into a dream-like state. Next, she wakes up a bloody mess, with Jason sliced to ribbons on the couch. And that maid chick, who may or may not have actually existed, is also dead. Feeling responsible, Lizzy puts a gun in her mouth and pulls the trigger. This brings about another return to the past, where we see Lizzys trauma finally laid bare. You see, she watched as her mother killed her father, right after he warned her, Theres something wrong with mommy! Right down the line, all of Lizzys ancestors have murdered their husbands and/or fathers. Killers throughout the ages. To reinforce this point, Lizzy wakes up from her suicide and grins straight into the camera.

Until the world runs out of women. Its why pills, psychiatrists, booze, even lobotomies, never work. The spirit of Lizzie Borden resides in them all, murdering the human race until they stop producing sons. Once accomplished, all women can live happily as lesbians, the way nature intended.

Is that really what you took from this?

That, and also how patience is a virtue. Man, Ill never shut off a DVD again. Any damn day of the week, 69 minutes of torture is worth a bakers dozen of Busey rape.