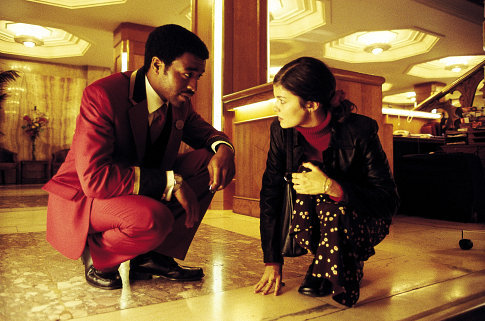 By combining social commentary with a crackling good story, all told with a sure hand and mastery of the form, director Stephen Frears has made the most satsifying film of the year. By turns tragic and witty, this film got it right with every scene and never compromised its firm purpose of highlighting the plight of immigrants in England’s underground economy. And again, this is no self-righteous tale; this is solid entertainment that, for once, believes supporting characters are as important as the central figures. I have no criticisms — I loved every moment of it.

I never would have thought it possible, but here is a film about a death and dying that never resorts to cheap sentimentality. The characters in this wonderful talk-fest are intellectually stimulating, charming, and yes, completely full of themselves. But that’s what makes this such a joy; these are complex people, full of self-pity, rage, and yet, no regrets. The words are the highlight here, combining acerbic wit, politics, and much-deserved jabs at everyone from Mother Theresa to dippy Americans. In the end, we care about these people not because they are perfect, but rather because they are greatly flawed. Frankly, they would have it no other way.

The Revolution Will Not Be Televised

Easily the most overtly political film of the year, this documentary chronicles the attempted overthrow of Venezuela’s Hugo Chavez by the military and ruling elite. Initially a puff-piece about the beloved left-wing leader, the film runs head first into the coup as it is happening, making for first-rate drama. More than that, we come to understand the stakes — a populist champion, leader of one of the world’s most important oil producers, threatens to institute reforms that will redistribute wealth and threaten American interests. When we hear Bush administration officials all but endorse putting Chavez’s head on a stick, we come face to face with our shameful hypocrisy. A rare film that actually matters.

Despite the odds, a documentary about the love of reading that is both insightful and extremely entertaining. As we watch the filmmaker attempt to track down a beloved author who only penned one novel and then disappeared, we too remember the books of our past and how words can transform our lives. Still, there is a tone of sadness throughout as we realize that in a way, this film is an elegy for the solitary reader, eclipsed as he is by an ADD-infected culture that values instant gratification and hollow images over imagination and depth. It also helps that the director is a bit surly and self-important, which steers the film away from a sentimental tone. He is obsessive and a little bit nutty, but with interesting people, isn’t this usually the case?

The Secret Lives of Dentists

For once, a portrait of marriage and family that hits all the right notes. Campbell Scott and Hope Davis portray married dentists who are stuck in the deepest of ruts, seeing no way out except through bitterness, rage, and of course, adultery. Scott is at the top of his game, walking a fine line between anger and resignation, and if the Oscars meant anything at all, they’d find a nomination for him somewhere. To watch Scott juggle his busy work life with three uncontrollable little girls is to watch someone with more courage (or blind stupidity) than any soldier landing at Normandy. How he does it without grabbing a loaded weapon is beyond any rational explanation. But lest you think this is a depressing slog through the madness of family life, it is important to remember that it’s also funny as hell.

Steve James’ follow-up to Hoop Dreams is not as significant in terms of its scope, but I’ll be damned if it isn’t as absorbing. Despite its nearly 2 1/2 hour length, I was enthralled throughout, which seemed odd given that the main subject was a disturbed pedophile. James is also a participant in his own work as he searches for Stevie, a young man who has fallen off the rails ever since James lost contact years before. James feels guilty, yet it is clear that very little could have been done to stop the descent into criminality. More than anything, this film refuses to judge those involved, which allows us to understand and empathize without feeling morally superior. Sadly, Stevie’s tale of neglect, apathy, and abuse is all too common.

Unfortunately, this delightfully mean-spirited tale is unlikely to be seen by anyone outside the festival circuit. One of the few films this year to hold genuine surprises, it involves a woman’s cold-hearted revenge against her vain, adulterous husband. Or is he innocent of all charges? The film succeeds because it is never clear whether or not the husband is guilty of anything, and the wife could just as easily be insane as betrayed. The film is essentially a two-person drama, and the tension is as real as it gets. Still, I loved this film primarily for its sadistic tone and for once, it refuses to compromise or tack on a “redemptive” ending. And how many films have the courage to present an entire cast of unsympathetic creeps?

A “coming of age” tale that is, thankfully, unsparing and gritty without insisting on cheap resolutions. And the Scottish accents are so thick that they require subtitles. Director Ken Loach has great sympathy for the working classes, which succeeds here because he refuses to romanticize their plight. Life is tough and capitalism breeds as many victims as it does heroes, but these people also make moral choices that affect their futures in ways unconnected to distant market forces. These are people on the edge, and Loach presents them with fairness and authenticity. The desperation and grimy surroundings never depress, however, for we are too caught up in the human drama to notice.

Outside of anything else, Gus Van Sant’s powerful film warrants inclusion for having the guts to show teens killing each other without any explanation whatsoever. From coast to coast, people hated this movie because it made no effort to explain its characters, offering only behavior and incident rather than clear moral lines. For that, Van Sant has made a film for the ages; one that refuses to succumb to the hysteria of the moment and asks that we consider true ambiguity and powerlessness in a culture that insists on simplicity and cartoonish boogey men. And of course teens die by the score, which alone should qualify Van Sant for the Nobel Prize.

This collection of short films (each 11 minutes, 9 seconds, and one frame in length) about the September 11 tragedy rounds out my top ten list for one simple reason: it dares to take other sides and insists that in order to successfully deal with terrorism, we must first understand more than our own pain. No one attempts to justify the 9/11 attacks (even if they did, so what?), but each of these filmmakers believe that few things are as simple as right and wrong, killers and victims. Ranging from Iran to Mexico, France to Japan, these films give the 9/11 events a new depth of feeling and ask questions no one in this country would dare ask when emotions are still raw. For example, what about the other 9/11, when, in 1973, a democratically elected leader was overthrown in Chile with American aid and support? Or what about children in Afghanistan, who are building shelters to protect themselves from the bombs about to fall, even though they had nothing to do with the events of that day? Still, the best effort comes from Alejandro Gonzalez Inarritu (Amores Perros, 21 Grams), who reduces the pain of that day to the sound of falling bodies hitting the pavement. As we watch, and as we listen, we understand the very essence of horror.