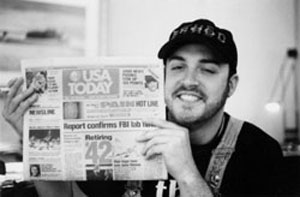 Watching arrogant prick Troy Duffy (The Boondock Saints) self-destruct was not only the most life-affirming, joyous experience of the year, but it allowed me to establish a front-runner by which all other 2004 movies were to be judged. As a documentary, it’s pitch-perfect and brilliantly crafted; there’s genuine tension, drama, and scenes of nerve-racking despair. At times we can’t believe that any one human being could be this vile, but each time such a thought crossed my mind, Duffy managed to top himself. And as a piece of pure entertainment — I laughed my ass off when I wasn’t rocking with delight — nothing else even comes close. There’s plenty to chew on, from the corrosive effect of instant celebrity, to the sadistically hyper-masculine world of the movie industry (it’s a wonder anything gets done with all the chest-thumping going on), but at the center is Troy — disturbed, cruel, and arguably the most deserving of comeuppance in the history of the planet.

Eternal Sunshine of the Spotless Mind 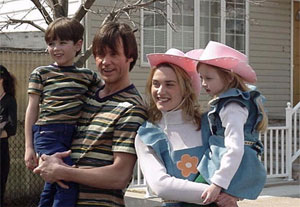 I’m usually resistant to gimmicky cinema, as it tends to emphasize self-conscious style over genuine insight. Not so in this case, as screenwriter Charlie Kaufman has managed to craft an often inpenetrable puzzle that hits the heart and the head in equal doses. Just as I thought Hollywood had run out of ideas in the love department, they help bring to life a movie that challenges us to reconsider the very nature of its existence. And those pesky memories — are they worth saving? And would we banish them forever if the source of even a moment’s unhappiness? Jim Carrey is delightfully restrained, while Kate Winslet — seemingly his opposite in every way — drives him crazy because he’s exactly what he needs. There are big ideas afoot, from identity and fear, to self-image and reality, but this is above all a challenging work that always assumes we’re intelligent enough to keep up. It’s a show-off to be sure, but it earns our respect. 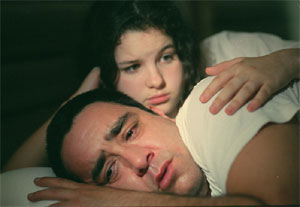 Todd Solondz literally commands worship, and he once again blasts away at our prejudices, fears, and neuroses until we come up begging for air. As one of the most deliberately offensive films of the year (and as such, a pure delight), Palindromes is an acid-filled stew of abortion politics, race, religion, handicapped children, and rape that simply defies description, thank Christ. There’s not a red state anywhere that would embrace it, and I doubt they’d even show it. Essentially, if you hold anything sacred, you’re going to leave in tatters. But it’s more than a freak show, merely content to rub our noses in depravity. Instead, Solondz crafts the most pessimistic message of the year; that when it comes down to it, human beings don’t really change over the course of their lives, and while we might alter the paint from time to time, we’re still as full of shit at the end as we were in the beginning. By having his central character portrayed by over a half-dozen different actresses (and I do mean different), the film creates the perfect visual metaphor for the director’s vision. And there’s a show-stopper: big Mama Sunshine’s household of child rejects and defectives, who just happen to be in an “Up With People” style band. Ahh, it’s good to be home.

Read more of what Matt Cale has to say here 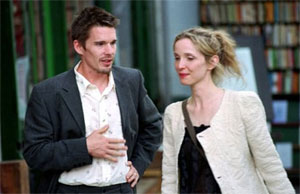 Can a film about old friends engaged in conversation really rise above its simple premise? Indeed, and in ways I couldn’t have imagined. Ethan Hawke and Julie Delpy reunite in Paris nine years after Before Sunrise, and simply walk around the city, ride along the Seine, and chat away about the usual things: life, love, literature, work, regret, and yes, even the simple pleasures. Admittedly, it sounds unbearably precious, but these are intelligent, well-rounded individuals; not suffocatingly pretentious, but authentic and true. Perhaps it was the old world setting, or perhaps it was the mood of the moment, but the film drifts along so confidently (and without feeling rushed or forced) that it manages to be both stimulating and moving all at the same time. And while there’s always going to be a “will they or won’t they?” cloud to contend with, it’s not about any particular payoff. Instead, it considers the depressing reality that real connections — deeply felt, unspoken, and above all, intellectual — are as fleeting as life itself, and as such, those moments of realization even more valuable. It’s a tale of unrequited love that gets it right. 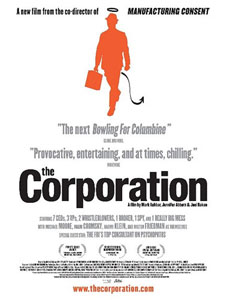 One of the few documentaries from 2004 that didn’t reduce all of life’s misery to one George W. Bush (as tempting as that would be), although he certainly plays a part. No, this film is after bigger game; the very system that is both inevitable and inescapable, yet just as impossible to comprehend. Whether as a history lesson (we learn when and how corporations were granted status as individuals) or a social document, this is, as I said in my full review, one of the most depressing films ever made, mainly because we can see what’s killing us, yet we are helpless to stop it. After all, what else could we ever hope to do? Embrace communism? And that’s the conceit: market capitalism is dehumanizing, mean-spirited, callous, and destructive, but there really is no alternative, at least if we are to accept human nature at face value. This is a lengthy offering — complete with interviews, anecdotes, and hilarious (and sad) visits with the worst we have to offer — but every moment is devoted to the long, slow march through humanity’s twilight, a lonely place where we’ll donate billions to the victims of tragedy one day, only to privatize their rainwater the next. If only our emasculated media had a tenth of this film’s courage. 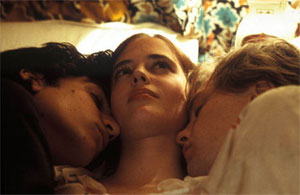 Bernardo Bertolucci’s glorious ode to romance, the cinema, and yes, the tragedy of self-delusion. Set in Paris around that revolutionary time of 1968, three characters live for the movies, for poetry, and for uninhibited sexual expression, only to watch their world shattered by an impractical adherence to idealism. The film’s insight stems from an unwillingness to give itself over to any one side, preferring instead a balance that acknowledges beauty, but also the cold air of daily living. Nevertheless, I felt captured by the world of these young people, with only the silver screen to guide them through endless days of trivia, museum tours, and group baths. And let’s not forget Bertolucci’s perceptive eye for color, warmth, and the passion for place. The old master is back, hopefully to stay. 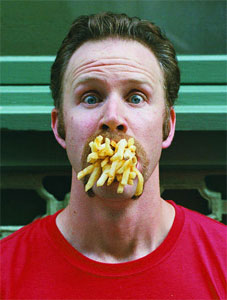 Some humorless fucks have tried to steal this film’s thunder by claiming filmmaker Morgan Spurlock manipulated the truth, or that “eating any one thing for 30 days will liquify your innards,” as if that should be a comfort. Forget the “details” of his experiment and consider his larger argument — that we are fat, lazy, unhealthy, and doomed to sink into our couches out of apathy and indolence. What’s more, we’re polluting our schools with this filth because administrators are desperate to replace funds that have been cut by greedy taxpayers. But this is no screed: Spurlock always puts the laughs first, for what better way to face a future of diabetic comas and endless rounds of heart surgery than with a hearty chuckle? This is an American tale after all, where a nation of slobbering fools obsessed with the bigger and the better clog assorted arteries while much of the world starves.

Guerrilla: The Taking of Patty Hearst 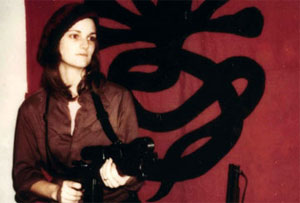 For some a conventional documentary about a familiar subject; for me an insightful, exciting, and dare I say, illuminating ride through a crazy time in our nation’s history. Combining news footage with shots of bank robberies and street violence I had never seen, this film doesn’t try to romanticize or “explain” its subject, although I have a fondness for the days when people tried to overthrow the government with little more than a dream and a few automatic rifles. All of these people — whether SLA, Black Panthers, or MOVE — were doomed to be gunned down like dogs, but that’s the appeal. How thrilling it must have been to watch society come apart in such dramatic fashion. Now, we’re content to fade away with a whisper. Grand gestures, then, helped define the era. And I’ll be damned if I didn’t fall for old Patty; the rich shit turned radical who had the balls to ridicule her clueless fiancé on live television for no greater crime than, well, being a pig.

If one of the central obligations of the bio-pic is to capture a particular time and place, Bill Condon’s Kinsey succeeds wonderfully, as it brings to life an era where sexuality was forced to retreat in shame, hiding behind religion and calls for moral renewal. Not like we’d know about such things. But standing at the center is Liam Neeson as Alfred Kinsey, one of the world’s most important scientists, then and now. Neeson brilliantly captures the essential detachment of Kinsey, so that we can easily believe that despite being immersed in sex night and day, he never really gave it a second thought. His passion and lack of judgment helped us understand how we really behave in the bedroom, and the guardians of decency have resented him for it ever since. This is, despite the odds, an inspiring tale of dedication, commitment, and the common perversions that bind us all together.

Dawn of the Dead 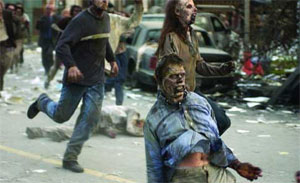 Zombies. Exploding zombies. Zombies who can run like cheetahs and kill with even greater efficiency. Shots to the head; blood, pus, and stench-filled gore to spare. Humor, charm, and a bus surrounded by tens of thousands of the buggers. Fuckin’-a, dude.

The Aviator, Nobody Knows, Sideways, The Merchant of Venice, The Mother, Shaun of the Dead, Vera Drake, Monster Road, The Agronomist.