When the history of cinema in the early 21st century is written, the entry for X2: X-Men United will read something like this: “A lot of people went to see the sequel due to the fact that the first movie was surprisingly good. Those people then left the theater, smiled, stretched and never spoke of the movie again.” X2 wasn’t bad per se. In fact, it sort of wasn’t anything. It just wasn’t. Before I get too ahead of myself, I need to explain that this review is poisoned in a way because the guitar player in my band (shameless plug: www.tarawa.us) was one of the 3D animators for X2, and I saw it with him, and for months leading up to the release he had been telling me all sorts of insider poop. (Like the fact that most of the special effects budget went into the really dull/hippie Cerebro–at the expense of some other scenes that really could have used the money. Like the opening one with Nightcrawler.) 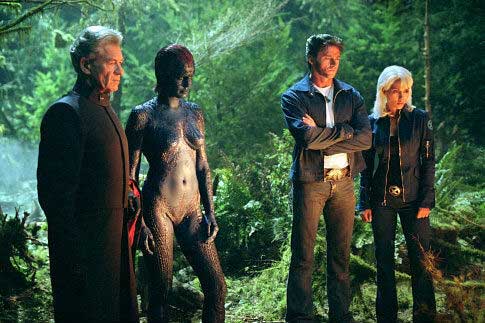 See, the first X-Men took everyone by surprise. It was a “load of fun” and it birthed the world yet another hunky Australian megastar (Jackman, taking his place alongside Russell Crowe, Guy Pearce, Hugo Weaving and soon, Eric Bana) who can pull off a decent enough American accent and more importantly act circles around the Afflecks and that one dude who’s name I can’t remember [Ed Note: Ed Burns]. Also, Halle Berry went out and won herself an Oscar for Best Actress in between the two X-Men films, as well as starring in the latest Bond flick. So, her celebrity cache is up through the roof. Also, the ever-mugging Ian McKellen became hyper-world famous as Gandalf from those Lord of the Rings movies. As a result, people suddenly realized what a tremendous star vehicle the sequel to X-Men would be. People who really weren’t all that interested the first time around. Did I say people? I meant the living dead who run Hollywood’s studios. Which means they broke out their pocketbooks (constructing the largest movie set in the history of Canada) and called their corporate bed-buddies (Dr. Pepper has more screen time than Colossus) in order to make X-Men United bigger and badder than the first. Of course, what you are left with is a movie devoid of a soul. I usually get into a little plot dissection right about now, but really, why bother? No need to do an autopsy when the cause of death is so obvious.

My biggest gripe, besides the numbingly boring Cerebro scenes, is the fact that there are nine or so principle characters all stealing screen time from Wolverine. Dear Brian Singer: with the possible exceptions of Rogue and Magneto, no one gives a flying fuck about any character other than Wolverine. In fact, why don’t you just go ahead and get busy on that all-Wolverine spin-off I’ve heard rumors about? Could you imagine? Man, that would be so good. I used to sort of read X-Men comics when I was a pup, but I was really into the Wolverine-only editions. Just him, skulking around in an alley behind some bar, clad in a trench coat and a sideways top hat, chewing his cigar and being confronted by three would-be muggers who he warns, “If I were you, I’d leave me alone.” And then he beats ’em all up while lecturing the wannabe assailants about his adamantium-enhanced skeleton and his special healing mutation. That’s all we want to see. You don’t even need much of a plot, Mr. Singer. Just two to three times the plot you felt was good enough for X2. Oh, and Cerebro was really dumb and no one liked it and it took up a full third of the movie and the idea that anybody can kill billions of people just by thinking about it, no matter how smart they are, is dumb even by comic book standards. Can we just have some more Wolverine in the next one, please? 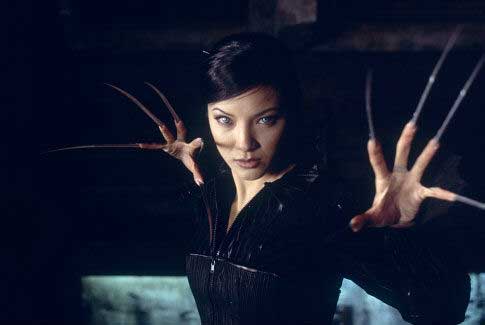 I wish I had more to say. The best part of this move was the preview for The Matrix Reloaded, which turned out to be an order of magnitude worse than X2. So, while it wasn’t a total stinker, I’ve seen much better. The middle of X2 was both blurry and rushed. There should have been more story about Wolverine and Scott Summers’ love spat over Dr. Grey and less about Dr. X and Storm. There were too many fucking little kids running around everywhere and they were a little too cute. It was really cool that Wolverine was actually killing (as in murdering, dead) all the government dudes that were breaking into the Mutant Academy. Too bad he had to escape in a Mazda. Brian Cox’s character, William Stryker, was a typical over-the-top bad guy. “The only way we’ll ever be safe, Mr. President, is to kill all the Mutants!” I guess fatherless 15-year-old boys might find Stryker intimidating, but he is so dimensionless that I was bored with the General by sentence three. The entire finale, where the loosely United X-Men break into Stryker’s secret science lab (where Wolverine was–surprise!–created) was just dullsville, man. I mean, you got two guys in wheelchairs and a little girl mindfucking each other for twenty minutes. I guess Wolverine’s fight with his nemesis, Yuriko Oyama, was cool, but she was pretty much a female Darth Maul. Tough-looking, but otherwise another totally flat and boring character. And, like all things must, X2: X-Men United eventually ended. At least it didn’t have a rave.

***My awesome internet nerd buddy, Charles F., likes to correct my sad lack of sci-fi knowledge and send me 27-page single-spaced documents about how the Merovingians are the lost Israeli tribe of Dan. Apparently, Doc Grey is not dead. To quote Charles, “Once again, Jonny, I must correct you. Jean Grey is not dead. As a somewhat reader of X-Men, you should know that she is The Phoenix and will be back for the 3rd episode.”

To which I answer: That is too bad, because you know they are going to introduce five more primary characters the next time out, with four more mega-corporate product tie-ins, all stealing valuable screen time from Wolverine. Oh, and Charles, when you get laid, take some pictures. We’d like to see ’em.

Side note: Director-boy Singer who made both X-Mens and The Usual Suspects is gay. It is rumored by some that he intentionally adds overtly gay plot lines to all of his movies. Some being Scott Essman who writes for the LA TImes. If you click here you can purchase that article from the Times archives for $2.50. We’re much too poor to buy it for you.