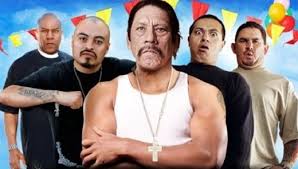 The movie was inexplicably made in 2010, inexplicably put on the shelf, then inexplicably released to Redbox three years later. Inexplicably, this is the movies third title. At inception, they called it Perfect Sunday. Then, perhaps thinking the masses would confuse it for a football movie, they changed it to Lean Like a Cholo. When even that proved too Mexican for a movie made exclusively for Mexicans, they adopted the current moniker. Funny thing, though, as its not really about lowriders. I mean, one plays a significant part in the story, but once it disappears, its never seen again. Hell, there are more pit bulls in the movie than actual lowriders. Like thats a surprise.

Danny Trejo! Whats with this fucking man crush? This is, like, your third Trejo movie in a week.

Our Man Danny is on the DVD cover. He damn near gets top billing. The possibilities appeared endless. The reality is bait and switch. The old shell game. Lies on top of more lies. Trejo appears, yes, but only for fifteen seconds. Seriously, fifteen actual seconds. He fills the screen, shirtless as always, mumbles something about doing your thing, then disappears. He goes nameless, but appears in the credits as O.G. Ive never been so disappointed in all my life. Well, I have, just not today. He had less screen time than mamas menudo. 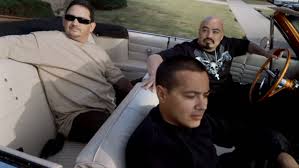 Im not going to be as patient this time around. I want the story from A to Z. Stop fucking around.

The movie begins with a Mexican father listening at the door as his son, Junior, fucks a love doll. It ends with John Amos organizing a front lawn boxing match between a Mexican and a black man. Tucked between those two fixed points are a hootchie car wash, two rounds of gay baiting, misogynistic song lyrics, and some dude standing curbside selling oranges.

So exactly what I expected.

Exactly what you expected.

But we get some hopping, right? Some of that crazy car bouncing shit?

How do you think the plot is set in motion? Lefty loves his car. Its his pride and joy. When Crazy Loc, the areas black gangsta, rides up and challenges Leftys manhood, shits on. They bet 25 large on who can bounce the highest. Crazy knows thats $25,000, but Lefty thinks it means $2,500. Crazy wins because he cheats. And then he wants his money. Unable to pay, Lefty lets him have his car until he can come up with the cash. Based on a short story by John Steinbeck.

Okay, so Lefty is the main character. And Junior is his dimwitted brother. So whos Spanky?

Hes the youngest brother, and hes an obsessive nose picker. Wipes all that shit on his pants.

Ive thought about it. 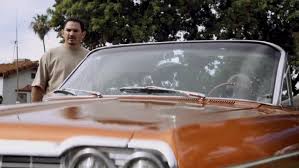 Good Times and Roots, and this is what hes left with. For some reason, his character has a Mexican accent. But he has words of wisdom: Think of a woman as a kitchen appliance. Turn her on, then let her simmer. It will be the nicest thing said about women the entire movie.

You saying Chicano culture isnt sensitive to the female persuasion?

I heard bitch, hootchie, and ho. Not a single maam, in case youre curious. When women appeared, they were in slo-mo with bouncy big tits. A car wash scene was staged just to have them playing with sponges and getting all wet. Then they did it all again just in case we didnt get the point. There was a song that praised the sort of woman who was super thick and shaped like a Coca-Cola bottle. The sister character wore a shirt that said, I Heart Chisme. Chisme is gossip. Her I Heart Books garment was apparently at the cleaners. When the females spoke, they were grating, unnerving, and shrill. They only wanted to make out or lie. Theyre all obsessed with taking selfies. The only female not a whore was a mute who loved to cook. And when men speak to females, they say this:

Man: You know you stink?

Man: Cause you the shit!

In fairness, the men fare little better. I mean, didnt the father say his job was as a professional lotto player? 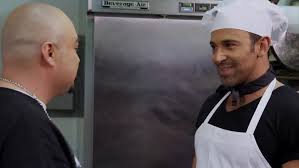 Okay, so Lefty needs $25,000 to get his car back. Lemme guess  a wacky series of job searches ensues?

They sell oranges. Then corn. Then they hold fake seminars talking up green energy (natural fertilizer means, Uncle Jose will come shit on your apple tree). They try working at a bakery. Then as exterminators. Even bathroom attendants. They also steal cats and return them for the reward money. Adding a dash of realism, they are asked by a white man to stage a robbery so he can appear manly to his wife. Needless to say, the money isnt raised until a midget enters the scene.

Mexicans sure do love them some midgets.

And god love em for doing so. Its the most enlightened aspect of their culture. They keep them front and center, not in the shadows like us Americans. Midgets are, like, everywhere in Mexico. All over television, too. And he wouldnt be a Mexican midget unless he was stinking rich and obsessed with sex.

So why do Mexicans hate Guatemalans?

I have no idea. But theyre portrayed in this movie as weirdos and freaks who like to shoot poison darts at people. And apparently they jealously guard the orange trade and will kill if necessary.

I havent even mentioned the homophobia. There are two gay characters in American Lowrider, and both are sick bastards who want to rape straight men. Like the baker who said to Lefty, Put your frosting all over my sticky buns like a pearl necklace. 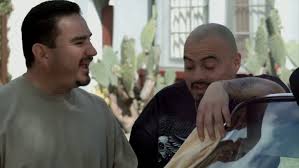 That could be interpreted any number of ways.

He also says, I need you to toss my salad.

Tell me about it.

So the midget delivers the $25K. I guess all is well?

Well enough to throw a party, which means Paisa, the resident loco gangster, is going to use a hootchie to steal the cash, which is located in Leftys sock underneath his bed. 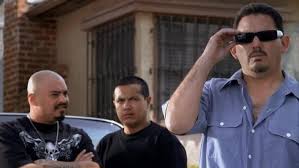 Is this where John Amos comes in?

Yep. He aint gonna have any of this shit, and Lefty and Paisa have to settle things like men. Hence the boxing match. Hector and Crazy Loc also exchange blows. But Lefty gets his car, Hector gets the girl, and menudo is once again served.

After the 2012 election, Im assuming were just going to have to take it?

We have to take it.