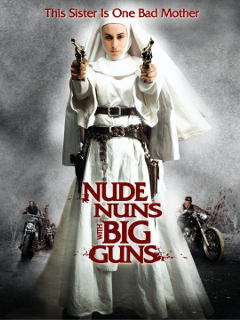 I have a question: Am I going to Hell? It’s not that I’ve done terrible things; it’s that I’ve watched terrible movies. Sure, I’ve also used the Lord’s name in vain, masturbated, and once drunkenly referred to Barack Obama as a “house negro” on the Internet, but in my opinion, these are minor transgressions. I can’t imagine God would be too upset about these things. Besides, if God allows movies like this to be made, then he can’t really get upset if I watch them, right? (Don’t answer that).

Anyway, this is a film about women of the cloth, often in various states of undress, that possess firearms physically larger than the average firearm available on the market. It may be difficult to deduce all of that from the film’s title, which gives Quantum of Solace a run for its money in terms of subtle esotericism, but there it is. You can stop hurting your mind trying to figure it out now. That’s what I’m here for.

This is also a film about rape. I don’t mean like what George Lucas did to Star Wars. I mean rape-rape. Now, seeing as this film is a throwback to exploitation classics, it wouldn’t be prudent to criticize the film too harshly for its numerous rape scenes, especially as the rapists are all punished by the end of the film. No, what I would like to criticize is myself for watching this film in its entirety and enjoying it. I really don’t know what my problem is. 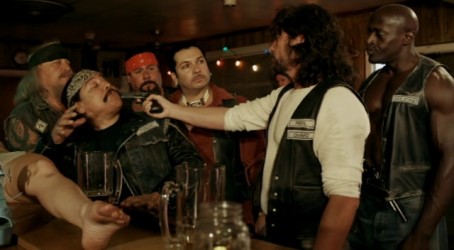 Long ago, I watched Barbarian Queen for the first time and found myself revolted by the rape scenes in that film. It’s not that Barbarian Queen is especially brutal in that respect, but it was the first film I can remember watching that followed that type of exploitation mindset to its logical conclusion. I can remember just wanting to throw up several times during my initial viewing of that film. I guess I just couldn’t take it at the time. I just couldn’t hang.

Now, it’s a decade later, I’m watching Nude Nuns with Big Guns, and an African-American gentleman named “Kickstand” commences with raping a middle-aged housewife in front of her teenage daughter. Meanwhile, I sit with my drunken fried rice and keep eating it while the rape transpires. At one point, a laugh escapes me, a half-eaten slice of bell pepper falling from my mouth and landing back in the rice. I didn’t laugh because I thought the scene was funny, but at the absurdity and pointless brutality of it all. At least, that’s what I’ve been telling myself. Oh God, what have I become? 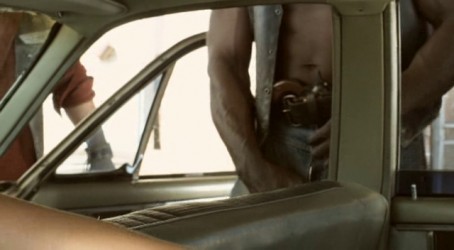 I’m still not sure whether my reaction to this scene is a sign of emotional development or emotional degeneration, and I’m not sure I’ll like the answer when it is conclusively determined. Well, whatever. It’s not the first time I’ve suspected that I might be crazy. If nothing else, it provides yet another example of the effects of watching way too many bad movies. Note that I didn’t say that they were negative effects. In fact, I feel more alive than ever!

If I am allowed a brief digression, I feel compelled to admit that several weeks ago, I downloaded the music video of Jessie J’s “Domino” off of YouTube. On my first viewing, my reaction was, “What is the matter with this girl’s face?” I couldn’t quite articulate what the problem was, and I can’t now, but something about it just seemed off. “Man, this girl is kind of ugly,” I thought, as I continued to watch the video regularly over the course of about a week or so. Then, as always, I went to sleep one night and shortly thereafter found myself lying on top of her. It’s the way of the world, my friends. It’s how it always was, and how it will always be.

So if you watch enough bad movies that feature tasteless rape scenes, at some point, you’re going to laugh at them. Then you’re going to have difficulty looking at yourself in the mirror afterward. I learned so much about myself watching this film. What can I say? Learning really is a lifelong process!

Nude Nuns with Big Guns is a captivating tale about a man named Chavo, who runs some type of criminal gang focused on the distribution of narcotics. Chavo technically works for the church, and the priests of the church run the production side of the operation. Mixed up in this are Sister Sarah and Sister Angelina, two nuns who decide to go on a roaring rampage of revenge. Sarah received her divine mission while high on heroin, and her conversation with the Almighty seems to have been fairly in-depth. Angelina is her lover, and is the Robin to her Batman. Just from this summary, you can tell that you’re in for a world-class story here.

But, you know, I have to say that I wasn’t bored at any point while watching this movie. I tried watching The Internship recently, and while I was eventually successful, I had to watch it in 20 minute blocks because it was just too much. The bit with the Quidditch match and the geek manager yelling “Bangarang!” as a war cry disgusted me more than any of the scenes in this movie. By contrast, I had no such issues with Nude Nuns with Big Guns. I realized halfway through it that I… I was into it. I was on its wavelength. When a gentleman remarked to topless woman setting up a pool table, “Nice rack”, I got it. When Owen Wilson made some forced reference to the longstanding Emacs vs. vi debate, I felt more alone than I have in years. 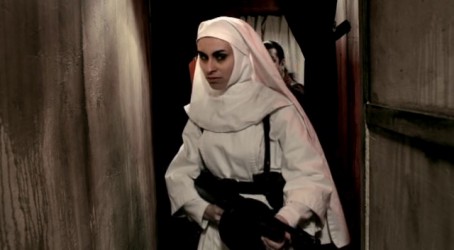 By the way, much of the action in this film takes place in either “The Cherry Popper” or “The Titty Flicker”. Yes, there is a definite bargain-basement Robert Rodriguez vibe to the proceedings, and the theme song of this film is more than a little reminiscent of the Planet Terror theme. However, this film is less funny and more brutal than any of Rodriguez’s offerings, and has more in common with 70’s exploitation flicks than anything more recent. This isn’t a criticism, just an observation. That’s all I do, really. I observe.

Anyway, I’d like to point out that “The Cherry Popper” is definitely the classier establishment of the two. “The Titty Flicker” consists of little more than some peepshow booths and some poorly-cleaned rooms in which prostitution takes place. My germophobia was ringing alarm bells in my head just watching the footage of it. By contrast, “The Cherry Popper” is more like a shitty bar with Christmas lights and bare breasts hanging in the background. It’s telling that the finale takes place in “The Titty Flicker”, and that Sister Sarah chooses that establishment for the location at which she guns down her adversaries. The place needed to be shut down for its numerous code violations, if nothing else. 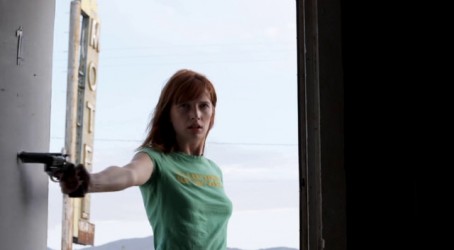 The bad guys in this film consist of several corrupt priests, an evil ugly nun, and Chavo’s gang of murdering rapists. Chavo may be one of the nastiest villains on film I’ve seen all year. Aside from his continual treating of objects like women, he threatens his underlings by pointing a loaded firearm at their genitals. He confronts a nun who stole a package of drugs during the opening sequence, killing both her and the drugs with one bullet. He’s just a very mean guy with obvious difficulty establishing meaningful relationships with other human beings. Also, he rapes women. The guy’s got problems, what can I say?

My favorite character in this film, though, was “Butch”, the lesbian proprietor of some rundown motel “in the bad part of town”. She makes out with a girl from “The Cherry Popper”, drinks her morning vodka at 3 in the afternoon, and valiantly enters Sister Sarah’s room without the protection of a bra. She also talks shit to one of Chavo’s henchman on the phone, and is easily the most competent of the bad guys in this film. Sure, she meets her end at the hands of Sister Sarah after Sarah tricks her into a lesbian makeout session, but who among us would really count that as a fault? Only Elvis had a death more glorious. 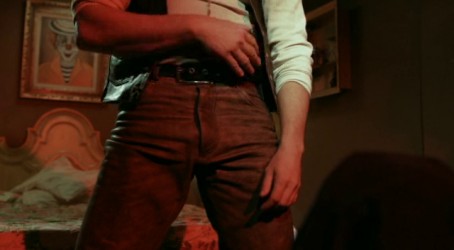 So anyway, the final showdown takes place as Sister Sarah walks into the room where Chavo is raping Sister Angelina. Is there no lock on the door, Chavo? Have you never heard of common courtesy? Prior to this, the rape commenced with a vertical wipe style scene transition, with the rape footage dropping down from the top of the screen. I didn’t laugh at that scene transition, but I did titter inwardly a little bit. Really, they could have stopped the film right there. It was over. Whatever they were trying to accomplish with this movie, I think they attained it.

And then Chavo gets shot in the penis. The End.