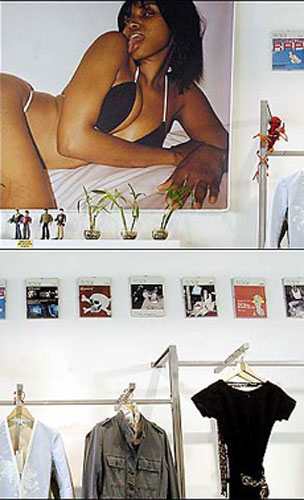 Slam Us Back Bitches, We Could Use The PR

Ruthless Reviews is, if nothing else, a feast of extreme opinions, hyperbole, and other assorted applications of the fine art of talking shit. So why would we be dissing on the notoriously shocking VICE magazine? Well, short answer is: when it comes to being a loudmouthed asshole, like anything else, theres a good way to do it and a bad way to do it, and that is why this article is called FUCK VICE rather than, say, WHEE, VICE or even YAY VICE XOXOXO.

1) In case you just clicked on this link by accident, Vice Magazine is this super-subversive magazine for people who are into coke, hookers, partying really hard, being popular and wearing the right clothes. And that is different from the average Wall Street day trader. . . how? Oh, I forgot, they dont wear suits. They wear clothes that are. . . SO BAD THEYRE GOOD! Like, IRONY. Wow, thanks for inventing irony, guys. Please tell me which trucker cap to buy, so I can be so un-hip that I am hip again, because that whole style is only like 20 years old and I am not sick of it yet. If I didnt read VICE I might have bought a trucker cap that was, like just plain BAD, and then I guess I would be a DONT.

Basically there is no difference between Vice readers and high-powered day-traders besides the degree of pretension.

2) Plus, what is up with The VICE FILTER where every fucking article sounds as if written by the SAME EXACT PERSON? You know; consciously junior-high-school sounding, making shocking statements but always in a deliberately offhand, casual way, and unable to write about anything for more than 400 words because they know hipsters cant fucking read. While Im on the subject of the Vice Filter, let me point out the obvious: fag = gimmick. those clothes are good or bad = gimmick. the world is going to end, lets do some heroin = gimmick. How many more issues can you keep flogging these dead horses? There is, in fact, a difference between self-awareness and self-parody, and you guys crossed it two-years ago.

3) They try to represent some edgy or fringe culture, but in fact they are as homogenized as Coca Cola. I mean, the shit was from Quebec but when I first saw it, but I could have sworn it was from LA or NYC Because of the generic hipster layout and sensibility. Way to seize the lowest common denominator, guys! Do you really want every city to be like the same exact place, with the same jaded poseurs taking the same drugs and having the same “Im so over it I have to get more and more disgusting everyday just to shock myself” attitude? Come to think of it. . . exactly why is being super-jaded so fucking important anyway? Isnt that like a DRAWBACK of too many drugs, rather than a good thing??? Is joking about child molestation pornos supposed to mean you have had a full and exciting life or something? Exactly how does that work?? If you are really so over-everything, why not get over sex and drugs, too, and actually write something creative? Even if you point out that cocaine and heroin can have bad effects on people, you give the impression that 99% of earths population is doing them RIGHT NOW, so basically you are nonetheless glamorizing it. So fuck you.

4) Lets look more closely at a typical vice statement, because we just have this much time on our hands. I typed 30 words blindfolded with my toes, and it came out like “EWEIiwenieiRI3283jnr23828Wfn238asdfjn 283urQ 32328.” Then I ran it through the VICE FILTER and it turned into: “If you wear Birkenstocks, you are a queer Gaylord because I am high on coke.” Which is weird, because when I ran the following sentence through the VICE FILTER, “Record crowds are expected to protest the Republican National Convention next week in Manhattan, the biggest such demonstrations since the Democratic Convention of 1968,” it came out, “Ass sucking fag-hippies; where’s my coke?”

Now, as far as I can tell, the subtext here is something like this: “Well, OBVIOUSLY not everyone who wears Birkenstocks is a terrible person. We are being DELIBERATELY childish here. Anyone with any brains is IN ON THE JOKE and wont get mad.” Ditto using the word fag in every article.”

When they say Only gaylords wear Birkenstocks, are we supposed to say, a ha ha, they are making fun of people who do not like Birkenstocks. They are homophobic, those Birkenstock haters. Good one, vice magazine.

No. Nobody reading ever thinks that.

Real satire, such as Phillip Roths OUR GANG (written over 30 years ago and still the bible of good bloodthirsty mockery), takes the form of a guy saying dumb shit with a straight face . . . But the whole point is THE GUY TALKING IS THE BAD GUY and everyone knows it. But the Vice style of satire doesnt make the reader laugh at the author, it allows the reader to laugh WITH the author at some hapless fool who wears unhip clothes, and laugh at fags, BUT the reader doesnt feel guilty about it because it sort of vaguely has the appearance of satire.

They just want to have their cake and eat it too; that is, they want to say dumb and shocking things but not be responsible for them. Its like that Simpsons episode where Krusty is like, “it was a JOKE!! When you give me that look, it was a JOKE.” Well I call BULLSHIT ON YOU.

You CANT have your cake and eat it too. If you really hate homosexuals/Birkenstocks, just come out and REALLY MEAN IT. If, on the other hand, you want to make a joke or lay down some satire, you better make sure you are the butt of the joke.

Its simply not a DO to say, You know, saying nigger just for shock value is kind of weak because then you are showing that you are not in on the joke, not elite. Basically being racist or shallow is ok; acting like a junior-high bully is awesome, but the biggest sin is to be sincere or take anything at face value, because that is provincial and unsophisticated. This is the mind-set of the hipster, and this is why I dont like this magazine.

4.5) Plus, what I said for shock-value stuff, also goes for so-bad-its-good irony. Basically irony is a smokescreen for insecure assholes who are so fashion-conscious that they are scared to have real opinions. Maybe the people who write for VICE are totally balls-out and extreme in their personal lives, but their joking but not/ its so uncool it is therefore cool but maybe Im joking writing style is a TOTAL cop-out and therefore its the very opposite of balls-out. Which would be, if I am not mistaken, balls-in.

6) You only see an Asian face there if its a drunk model with her top off or if its a lady artist who is quirky. Have you guys ever interviewed an Asian man about anything ever?

7) A long time ago, ‘subversive’ or (sigh) edgy publications were political; defining themselves against THE MAN. I mean EVERYONE from hippies to greasers to punks to you-name-it, any subculture worth its salt was at least paying lip service to individuality. But the whole cult of the hipster has done away with this, in favor of openly embracing popularity, fashion, and elitism for its own sake (rather than being elite because of commitment to certain ideals). Again, cokehead wall-street day-traders with trucker hats and far less money. Unless they have a trust fund. Which half of them do. And nowhere is this trend more clear than (sigh) Vice Magazine.

Jonny adds, in a different font:

8) They opened up a store in my neighborhood, and now people that live on Sanborn think they are special cause they live next to the Vice Shop. So, I don’t know who’s worse. People selling $90 t-shirts, or the morons whose sense of self-worth is elevated by their proximity to a store that sells $90 t-shirts. And then there’s the other fucking morons who buy the $90 t-shirts. None of whom live on Sanborn. Also, if you think employees of the Vice Store are making more money selling the most over-priced clothes in all of Silverlake (an accomplishment all on its own) than the kid next store whose nylon wasn’t torn up enough and had to work at the vintage clothes store, think again.

9) They didn’t open up a shop in Echo Park, (my old neighborhood) like American Apparel, did because Vice has no real balls. Furthermore, the average Vice reader would say, “Sweatshops are like totally rad. Cause, hippies hate sweatshops and I hate hippies and I am too stupid and self-absorbed to care about anything.”

9.5) When Vice first came out I was stoked, cause I learned that I wasn’t weird for taking coked-out Polaroids of girls with my cum on their face. Or at least I wasn’t alone. However, how the fuck could you guys be so one-note? It’s just baffling. I’m thinking it has a lot to do with the fact that when Vice first started, it was pretty groundbreaking in terms of its newness. It shocked a bunch of “writers” who before Vice had been writing even duller shit. So then these writers all completely appropriated the style of the first few issues and now we are left with the VICE FILTER.

And I continue, in my same font:

10) Some guy who wrote for Vice Tokyo tried to rape my best friend. Wow, is that edgy? or was he just kidding and Im not in on the joke. ?

Anyway, guys, please give up or, failing that, charge like $30 dollars an issue so that douche bags will have to choose between the new issue and those smokey and the bear mirror sunglasses, and then when they buy the magazine, they will be sad because they are not a DO.