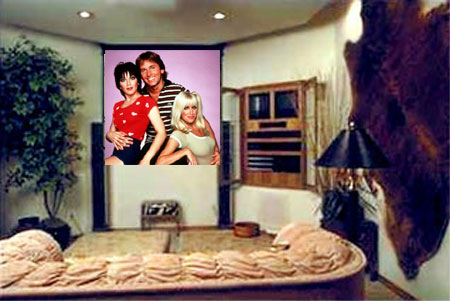 When it comes to TV, I am far from a snob. Because I have never considered the boob tube the cultural equivalent of the cinema, I have always regarded my TV watching as something I do to pass the time. That is not to say that there aren’t great shows of the past and present — even educational, enlightening, and groundbreaking programs — but I have found that, to my regret and shame, I have usually missed the boat. The list is embarrassing to reveal — The Sopranos, The West Wing, Six Feet Under, Deadwood, among others — although I am making up for lost ground by watching NBC’s now defunct Freaks and Geeks on DVD (the verdict: it’s pretty damn good). Because of this void in my pop culture diet, I turn to the indefensible; those programs that are intellectually and artistically bankrupt, yet I could (and would) watch if I heard them eminating from the living room. Most of these shows are long dead, but I love them all the same. They are the crap that makes TV a lasting, important institution.

Yes, I too mourned for John Ritter, not for his unmemorable turn in 8 Simple Rules, but for his Jack Tripper, the one TV character who most influenced my behavior as a young man (yes, I do realize that makes me pathetic). The early episodes are hit or miss, as Chrissy’s tits were the show’s focus, but as Jack aged, so did his gift for physical comedy and overwrought mannerisms. High art it wasn’t — every single show was based on a simple misunderstanding that would have been avoided had the characters not been morons — but for some reason that eludes me to this day, I remember most of the shows in their entirety. I could rattle off lines, catch phrases, and even tell you the context of every Ralph Furley hyperventilation. 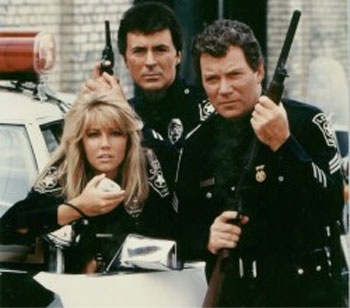 Fuck NYPD Blue, this was the greatest cop show of its time, if for no other reason than it introduced Heather Locklear to an unsuspecting world. And hell, what about Adrien Zmed, star of the 80s gem Zapped! William Shatner’s T.J. used his badge much as he used his phaser — overstated, and with a heavy dose of unrestrained madness. He screamed, huffed after “punks” and “scum,” and, in one classic episode, managed to die, only to be resurrected because, well, he’s William Shatner. As a college freshman, I taped every single episode during the day and watched it when I returned home. Needless to say, getting laid was out of the fucking question, and I had yet to obtain my first credit card that would allow me to secure the services of a professional. But I had another Hooker, and he never failed to leave me in awe. The dialogue, as expected, is cringe inducing, but I defy anyone not to have a good time. 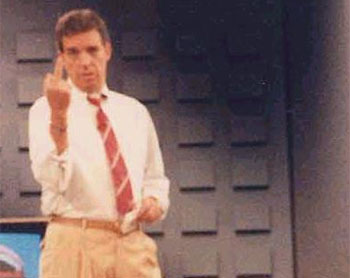 Did I understand what a “pablum puking liberal” was back in the mid-80s? Of course not, but it sounded cool as shit, especially when the chain-smoking Downey screamed it while inches from some poor sucker’s face. Downey was the original bad ass — mean, unfair, and loud as fuck, and I’ll be damned if I ever missed a program. I can’t remember the issues that were discussed, but I do believe I was fond of Downey’s way of handling them. Now I realize that he was a right-wing nutcase, but back in those innocent days, he just sounded pissed as a motherfucker, something every teenager can understand without thinking. And of course, there were Nazis, black separatists, whiny kooks, and every imaginable stereotype on display. And all that cigarette smoke. What a time indeed.

I was there every week (and in reruns), and I can’t for the life of me understand why. Bronson Pinchot’s Balki wasn’t funny at all, but I did love the wide-eyed antics of his cousin Larry, played by Mark Linn-Baker. I needn’t remind you that the stories were contrived nonsense, always involving Larry’s anal retentiveness and Balki’s naivete, and I will go on record saying that no show was less deserving of seven seasons. Once the twosome stopped being homoerotic and got married (to women way out of their league, adding to the impossible charm), the show died for me, but I’ll always have, well, not much. 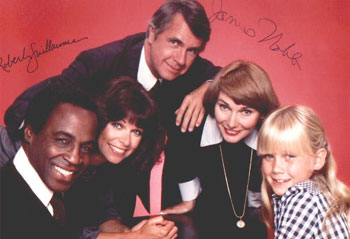 For this one, I’d go to the mat. Robert Guillaume’s Benson was the most powerful black man on TV; a politico who not only sassed white folks, but held authority over them. The dimwitted Governor Gatling was always (and clearly) a Reagan-esque figure; well-intentioned, but utterly clueless about the hows and whys of governing. And could the sparring between Benson and Robert Altman alum Rene Auberjonois (as Clayton) be topped anywhere else on television? Perhaps it was extremely simplistic concerning politics, but I fondly remember the nuclear war simulation episode, where the group got so carried away that they actually considered the costs of war. Heavy-handed? You bet. But twenty years later, I still remember that it was the only episode where Clayton’s character reverted to Rene’s real voice. 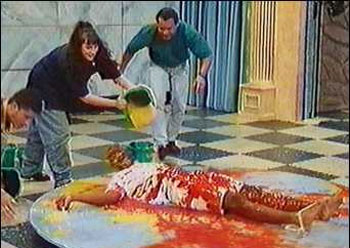 Back in the Greg Kinnear days of Talk Soup, I looked forward to the clips from The Richard Bey Show more than any other. Yes, Springer was fine, and even Jenny Jones got a little crazy from time to time, but no show was more of a deranged circus than old Bey. If memory serves, Bey looked like a used car salesman; a bit puffy, and not at all TV host material. But there they were — the midgets, the Klansmen, the midget Klansmen; the worst, most reprehensible freaks in all of American life. In all that time, I never did see an actual show (it was on way too late, and I was too dumb to set the VCR timer), but those clips kept me entertained for minutes at a time. 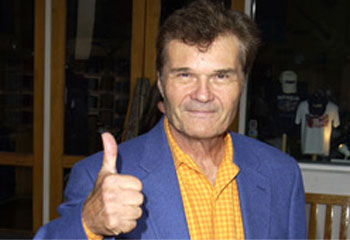 Fred Willard and a bunch of puppets? You’re goddamn right. This program both made me laugh and scared the shit out of me, as did the Genesis video featuring that stuffed Ronald Reagan. I remember the politics going over my head most of the time, but didn’t that Madame figure show up on occasion? You know, that old woman puppet who talked about sex and was always falling on some man’s lap? The show had all of the major political figures of the day, and it should date me to say that Ed Koch was the Mayor of New York at the time. Perhaps, in retrospect, it was somewhat defensible, but there seems to be something wrong with a grown man admitting he’s familiar with Madame. Trivia Note: Wayland Flowers, the voice and hands of Madame, died of AIDS and was buried with his beloved puppet. Additional Trivia Note: Now that makes both of us gay. 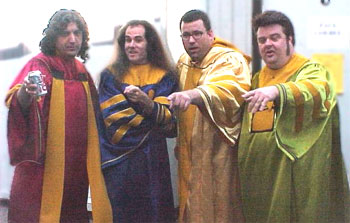 Alas, the Comedy Central fixture is no more, but it was one of the few game shows that reveled in making ordinary people look as stupid as we knew them to be. And the “geeks” were just so damn endearing — fat, long-haired, arrogant SOBs who laughed with pleasure whenever exposing the pop culture ignorance of the masses. When one particularly dippy chick mentioned that she hadn’t heard of a particular film, a geek shot back, “That doesn’t mean it doesn’t exist.” Beautiful. And the geeks even stuffed their faces between breaks, which for money is always a sign of someone who doesn’t give a shit what the beautiful people think. That, and there was always a geek who knew that Episode #34 was the one where Spock had the beard. 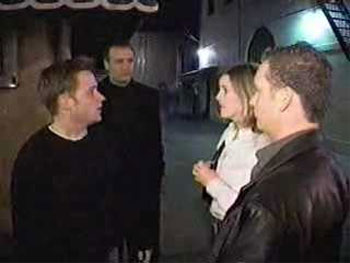 Voyeuristic garbage, but easily the most entertaining show on television. Host Joey Greco is a martyr for our times; he’s been stabbed, threatened, pushed to the ground, and had a gun pulled on him. The action takes place in the mecca of morality and decency, Dallas, Texas, and to a person, these cheaters are the epitome of vile, low-down trash. Not that I’d judge them, mind you. On an episode that solidified the program as sheer genius, an old black man genuinely tried to convince his wife that the naked young thing sneaking out of their bedroom was just some random woman who had to use the bathroom. I’ve seen people protest their innocence while tied to a bed; an elderly gentleman argue that the man on camera was his twin brother; and an unmarried couple with at least one child end their courtship in a McDonald’s. This is no doubt what McLuhan had in mind.

Another “reality” show that may or may not be legit, it has held genuine laughs by scaring the living shit out of people who would know better if they pulled their heads out of their asses. After all, only one in ten scenarios seem plausible (most involve the living dead, UFOs, and escaped lunatics), but we are dealing with white trash, the borderline illiterate, and teenagers here, so anything is possible. Whenever someone is fooled by an angry ex-employee or jilted lover, the fear is understandable. When some effete Mexican screams bloody murder about aliens and CIA cover-ups, I had trouble believing the results. But this is America, after all.