THE BOOK OF ILLUSIONS

THE BOOK OF ILLUSIONS 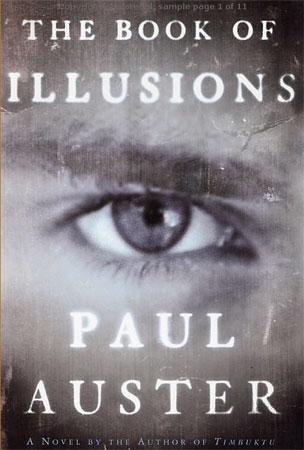 The new Auster took a while to come out, but it finally did and it was worth the wait.
The Book Of Illusions has all the themes dear to Auster, such as
anomie, anonymity, alienation (there I go sounding like Roth’s Vice
President What’s-his-name) and especially death. Death is present on
every page under all of its forms: murder, accidents, suicides,
attempted suicides, dead authors, sickness, etc.

It doesn’t sound like a happy go lucky kind of book, I know, but when has Auster ever written such a book?
The Book Of Illusions is about life and death, and about art.
Auster tells us that art makes its creator live-on long after he has
died. We have filmmakers, painters, and writers whose works live on. He
also tells us that art is a way of capturing the present and preserving
it. Thus, we have actors who will always look young and alive, even
though they are long dead. We have babies that are asleep on canvas,
even though they too died a long time ago. We have autobiographies
(both with morbid names: Memoirs From Beyond The Grave and My Last Sigh)
of dead people, etc.
But Auster also tells us that art helps you to go on with life. We have
a man who makes movies no one will ever see, just for the pleasure of
making them and we have a man writing a book about someone almost
nobody remembers; but those men are able to bare life thanks to their
art.

What is most impressive with Auster’s novel is that I often forgot that
I was reading a work of fiction. The description of the movies are so
vivid, you do believe that the narrator has actually seen those movies
and you believe that Herman Mann is a real director. The only part that
didn’t work for me is the speed at which the narrator and The
woman fell in love. It’s just too fast. I know she represents his
rebirth and all, but it was just too quick for me, and thus not
completely believable.

If you’ve read other books by Auster and liked them, you will like The Book Of Illusions.
If you never heard of Auster, then pick up his latest novel and read
it. It’s a quick read, it’s enjoyable, and only when you close it do
you realize how complex it really is. Yes, that means I’m recommending
it.