Home / Reviews / Music / THE ALMIGHTY PUNCHDRUNK MUSIC FOR THEM ASSES

THE ALMIGHTY PUNCHDRUNK MUSIC FOR THEM ASSES

Music For Them Asses 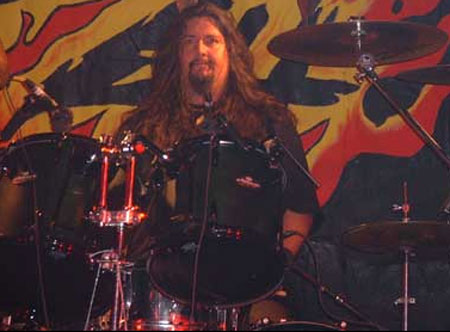 I like to think that I made an astute observation when I saw Strapping Young Lad (with Samael) late last year. I noticed that Gene Hoglan is fat. When I say fat, I mean more so than his band photos would lead you to believe. It’s a bit of a conundrum actually. On one hand, he’s an incredibly fast and technical drummer, one of the best around, and on the other hand, he’s fucking fat! This guy gets more arm and leg exercise than anybody else
in the band, but they’re not shuffling weight around on stage like he
is. How does this work?

Now that I think about it, Strapping is an
unquestionably ugly band, even repulsive. I would argue that they are
the most ugly [Ed Note: Or as we sometimes say, ugliest] death metal
band since Utopia Banished-era Napalm Death. The bassist resembles a younger and fuller Captain Lou Albano
and Devin Townsend has got to be the most ridiculous looking vocalist
in metal. First of all, the guy looks like he’s fuckin sixty, which he
probably is–just like one of those old metal-goons from the eighties
that held on to his faded, jean jacket and long hair even though he
went bald twenty years ago. I would bet that he wore fringe on his
jacket sleeves at some point. I can totally see him sporting a Bark at
the Moon T-shirt with tapered black jeans as a kid. At any rate,
somebody has got to tell him to stop. All he did during the show was
flip the crowd off and scream, “Suck a fat one!” in between songs.

But back to Gene. It was pretty amazing to see him drum. His speed and
unyielding double-bass appear to come effortlessly in the face of his
girth. He even twirls his drumsticks before commencing blast beats. Now
that’s metal! But being fat doesn’t come without its drawbacks.
He lost several sticks, presumably due to his relentless sweating,
which was no doubt due to his obesity. He needs to stop being a
free-lance drummer and find himself a band, and the band that he needs
to do another album like his The Almighty Punchdrunk. Music For Them Asses rocks. It’s grindy, it’s punky, it’s groovy, and the drumming, of course, shreds.