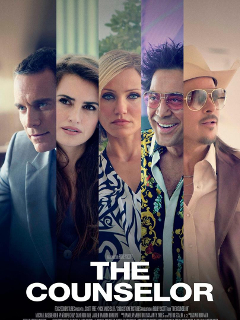 “You have the most luscious pussy in all of Christendom.” It’s official. Five minutes into this movie, the demigod Michael Fassbender declares that Penelope Cruz’s vagina reigns supreme. Granted, he restricts its rule to the Christian world, so there may yet be more luscious pussies out there, but it’s still a bold claim. Who says movies aren’t educational?

Anyway, I have no idea what happened after that.

The Counselor is the latest from Ridley Scott. Now, I don’t know if he’s depressed over his brother Tony committing suicide, but this is one depressing god damn movie. I mean, I’m depressed too; we’re never going to get a Man on Fire prequel now. But this whole movie just made me sad. To see the man who shares the name of Samus Aran’s nemesis reduced to this is just hard to watch. It’s not a disaster or anything, but it doesn’t seem to have much of a point. Mexican drug cartels are fucked up. Who knew?

Michael Fassbender plays The Counselor. He’s an attorney who sees one client during the entire 135 minutes of this film. The rest of the time is spent sleeping with Penelope Cruz, arranging some involvement in narcotics trafficking with Javier Bardem, having Brad Pitt tell him that he’s an idiot, and finally trying to not get killed by the drug cartels. At one point, Javier Bardem notes that every time you do a line of cocaine, you are implicitly endorsing the rape, murder, and mayhem perpetrated by the cartels. I’ve never done illegal drugs, so I’m in the clear. But are we seriously still arguing that this is a demand side problem? I haven’t heard anything about Jack Daniels slicing people’s heads off and cramming their bodies into drums. No, it must be the fault of the buyers. Decapitations happen whenever someone purchases cocaine. It’s a law of the universe that can easily stand with those of Newton and Kepler. Down to the nanosecond, whenever someone completes a transaction involving cocaine, somewhere else in the world, a head is sawed off. You can’t argue with that. It’s science.

By the way, I still don’t know what The Counselor’s involvement with the illegal deal was, exactly. Now, I’m all for movies that are made for adults and don’t spell out every little detail, but I’m at a loss to piece together what he did. When this act is the centerpiece of everything else that transpires, it’s somewhat problematic. I know, I should try paying attention, but it’s been an hour and a half since I finished this movie and I’m still confused. I understand most of everything else that happened, but I don’t get what The Counselor’s initial contribution was supposed to be. Does he know space aliens that can beam the cocaine across the border? What the hell is going on with this movie, Ridley?

Whatever. I’m going to go buy some Thai food. Maybe then things will make sense.

Fuck, they were closed. I forgot it was Sunday and they don’t open until 4. I had to get Kung Pao Chicken instead. This doesn’t look good, guys.

Oh, sweet Jesus. So anyway, when I was watching this movie, there was a part towards the end where Michael Fassbender is trying to beg for mercy from the head of the cartel. The cartel boss starts getting philosophical about choice, and fate, and life, and death (as people who are reading off of a movie script are wont to do). My point is that it took me until about halfway through the scene until I realized that he was the boss of the cartel. Then I remembered a scene some minutes prior, where Michael Fassbender talked to some other guy who hadn’t been seen in the film up to that point, and realized that the favor he was calling in was for the opportunity to talk to the cartel. This must be how people who never read Dune feel when Virginia Madsen pops up at the beginning. Is this movie actually happening, or am I just imagining it? What is this? Or perhaps, “What is a man? A miserable little pile of secrets!”

That wasn’t yet another pointless video game reference, by the way. It was, in fact, the entire point of The Counselor. There it is, folks. People suck, the world sucks, everything sucks. Michael Fassbender never whips it out. Fuck it all.

You’re fucked and there’s nothing you can do about it. You’re going to die, and not only are you not in the jungle, you’re not even going to receive the customary greeting. Your days, hours, and even minutes are numbered. The noose just keeps tightening on your neck, a fully electronic Colombian Necktie with no off switch. As John Leguizamo explains at one point, “Welcome to America.” By the way, John Leguizamo was in this movie for like two minutes. Once again: what the hell is going on with this movie, Ridley?

I don’t want to sound like I’m completely hating this film, though. Takeshi Miike once said something along the lines of that if a movie has one good scene, it was worth making. The Counselor certainly has more than one good scene, and in contrast to some of the garbage I’ve watched and reviewed for this website, I didn’t have to pause the movie every 15-20 minutes to play Sudoku and calm myself down. No, I watched it straight through with no problems. It’s got some hilarious scenes, like Javier Bardem’s description of Cameron Diaz’s antics on the windshield of a Ferrari. It’s got an absolutely gruesome death scene towards the end that I can honestly say I’ve never seen before. Interspersed with all of this is a variety of well-acted scenes and great little character moments that are all quite interesting by themselves. This is definitely a film that is more about the story being driven by the interactions between the characters than by any sort of conventional narrative. But yeah, this leads to the ultimate fact that nothing really happens in this movie, and all these moments often remain isolated from one another, never quite coalescing into a truly great whole.

Holy shit, that last paragraph got a little too intellectual. I’m so sorry. I don’t want to insult Cormac McCarthy by attempting to analyze his screenplay with my ill-equipped mind. Did I mention that Javier Bardem owns a pair of bitchin’ cheetahs in this movie? They were easily my favorite characters. The fact that they never deliver a Cheetah scene like the Iguana scene from Bad Lieutenant: Port of Call New Orleans is perhaps the biggest missed opportunity in this film. I hope they found nice homes at the end. We never quite get closure with their storyline.

This review is all over the place, isn’t it? Well, in my defense, this movie is all over the place. I’m still trying to figure out the early scene where Michael Fassbender converses with a diamond seller while picking out the rock for his engagement ring. The shopkeeper starts talking about how “every country that has driven out the Jews has suffered the same fate.” Now, the whole scene is about how diamonds are graded on their imperfections, and is full of metaphors for the story to follow. But what is going on, here? Why are we talking about “Semitic culture”? I’m sure there are some nuanced reasons for including this whole bit, but I’m honestly at a loss. I’m out of my element.

Well, I guess there is a point later on when Brad Pitt’s character explains why Jesus wasn’t born in Mexico: “They couldn’t find three wise men and a virgin.” So, is this movie arguing that Mexico needs more Jewish people? Is that why the diamond seller is talking shit about Spain? Is Mexico tainted by its historical association or something? I don’t know. I’ll never know. It’s beyond me.

Can’t think straight. Need Thai food. Brad Pitt notes that he could be happy living in a monastery, scrubbing the steps and cleaning the pots. The reason he doesn’t? “Women.” Then, at the end of the movie, he is undone by an attractive woman and his inability to not sleep with her. Wow. So deep. Much layers. A former client tells Penelope Cruz that Michael Fassbender has thin skin and will throw anyone else under the bus rather than face the consequences of his behavior. Then it happens, sort of, but not really. Michael Fassbender also turns down a blowjob from Rosie Perez. He’s just fucking up left and right in this one.

It’s all fucked, though. We’re all going to die. The Mexican drug cartels are going to kill us all, not because of any sort of simmering anger or hatred, but because it’s just business. And it’s all our fault. There’s nothing we can do about it. Why even think about decriminalization or legalization of certain drugs? It’s all over, the country is over, so just fuck it all. Truly, this is the most uplifting and life-affirming movie released last year. The world is shit and so is everyone who lives in it. If only people would stop purchasing drugs, the drug cartels would just evaporate. But they won’t, so we’re all going to die. Anyone want a bloody mary?

Now, I understand some of the argument here. For instance, potheads are quite irritating at times. I still remember December 2012, when they were getting quite excited about the whole Mayan Apocalypse thing, and one gentleman at the house I was renting a room at did a long bong rip in the family room and proceeded to talk about the upcoming “Polar Shift”, which apparently involved the Earth’s North and South magnetic poles flipping polarity, causing Southern California and the American South to swap weather through means unexplained. As mind-numbingly retarded as it was, do we really need to criminalize such things? I suppose he “had a prescription”, but whatever. There are a lot of idiots out there, drugs or no drugs. Some of them even run for Congress!

But keep up the good work, guys. I’m glad to see my tax dollars (Ed: Hahahahaha) going to stop the nefarious substance that today’s college students smoke before watching The Boondock Saints. We’re making the world a safer place, one naturally growing plant at a time. Fuck nature, am I right? Now let’s start another war in the Middle East. Afghanistan is just boring at this point.

Oh, did I mention that there’s a moment in this movie where they talk about how “the Arabs” are 9 times nastier than the Mexicans? It’s true; they say that if you put 9 Mexicans and 1 Arab in a room and give each $100, the gentleman who happens to be of Arabic descent will have $1,000 in the end. Man, I could write another 1,000 words on that…