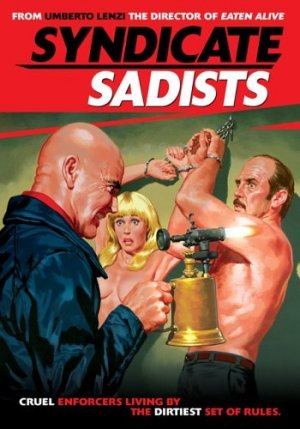 RAMBO is a biker on a visit to an old friend, who… wait, are you kidding me? The guy’s name is RAMBO! Am I writing it in caps for nothing? All right, the plot is another variation on the Red harvest / Yojimbo / A fistful of dollars setup of two warring gangs on a small town with an outsider playing them against each other. Except this time there’s an ass-kicking biker with a funny name thrown in.

Joseph Cotten plays the head of one of the warring gangs, and though his pained expression is consistent with his character’s poor health and the badly kept secret of his faltering eyesight, I prefer to think of it as a result of Cotten reflecting on the former glory of his Mercury Theater days and the mercenary crap he had to put up with in his last years.

RAMBO is a biker. RAMBO is Italian. Therefore, RAMBO is an Italian biker. A ramboling, rambounctious Italian biker called RAMBO! And he’s played by Tomás Milián, for fuck’s sake, so there’s no need to further elaborate on whether you could smell him from three blocks away or if he enjoys ad-libbing vulgar, streetwise dithyrambos:

Beyond that, I should note that some of his hat choices were puzzling, to say the least:

Greeting him after several years without seeing each other, the very first thing RAMBO’s old friend does is to hit him for a cigar. Surely it was a cheap cigar, but why can’t this bastard buy his own? And why does Cotten’s effeminate son keep raping his own nostrils with some king-size nasal spray?

Sadly, Syndicate sadists doesn’t live up to its American title or the wholly made up DVD cover. A courier is smothered with the contents of a bag of cocaine, but the execution is too fast to be truly painful or to grant the guy a two-seconds godly high. Some thug bashes the head of RAMBO’s friend against a rock, and later RAMBO avenges his death in the same manner. More childish than cruel was RAMBO taking a gangster and a prostitute to the bathroom and handcuffing them to a pipe. He pisses in the toilet in front of them, declares the couple husband and wife while making the sign of the cross with his six-shooter, and then drops the key to the cuffs on the toilet bowl, without flushing. The whole point of the scene was having one the gangster’s goons retrieving the key by sticking his entire forearm into the bowl.

RAMBO shacks up with an old flame, and it is inevitable that at one point the bad guys storm her house demanding to know his whereabouts, rip her dress open and eventually deliver a neck-snapping kick that cuts the interrogation short. Tellingly, RAMBO doesn’t seem too affected by the sad news, reminding us of the old truism that Achilles Mode can only be activated by the demise of a male acquaintance. Is this why Angela Merkel allegedly hates Italy and Greece and… Spain so much? All right, we deserve it.

The police and a private security firm are unable to rescue the kidnapped son of some rich couple, so the job must be done by one scruffy biker. No wonder he swept their subsidized asses in a previous karate demonstration.

A B-movie in every sense: not too good, not too bad, not too crazy. Still better than Last man standing, though. Again, Milián is a joy to watch in a film far beneath his abilities, switching between a relaxed facade and glimpses of manic intensity with the kind of effortlessness that takes years of hard work to develop. There are some passable shootouts, some lame motorcycle stunts, and the tired cliché of introducing a bulletproof vest so that later on someone wearing one is left for dead (no rocket launcher this time), but at least Lenzi keeps the thing moving along until reaching the forgettable conclusion.

The story goes that Milián had picked up a paperback copy of David Morrell’s First blood in a Miami airport, and liked the novel so much that upon landing in Italy he tried to convince some producers to make a movie out of it. They declined (dumb producers!), but at least Milián got to keep the name of the main character for his next poliziotteschi. Can you imagine how would be the world today had the Italians appropriated one of America’s leading icons with a cheap macaroni combat movie? Maybe Stallone would have resumed his porn career, maybe the US would now have the first transethnic brony prez, maybe real football would be known as football rather than soccer who knows? We’ll never know, but the magic of RAMBO was already there. Ram-bo: the tongue stuttering machine-gun-like before the exploding -m- subsides in a teasing whisper… Milián knew, and Lenzi, who tried unsuccessfully to get the name in the title, doubtlessly knew it too, as there are some bizarre attempts to turn RAMBO into some larger-than-life hero who’s really admired by the kids. Bizarre because these movies weren’t marketed for children, and an adult would find creepy all the instances of barely pubescent boys in short pants looking up with glowing smiles to a bearded biker, his name notwithstanding. Ah, the crazy, diddling 70s…

A score by Franco Micalizzi that would be quite conventional, were it not for the use of some electronic-sounding thingy every few notes. They possibly thought it was futuristic back in the day.