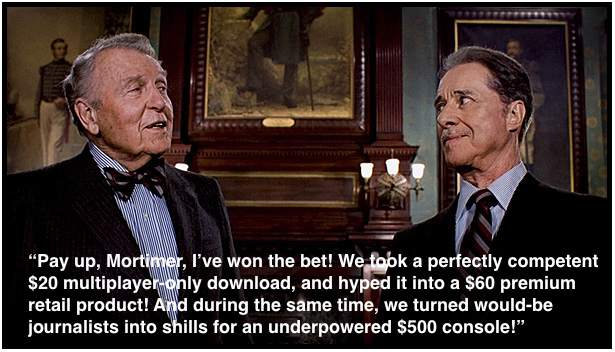 Titanfall is a fun $20-30 multiplayer shooter that, through the timeless process of game journalists getting overly cozy with the makers of the products they cover, has been given a $60 price tag and built up as the next milestone title in the history of video games.

Its important you understand Titanfall was preordained a winner by the niche press before it was even announced. This is how things work in game journalism. Even in this review, which (spoiler alert) is going to skew positive, I can only talk about Titanfall as being less than sacrosanct because nobody at Ruthless is in the bought-and-paid-for clique of 300-400 friends making up the full-time game journalism set. This means were not getting invited to E3 parties, were not getting swag bags with collector editions better than the ones they charge gamers an arm and a leg for, andthis is key nowwere not dependent on choreographed world reveals and other assorted puff pieces to drive clicks. Mind you, Im not claiming to be infallible: If Microsoft wants to give me the same $750,000 cash infusion it gave Polygon to make a feature-length commercial about itself, Ill be glad to do as theyve done and inhale Titanfalls rod until it spurts a Nuclear Ejection in my mouth. As it is, no funds have been transferred. Lets continue.

Titanfall is a multiplayer-only affair. It claims to have a campaign, but this mode amounts to nothing more than nine standard multiplayer matches played in order while audio logs play over the sound effects. (In a truly dick move, you have to slog through it twice to gain access to all Titans.) The game comes with the usual assortment of shooter game types: a pair of team deathmatch variants, capture the flag, team king of the hill, and last man standing (everyone starts in a Titan with a single life). In all modes, Titanfall is a game of 6v6. Each player gets access to a surprisingly meager assortment of genre-typical guns. The shooting is solid, but youve done this before, so what makes Titanfall stand outand Ill start by focusing on the positives hereis the giant mech-like Titans that serve as this games version of killstreaks (ie: rewards for playing well). Except in this case, everybody gets a killstreak, every single match, even if they suck at the game. In Titanfall, each player has a countdown timer begin at the start of every match. It defaults to three minutes, but you can shorten the wait by killing stuff. When the clock hits zero, you can either enter your Titan or let it act as an AI-controlled teammate for a minute or so until it invariably gets shot to shit. Titans are kind of gimmickythey play very much like clunky versions of human playersbut theyre still giant goddamn robots as special abilities, so they get an overall thumbs-up from me.

The other thing that makes Titanfall stand outthe thing that impresses way more than the overhyped giant robotsis the movement system. Put bluntly, the way players move on foot in Titanfall makes all other modern shooters feel slow. Double jump ability comes standard, and players can run on/jump off almost every surface to move swiftly and nimbly through the maps. Whatever other flaws the game has (it has many), Titanfall does a near-flawless job of combining the first-person parkour of Mirrors Edge with the speed of old-school arena shooters. It is, believe it or not, the games biggest selling point. The mechanic isnt worth a $500 investment on its own, but if you have an Xbox 360 or a decent PC, its at least worth experiencing when a sale rolls around.

Now, lets discuss the problems with Titanfall. First, the weapons: They get the job done, and the sound effects are quality, but the guns themselves are few and boring. I get why Call of Duty and Battlefield need an arsenal grounded in reality, but when your game has giant robots and a sci-fi motif, you drop the ball hard by failing to include a few laser guns, shock rifles, and goo cannons in the loadout options.

Next, its painfully obvious that Titanfall is aimed at a casual audience, to the point where the entire thing might be completely underwhelming if not for the insanely great movement system. 6v6 is a very low number of players, so matches are padded with tons of AI grunts running around the map to give the illusion of a large-scale ground war. Trouble is, this setup completely breaks the player-vs-player aspect of this 100% multiplayer game, especially in Attrition, Titanfalls version of team deathmatch (i.e., the overwhelmingly most popular game type in almost any shooter). Players get five points for blowing up a Titan, four points for a player kill, and one point for an AI grunt. In a game where you have a max of six human opponents at any time, it is entirely probable to dominate just by slaughtering dozens of mindless computer controlled bots. As a result, actual skill is worth very little in Titanfall.

This is confirmed (at least anecdotally) by the close spreads I saw in most of my matches: Players of very high skill will obviously do better, but a typical game of Titanfall ends with the vast majority of playersand often all of themtopping out at single digit player kills. The lions share of points, by design, comes from taking down cannon fodder bots. Things skew even more in this direction with the inclusion of the Smart Pistol, a gun that will actually auto-target AI bots on screen and shoot them in the head with a single button press. And though it does initially take longer to auto-target human players, even this can be significantly reduced with a later attachment upgrade. Yes, kids, theyve finally brought ultra-casual iOS game mode to $60 multiplayer. All this adds up to a game that goes out of its way to be friendly to those who suck at shooters, often at the expense of those who do not.

Maybe you think this is okay. If you cant pull off a headshot to save your life, or if you cant be bothered to actually become good at the games you play (e.g., most game journalists) you might welcome this sort of thing. Indeed, most reviewers speak of this fun for all philosophy as something to be applauded. If the scoring system were differentif the point limit were doubled, Titans were 15 points, players were 10, and bots were oneperhaps I could concede. As it is, Titanfalls scoring structure goes beyond simple inclusion of less skilled players; it panders to them. Even the inclusion of a Pilot Killer variation of team deathmatch where grunts dont count toward the score doesnt remedy this problem: In a game full of maps designed from the ground up for 6v6 plus bots, just yanking bots out of the equation results in wide open spaces which contain nothing worth shooting.

Lastly, this game does not look like a flagship title for a $500 next-gen system. At all. Perhaps your experience might differ on a juiced PC, but I played Titanfall on the Xbox One for this review, and I can tell you that it looks like a moderately sharper version of a 360 game. Thats because it is a moderately sharper version of a 360 game. By this, I mean that it is releasing on the Xbox 360 in about two weeks. For its part, Microsoft has done a great job of pretending the 360 version doesnt exist: Ads do not mention it, there has been a complete press blackout on screenshots and videos of the 360 version, and the port was actually pushed back two weeks in hopes that Xbox 360 owners would run out and buy $500 systems because they couldnt wait ~14 days to play it on the machine they already own.

This is very weird. Usually, a systems killer app is exclusive to that system. If you wanted to play Mario 64, you got a Nintendo 64; there was no SNES version to be had. If you wanted Halo, you bought an original Xbox, though a PC port did follow almost two years later. To contrast: Titanfalls PC port launched day-and-date with the Xbox One game, and the 360 port launches soon. This, despite the fact that from the day Xbox One was revealed, Microsoft has desperately positioned this multiplayer-only shooter, developed and published by companies it doesnt even own, as its next-gen Halo equivalent. EA/Respawn might have insisted on a multiplatform release as a failsafe in case the Xbox One sold Wii U numbers, but it remains painfully obvious that Microsoft wants gamers to view Titanfall as the reason to plunk down $500 for a new system.

To that end, Microsoft is now offering a free digital copy of the game as part of a Titanfall bundle. It still costs $500 like a normal Xbox One, which means you got fucked if you previously bought a system at launch (or last month) in anticipation of Titanfall. For new buyers, though, Titanfall is a pack-in, a sort of free-to-play game. Thats a decent value. Titanfall at a free, $20, or even $30 price point is worth it, because it brings speed and fluid movement back to mainstream shooters in a huge way. (If the game does well enough to supplant Call of Duty, hopefully it is the movement mechanics that will be cloned endlessly by publishers throughout the coming generation of games, not just the inclusion of big robots.) But at $60, or if you werent already sold on an Xbox One? I suppose thats subjective, though Id seriously think it through first: Id wager youll be able to get this thing cheap on the 360 pretty soon.

In closing, Titanfall doesnt play the part of system savior very well. Were dealing with a casual-focused game that lacks any single-player campaign and is limited to 6v6 in a world where even the well-fucked corpse of Call of Duty can do 9v9. Throw in relatively flat production values and a meager assortment of unlockable weapons/attachments, and youre left with a game elevated way above its paygrade by a hype machine incestuous with the press covering it. The important caveat to this is if you already like multiplayer-only shooters and go into Titanfall with more grounded expectations, theres a good chance its solid shooting and legitimately fantastic best-in-genre movement system is going to hold your attention for a dozen or two hours. In short, Respawn Entertainments first effort is a fun little game you probably should play, but take care to not believe the hype.