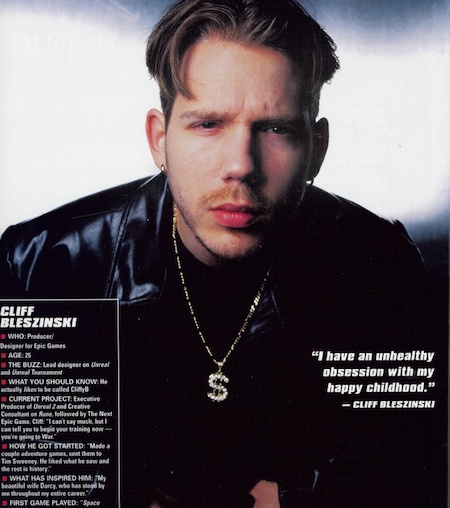 Cliff (whose douchebag handsomeness Ive obscured with an ancient photo, because this is a hitpiece) was instrumental to the development of both Unreal and Gears of War, and was also involved in bringing the criminally overlooked Bulletstorm to market. Thats a hell of a resume, but after turning Gears of War 3 into a lobotomized, microtransaction-focused shell of previous titles, Cliff cashed out of developer Epic Games, along with most of its top tier staff. As a result, Tencent, a Chinese conglomerate focused on MMOs and social web games, now effectively controls Epic and its legendary IP. Looking at recent statements from the company, it doesnt take much reading between the lines to conclude Epics time creating world-class adventures is over.

Though this shift is awful for gamers, no rational person can blame a guy for taking a payday. Yet, Cliff isnt content to spend the rest of his days banging his grrl gamer trophy wife on a money pile with the dignity of an elder statesman: Hes now a prolific Twitter troll and maintains a Tumblr for rants. Things Cliff has come out of retirement to defend on social media include Anita Sarkeesian, Xbox Ones initial DRM scheme and killing the used games market, and Oculus Rifts sale to Facebook (in which he stands to make yet another pile of money as an early investor).

It should also be noted that Tyler Bleszinski, Cliffs brother, is founder of Vox Media, which is the parent company of the most insufferable den of hipster game journalists on the web. Both of the Bleszinskis are self-professed Microsoft fanboys, andwouldnt you know itPolygon makes it a habit to dump on Sony exclusives, while grading Xbox stuff on a curve. The evidence is clear: When it comes to anything unrelated to the actual production of shoot-the-man video games, the name Bleszinski is synonymous with fetid shit. 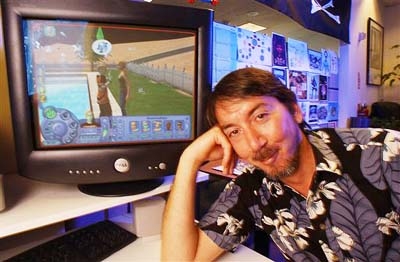 What do you do after you make two of the most successful game franchises of all time? If youre Simcity/Sims creator Will Wright, you leave the company you founded to start an entertainment think tank whose output to date includes a one season sci-fi series on a now-defunct television network, and uh an ant farm toy.

Also, you donate close to 100k to Republican causes, because youre an asshole. 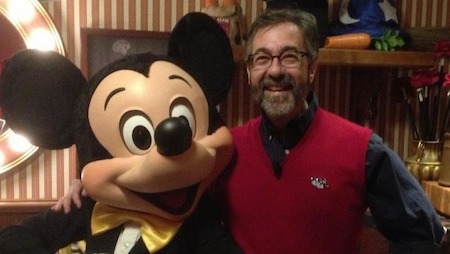 Of all the game developers on this list, this one is the most tragic. Warren gave us a little game called Deus Ex, which is on the shortlist for greatest game of all time. Deus Ex looks rough (it came out in 2000), but when paired with community-developed visual mods, it compares favorably with just about any game released in any year since.

As follow-ups, Warren made sequels to both Deus Ex and Thief. Each got a lukewarm reception, and developer Ion Storm shut down. Warren then reemerged with a grand vision for Epic Mickey, a gritty, steampunk-inspired alternate version of Disney lore where Mickey Mouse is the villain. After signing Spector to a development deal, Disney proceeded to focus test the project right into irrelevance by stripping it of everything that made it unique in the first place. The result? A pair of uninspired platformers with flat sales. Again, Spector found himself with a shut down studio.

Youd think such an experience would send Warren Spector back to his roots. Instead, he became gamings own cantankerous, senile grandpa, sitting on the virtual lawn while shaking his cane at all the young whippersnappers and their violent, oversexed games. Yes, the man who gave us one of the greatest first-person shooters of all time now sees fit to publically rail against shooters.

Even worse, he rails against the very sort of open creative spirit that allowed a game like Deus Ex to be made in the first place: Here, Warren Spector flat out says that some games (he uses Lollipop Chainsaw as an example) just shouldnt have been made because of their content. Warren Spector cant handle cheerleader tits in his old age, so we all must suffer for it.

Theres always going to be a space in history for Warren Spector because of Deus Ex, but the man hasnt been relevant in any real way for over a decade. Hes the last person who should be guiding a new generation of developers. Thankfully, we have Warrens Deus Ex collaborator Harvey Smith (Dishonored) to carry the torch into next-gen. 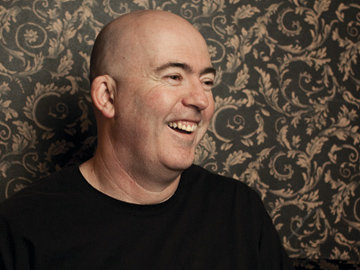 Lots of hipsters in the games press love to argue whether or not gaming has its Citizen Kane, or its Roger Ebert, or (insert poorly thought out comparison to film here). Those conversations are as useless as they are pretentious, but one thing is certain: Gaming does have its Troy Duffy. Enter Brendan McNamara.

McNamara first came to prominence with The Getaway, a Playstation 2 exclusive crime shooter that was notable for its painstakingly accurate rendition of London. The game wasnt perfect by any means, but in his attempt to deliver a sort of playable Guy Ritchie film, McNamara was surprisingly successful in using cinematic techniques to make games more intuitive. To illustrate, there were no health or ammo gauges: Players had to grab new guns when their current one went dry, and bloodstains on the protagonists suit jacket signaled when death was near. Likewise, the games driving sections utilized turn signals to show players when to change course, and intense music picked up when the player was in danger of losing a target. In 2003, this kind of thing was legitimately novel.

The Getaway was positioned as a hot new franchise, to the point where a Game Informer feature reported a film adaptation had been greenlit before the game even released. Those plans never came to fruition, as a poorly received sequel quickly killed the franchise (Sony shelved a planned third installment for PS3). McNamara, however, still had clout within Sony. After leaving to start his own development studio, Sony signed him to develop LA Noire, a detective game set in the era of film noir.

By 2006, Sony had tired of constant delays and McNamaras legendary temper to the point of setting their former exclusive free: LA Noires publishing rights were sold to Grand Theft Auto developer Rockstar Games, and the game became a multiplatform release. More delays followed until the game finally saw release in May 2011, seven years after the start of development. Despite being an extremely boring game, LA Noire was cinematic enough to do well with games press hipsters who desperately wished they were writing about film instead of games, and it sold well on the back of the Rockstar brand. (The games heads-up display, packaging, and other elements were made to resemble other, more action-packed titles in the companys roster, even though actually playing LA Noire was more like a 3D version of old-school point-and-click adventure games than anything else.)

Such success would have naturally led the acquisition-inclined Rockstar to make an attempt to formally buy McNamaras studio and its admittedly impressive face-capture tech. However, no such move happened: In a rare, surprising bit of actual journalism about video games, IGN describes how Rockstars working relationship with McNamara became so toxic that even the promise of more filthy lucre wasnt enough to continue dealing with the putz.

Like a great villain of serial fiction, McNamara appears to have gotten away with it again: His studio soon went bankrupt, but was sold to the film production house responsible for Happy Feet and Mad Max. McNamaras newest announced game, Whore of the Orient, is expected to release sometime before the heat death of the universe. 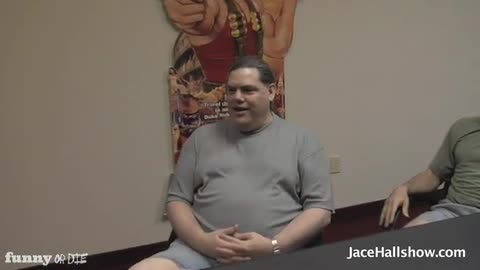 McNamara isnt the only developer who took forever to make a game: LA Noires seven year turnaround time looks downright speedy when compared to the exploits of one George Broussard (also pictured in the front page link), a man who took fifteen goddamn years to complete a single game  and even then, only after being forced into sudden death by an angry publisher ready to litigate.

Broussards biggest hit came with Duke Nukem 3D, an early first person shooter that was all about leading the titular, homoerotic bodybuilder/action star parody on a quest to kill aliens and save strippers. Despite the braying and neighing of an assortment of frauds in the indie scene and niche press, video games always have been/still are at their absolute best when they take the form of power fantasies, and in 1996, nobody did boobs and blood quite like George Broussard. The game sold millions of copies, back when selling millions of copies of a game got you financial independence instead of stock downgrades and lowered projections. 3D Realms also helped produce/publish runaway hit Max Payne, giving Broussard a blank check while he toiled on Duke 3Ds successor, Duke Nukem Forever.

The trouble with getting a dump truck of money is that once you have it, nobody wants to/can tell you no. And so it was that nobody said it to George Broussard. For years, George made a habit of regularly scrapping all progress on Duke Nukem Forever so that he could start anew with whatever emerging game tech was hot at the time. As a result, the development of Duke Nukem Forever remains the longest active development cycle in the history of the medium. This site helpfully recaps a laundry list of things that happened while Duke Nukem Forever was in development  most tellingly, when the game was first announced, reality television hadnt been invented, and nobody had heard of Britney Spears.

This storys ending is bittersweet: With no more cash left to burn, Broussard was forced to sell Duke the game and Duke the IP to Gearbox Software. Duke Nukem Forever was finally released by Gearbox in Summer 2011. It was actively ripped apart by a hostile niche press that spent more ink deriding the game as offensive and sexist than actually pointing out its more relevant flaws, including the slowest loading times in a modern game and one of the most tedious water levels of all time.

In the end, a product that very well might have been a standout in the early/middle part of last decade was received as complete trash in 2011. As such, George Broussards is the perfect cautionary tale to illustrate what can happen when perfect becomes the enemy of good.