This Summer, if you don’t recognize the existence of God, you’re going to be meeting him sooner than you think! Open Carry Pictures presents a film so terrifying, you’re going to want to bring two pairs of your elastic waistband jeans into the theater!

Move over Kirk Cameron, a new sheriff is in town. Actually, there are two new sheriffs: Marine Todd and Colton Burpo. That’s right, the atheist-professor puncher and the harbinger of heaven team up to exterminate godless liberal scum from the earth, and you’re going to want to be there to watch. 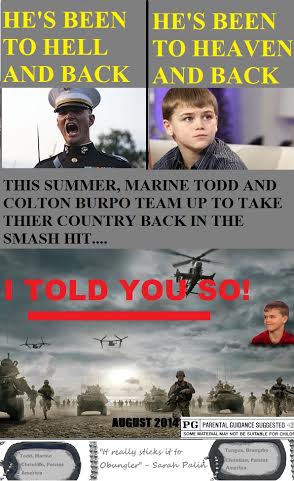 This August, I TOLD YOU SO! opens in select theaters throughout the South and Midwest. The preview will be in Denham Springs, Louisiana and projected onto the side of the local Walmart for paying patriots only. We will be accepting cash, ammo or Bitcoins as currency to see the premiere (NO FOOD STAMPS ALLOWED). Marine Todd and Colton Burpo shall be in attendance and will be signing bibles and weapons.

Viewer discretion is NOT advised because we live in a free society where the nanny-state can’t tell us what to watch.