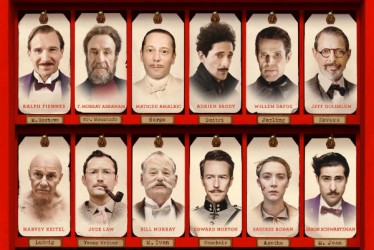 Hapsburg servant or Portland hipster? Can you tell which is which?

Fair Value of the Grand Budapest Hotel: $10.00. It’s a light trifle of a film, lacking the heft of other Wes Anderson films, but still a good pastiche of mid-century Central European comedy.

Come with Me to the Land of Chintz: When you think of it, it’s rather amazing that Wes Anderson has not made a film focused on Europe before.  Early 20th century central Europe (the central area of the former Austrian Empire) in particular, is a natural fit for Anderson: a land of useless nobles, baroque costumes, and obscure hobbies. It is from this area of the world that we get the wonderful Yiddish term luftmensch– meaning a coffeehouse intellectual, a person who achieves nothing for all their sophistication. That’s pretty much half of the cast of any Anderson film.

Zero Moustafa (F. Murray Abraham) is a mysterious ex-millionaire, living in the decaying resort of the Grand Budapest Hotel in the now-communist Republic of Zubrowka. He decides to relate his story to The Author (Jude Law), specifically of his youth in a more glorious Weimar area Budapest Hotel.

Then, the Grand Budapest Hotel was the ne plus ultra of alpine ski hotels, operated by chief concierge M. Gustave (Ralph Fiennes). Gustave is a metrosexual gigolo, entertaining and bedding the aging duchesses who stay at his establishment. When one such paramour (Tilda Swinton) bequeaths an Old Master painting to M. Gustave in her will, a younger Zero (Tony Revolori) becomes an accomplice to M. Gustave, as he is accused of murder and theft, and must act as Gustave’s agent to find the real murderers. 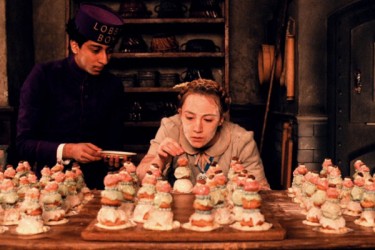 Complimentary insulin shots will be provided upon request after the screening of this film.

The Girl with the Mexico Birthmark: The plot is P.G. Wodehouse by way of Franz Kafka, focusing on the plotting of the servant class as they try to navigate through a capricious and treacherous society that changes governments every act. That being said, it relies heavily on running gags, set pieces, and general whimsicality. Wes Anderson has become his own satirist with this film. There’s no longer a line between making a Wes Anderson movie and making fun of a Wes Anderson film. Because of this, the film is less interesting, because we’ve come to expect that every character is going to be quirky. What would be surprising would be for a truly banal character to appear.

By making the upper classes secondary in the cast, the film-maker loses some of his touch. His characters in Grand Budapest Hotel lack for grounding. I get that it’s supposed to be magical realism, but the magical bits crowds out the realism.

That being said, the pace is energetic, and it’s another film of gorgeous and twee costumes and set designs. Anderson’s action cinematography is reminiscent of the work of Jean-Pierre Jeunet (Delicatessen, Amelie). However, comparing Anderson’s satire to Jeunet’s class satires is like comparing the playful gumming of a Corgi to the bite of a German Shepherd. If Wes Anderson is making fun of anybody, it is only of his own tropes and affectations. It takes an American film-maker to go this gently on both the Hapsburgs, the Nazis, and the communists. 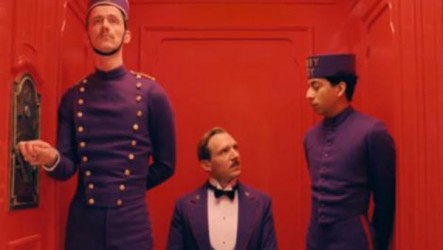 Wes Anderson’s L’Auberge Espagnole: Wes Anderson’s movie feels like tourism. It’s a movie for people who read The New Yorker in the waiting lounge of their psychiatrist’s office. Central Europe is a cosmopolitan place, but Anderson blows it up into this pan-European collision, where Arab bellhops court Scottish bakers. Most of all, Wes Anderson reduces everything to an accouterment. The runes of the SS, the death’s heads rings? Why those are just flourishes. It’s a genericized vision of Europe, and particularly the magical realism of Gunter Grass and Stefan Zweig.