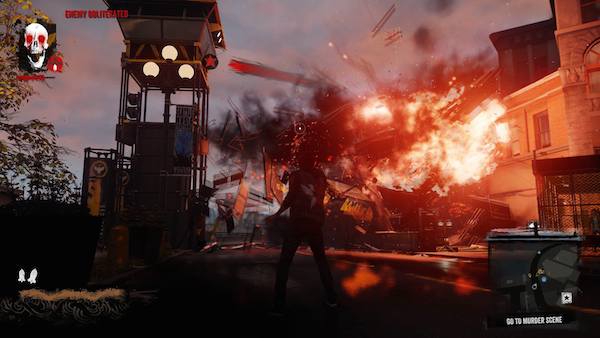 Spoiler Alert: Things blow up in this game.

Infamous: Second Son, the third in developer Sucker Punchs open-world superhero franchise, has the distinction of being one of the first games on either next-gen console to truly look the part. Sucker Punch is based in Seattle, and the in-game version of their hometown may or may not be better looking than the real thing. While not a 1:1 recreation, the game does include the Space Needle and lots of other, lesser landmarks that will be recognizable to people who live in the city. The visual and lighting effects during a trademark Seattle downpour, or when your character drains energy from a neon sign or smokestack to recharge, are things that absolutely couldnt have been done on last generation hardware. Most striking, however, is the insane amount of detail thats gone into the character faces. While not exactly photorealistic (were not going to get there this generation either, sorry), the faces are detailed enough to the point where, for perhaps the first time, game characters can somewhat convey subtle degrees of an emotion using body language. While this detail is more noticeable during cutscenes than during play, it is a welcome addition. 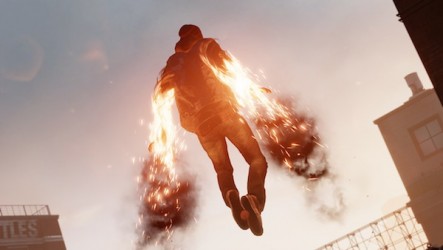 Delsin’s new power upgrade lets him shit from his hands.

And for the most part, those characters are pretty great. Main character Delsin isnt exactly likable, but the way he plays off of two other extremely likable charactershis sidekick/uptight brother and their sharp-tongued elderly friendbuys him a lot of goodwill and sympathy he hasnt really otherwise earned. The other minor characters border on insufferable, and Delsins obnoxious love interest veers dangerously close to DmC New Dante territory, but the game compensates with one of the most enjoyable antagonists in recent history. A superhero yarn is really only as fun as its villain, and Second Sons big bad is more than happy to chew the scenery from start to finish. 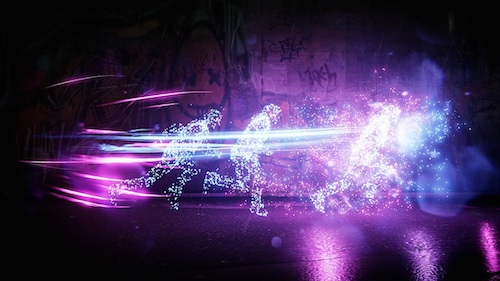 Sadly, the story itself is a giant leap back. The first two Infamous games did a pretty good job of building a new comic-style universe from scratch, to the point where it wouldnt have been unthinkable to incorrectly assume Infamous was a lesser-known DC or Marvel property before it was ever a game. But where the first two games were well-paced with a number of batshit insane twists and turns, Second Son has nothing of the sort. Unlike its predecessors, this is a standard exercise in game writing, where the plot exists only to give you the flimsiest excuse to murder a thousand dudes. As a result, youre left with a weird situation where Second Sons dialogue and acting are worlds better than anything seen in the first two games, but the tale itself limps along, a forced, unnecessary continuation of what was a complete two-part story with a natural conclusion. From a narrative standpoint, Second Son has no reason to exist at all. 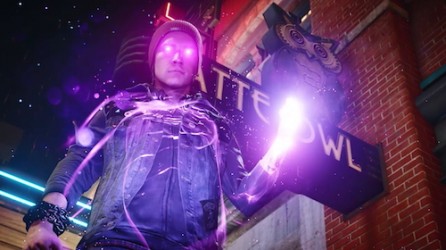 Many Seattle institutions can be found, but Starbucks isn’t one of them.

But hey, who the fuck plays these things for the story, right? Were not here for literature; were here to terrorize a major American city with superpowers! In this department, Infamous delivers. Yes, you can play as a beacon of justice and all that bullshit, aiming your shots precisely to avoid civilians and taking great care to subdue enemies instead of killing them, but Infamous is at its best when approaching it as a sort of superpowered version of Grand Theft Auto, firing large radius powers without care to take out whole city blocks of people and vehicles. Despite the narratives insinuation that youre supposed to be a hero, the game pretty much encourages you to be a murderous asshole, because buskers abound, and seriously, fuck buskers. There are also sign-twirlers for businesses, and if Sucker Punch added a DLC skin to let you blast the Liberty Tax mascots to hell, their stock price would probably end up rivaling Apples. In any case, after the smoke of battle has cleared, a few enemies and/or civilians will likely be left injured on the ground. At this point, you can heal/subdue them if youre some sort of pantywaist, or you can finish them off by punting them down the street with a satisfying thwack. Truly, Second Son reaffirms The Mighty Boot as one of gamings most satisfying mechanics. 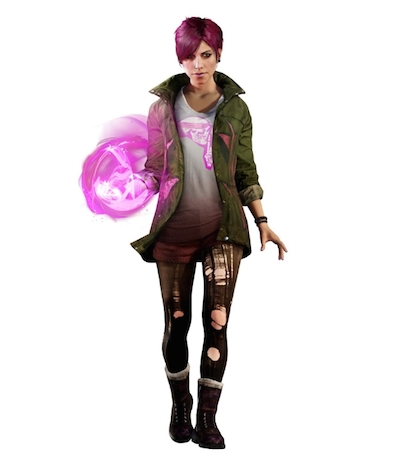 She’s cute… then she talks and calls you “smokes.”

Whenever a game is hyped as a major first-year exclusive for a new system, getting the game out usually takes precedent over the elimination of rough edges. As such, Second Son has more than a few of its own  namely, its length. The games main campaign can be beaten in maybe six hours, and it shouldnt take more than 12-15 if you do all the optional sidequests and collection tasks. Thankfully, this filler content is enjoyable, because most of it requires you to jet around the city, and doing so is an absolute blast thanks to the ever-increasing set of abilities. Theres some replay value in starting the game over to play the game as a good/bad guy depending on how you played the first time through, but you dont get to carry your powers over to a new load, and once youve beaten the game and maxed out your powers, theres really nothing left to do by way of endgame content.

Second Son looks great, but it is a short experience with an ultimately disposable addition to the Infamous story. Still, if you have a PS4, youre not exactly awash in top-shelf games just yet, so you could do a lot worse than going on a 12 hour superpowered rampage and kicking field goals using yuppies as footballs.