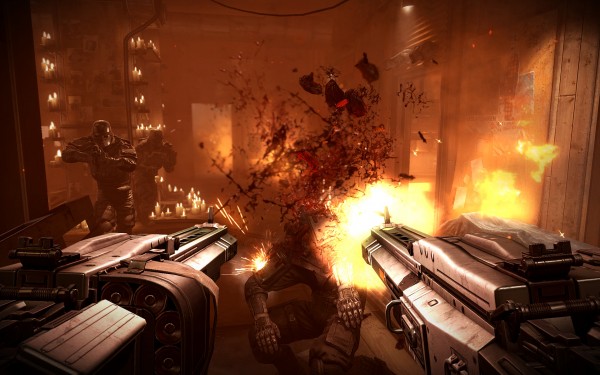 You’ll be doing a lot of this in Wolfenstein! Yay!

In Wolfenstien: The New Order, we have a strong frontrunner for Game of the Year, 2014. Here we find the very definition of lateral thinking by way of extreme violence: Its a game from an alternate timeline where developers and publishers eschewed the easy money of multiplayer-focused titles, and instead opted to develop vast single-player shooters with replay value, intense gore, and narratives that make the player feel like the ultimate badass. Rest assured: Everything about this game is awesome. Whats more, developer MachineGames embarrasses their contemporaries by making the whole thing seem so goddamn effortless.

Lets start with the premise: In Wolfenstein, you play as an American soldier named Captain B.J. Blazkowicz, a hulking, corn-fed monster of a dude who lives to kill Nazis. In the short spurts of downtime when B.J. isnt putting a bullet in a Nazi ass (or a knife in a Nazi head), hes speaking softly, directly, and in few words about his recurring dreams. The dreams of B.J. Blazkowicz are simple  theres a sexy housewife and a lush backyard. If game tech had evolved to a point where we could physically take B.J.s place in the tree hammock, wed probably be able to smell grilled meat and freshly mowed grass. Far from the simpletons found in many games of this type, B.J. has many sides: Sometimes, B.J. will stare a tender hole into the heart of his hot female sidekick while they bang on a Nazi train. Other times, hell carefully don a splatter-guard apron and goggles before interrogating a captive Nazi officer with a comically large chainsaw. As you can see, B.J. is a man of broad horizons, all of them fuckin awesome.

The hook here is that the Nazis won the war and conquered the world because of a botched mission by B.J. and crew in the 40s. Now its 1960, and B.J. has to put things right again through the liberal use of firearms. Wolfenstein has great firearms. Every bullet roars like thunder, every shot that connects causes Nazi scum to lose gallons of blood, limbs, and/or brain mass. The violence on display is breathtaking, a new standard of unapologetic viscera that makes the kill animations of other shooters look like a bunch of kids falling down to simulate being dead during a round of make-believe. 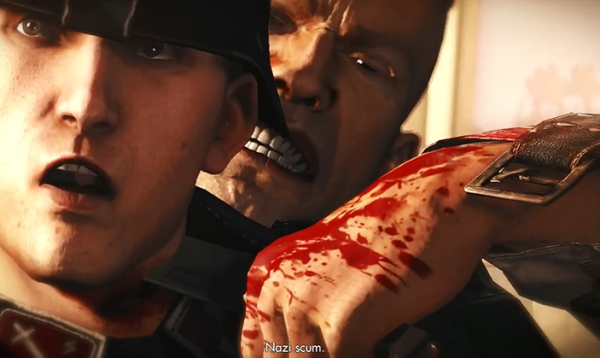 The weapon selection in Wolfenstein is limited, but it has been masterfully curated, and youll have access to all the guns you pick up  no two-gun limit bullshit here. Want to dual wield shotguns and then switch to dual wielding assault rifles with the press of a button? You can do that. Would you like to have one of those dual-wielded assault rifles be equipped with a rocket launcher that literally blows enemies to chunks? Wolfenstein is more than happy to accommodate your refined murder palette, friend. Youll also find a selection of portable chaingun turrets, grenades, a kickass laser cannon, sniper rifle (that later doubles as a laser sniper rifle), and twin pistols with optional silencer. Not one of these weapons are disposable trash, all are a joy to use.

But Wolfenstein isnt content to only embarrass every other FPS on the market, it wants the blood of the stealth genre, too. I know, I know: The idea of stealth in a Wolfenstein game sounds like high sacrilege, but rest assured that sneaking around in the dark to cut Nazi throats (or pop them with a silenced pistol) is every bit as thrilling as blowing them away. Stealth never gets bogged down in frustration  with a few tweaks and more upgrades, an entire game could be made from the stealth play alone. Again, other stealth titles should be taking detailed notes. Whats more, the game rewards your sneakiness by updating the map with locations of hidden items that can be used to unlock new modes, like infinite ammo. 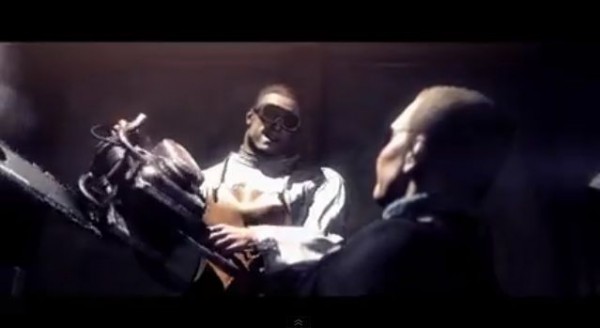 Spoiler alert: BJ puts down the saw and chats with the nice SS man over a cup of tea.

Wolfenstein doesnt have multiplayer. I can sort of see how this is a shame, because I would love to play a multiplayer game that has been crafted with this level of skill and polish. Ultimately, though, MachineGames deserves our gratitude for daring to focus on delivering a single-player mode for the ages in an era where most companies view such things as an afterthought. With a lengthy campaign, awesome writing and characters, tremendous replay value, and dynamic top-shelf bloodletting, Wolfenstein: The New Order is a rare delight. If youve ever wished shooters could be like they were in the old days, you need to buy this, right now, or youre a hypocritical asshole.(*)

(*) Being broke is no excuse, particularly if youre an American  theres a predatory payday lender or pawn shop on every street corner that would be happy to help you. You must have a moderately valuable family heirloom lying around, right? Get thee to a pawn shop and hock that piece of trash, bucko, because you wont be needing it: This game will be your new legacy, the thing you pass down through generations, and your descendants will be all the better off for it. In point of fact, Im pretty sure that if my own father had handed me a copy of Wolfenstein instead of trying to get six-year old me interested in stamp and coin collecting, I wouldnt be writing reviews of electronic playthings on the Internet, as Id be too busy entertaining a harem of supermodels from my golden palace in Scandinavia. Would you like your children to someday have a golden palace with a harem of flawless beauties (or hunks, whatever) at their disposal? I cant legally claim that buying Wolfenstein: The New Order will make this happen. All Im saying is that it cant hurt your chances.