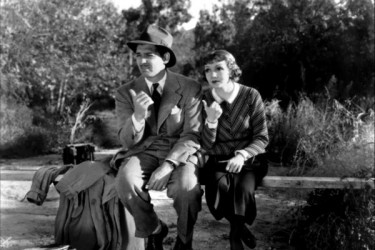 The Good Old Days, when homeless hitchhikers knew how to dress.

Fair Value of It Happened One Night: $18.00. It’s one of films that established the template of the romantic comedy, and that shows Clark Gable at the height of his game. Highly re-watchable.

The Flick that Launched A Thousand Screwballs: Frank Capra was already an established director of comedies at the time that he made this picaresque, which was to launch his classic run. It Happened One Night debuted at the nadir of the Great Depression, when unemployment was catastrophic and the dust bowl was in full effect. By this point, Capra had already developed a well-honed sense for what would and would not connect to audience. And did this film ever connect! It was the first movie to sweep the Oscars (Best Director, Picture, Actress, Actor, Screenplay), and Columbia’s biggest hit. The success of It Happened One Night enabled Capra to begin working as one of the auteurs during the studio era.

More importantly, it’s the best early cinematic representative of the screwball comedy- the same Petruchio-and-Katherina romance of opposites that made bank for Shakespeare. Though in this case, it’s more the taming of the debutante dormouse than the shrew, but the dramatic dynamic is the same. 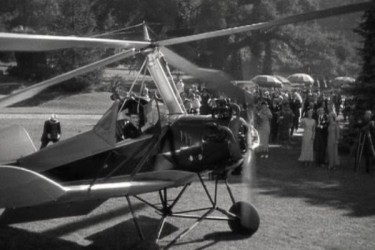 I still don’t understand why she doesn’t marry the guy who arrives via autogyro wearing a top hat and tails.

Nag the Rich: Wealthy heiress Ellie Andrews (Claudette Colbert) is as cloistered as Rapunzel, although her prison is a yacht, and her jailer is her William Hearst-like father (Walter Connolly). Ellie dives off the boat and sets out to elope with Prince Westley (Jameson Thomas), mostly on the basis of him being the only man she ever met that wasn’t a servant or employee of her father. Embarking on a bus, she is noticed by tabloid journalist Peter Warne. Recognizing her as the scoop that will regain his employment, Peter aims both to help her and to ensure that the story is as juicy as possible. Surprisingly, though, he does not ply her with whiskey- but that might because he is such an alcoholic as to hoard it to himself.

Frank Capra is using the comedy to needle the upper classes, but with far less venom than his later films. In this film, they are merely naive, unaccustomed to the troubles of the actual world. A great deal of the comedy is of the ‘how the other half lives’ variety. It’s a vicarious fantasy- no doubt, in 1934, there were a great many moviegoers who wished that they could show the aristocrats how the other half lived. Ellie is such a spoiled character that we enjoy the way that Peter tricks and humiliates her.

Capra’s genius lays in introducing a comparative naturalism to the pacing and setup of the comedy. The meanderings of the film seem like natural divergences on the course of a road trip by bus; and the conversations have the triviality of actual small talk. The result is a comedy that’s funny without seeming to try hard for the jokes. It’s an example of how, in the hands of talented actors, one achieves greater characterization through the small lines than from the dramatic lines. 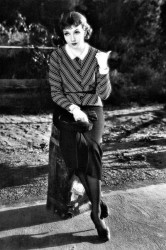 Depicted: The standard of raunchy comedy in 1934.

The Timelessness of the Pick Up Artist: Sitting down to watch this movie for the first time, I recognized something about Gable’s performance as Peter Warne- he was behaving according to standard strategies used by pick-up artists. In particular, Warne is continuously ‘negging’ Ellie. For those of you still pristine from the stygian bath that is Pick-up Artist culture, ‘negging’ refers to the practice of reducing a woman’s self-esteem through subtly deprecatory comments, in order to cause her to react to the insecurity by becoming attractive to the man. It’s one technique out of the many strategies that derive and focus on building dependency by the assertion of dominance and control. And is Gable ever domineering in this film. He dictates Ellie’s movements, her schedule, her spending, keeping her always in close proximity, never allowing her to feel good about herself. The only reason he is not a kidnapper is because he never actually uses force. But in every other way, he’s steadily controlling her, reducing her options, substituting his opinions for her own. It’s a study in domination. Indeed, the funniest scene of the film is when they distract the Pinkertons on Ellie’s trail by pretending to be an abusive white trash couple having a screaming match. But given Peter’s drinking habits, one can uneasily consider this to be foreshadowing of the married days to come in the ‘happily ever after’.

It suggests an interesting continuity in misogyny. A great deal of the pick-up artist/ nice guy/ men’s rights culture seems to derive from certain a priori assumptions, assumptions that actually make a lot more sense within the framework of a patriarchal industrial society. At one point, marriage was a mechanism of the social contract- the universality of marriage served to assuage young men with the guarantee of a wife. The important thing to recall about the Fedora herd is that there was a point in American history where men were entitled to women on little more basis than steady employment, moderate wealth, and the absence of egregious cruelty.

My point is that Pick-Up Artists, are, more often than not, relying on old tricks re-branded in a new, pseudoscientific terminology. But it’s jarring to see this behavior portrayed as desirable masculinity, the marks of a leading man. What is sleazy in 2014 was charm and chivalry in 1934.