Imagine an LMFO video where bike messengers with terrible nicknames race against cars between dance offs. Imagine Kevin Bacon playing a failed stockbroker gutter-punking a ten-speed on his way to self-enlightenment. Imagine a world where vague, nonsensical dialogue replaces meaningful human interaction, where cars are for psychos, where one man’s dream of leaving the rat race is owning a hot dog stand.

This is Quicksilver, and you clicked on this link, so follow the rabbit hole and see what happens. You need to suspend all disbelief and descend into madness with me. Close your eyes. Take three deep breaths. Here we go.

You just took the red pill to Peddleburg!

It’s 1986, and you’re watching the hit movie Quicksilver, also known as HONK HONK! HEY WATCH IT! Bikes weave in and out of traffic, terrifying drivers with every daring maneuver. Stupid drivers. They don’t know what it’s like to live in the real world, which is constructed of chains, gears, and fingerless gloves.

Hi, I’m Kevin Bacon. This is my bike. I work for a company called Quicksilver. I live in a ratty loft with my ballerina girlfriend who is a total snob. She doesn’t get me, despite… oh shit it’s time for us to have a dance off! 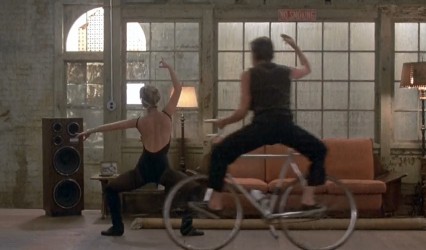 If you rented a loft in the 80’s, there was usually a section in your lease involving mandatory interpretative dance.

OK, where was I. Oh yeah, I used to be a hotshot stock broker, but I lost it all. 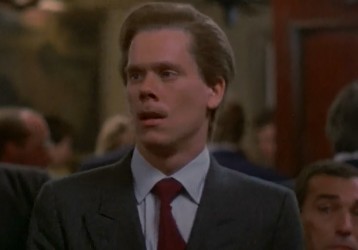 I just invested everything into shares of mustache combs

I even lost my parents’ savings. Yes, I put my dad’s retirement into one giant trade because that’s what successful stock brokers who work with big companies usually do. Anyway, after I accidentally flushed myself back into the lower middle class, I realized I’d only be happy inhaling carbon monoxide while smashing my hemorrhoids against a plastic triangle. I’m making a difference. It’s totally different from being a stock broker. I still take pieces of paper from rich men and deliver them to other rich men, but now I do it for minimum wage while wearing a beret! This is my new life. 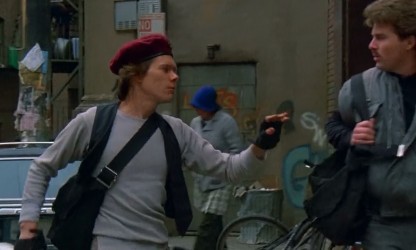 There is nothing like it: The wind through my hair. The timelessness that speed creates. My nutsack splayed across my bike seat as I roll violently down a flight of stairs. This is living. This is what I… holy shit it’s twenty-seven minutes in and time for another bike-dance-off!

Look, I’m not saying it doesn’t get weird sometimes. 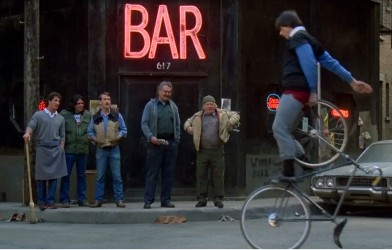 OK, now I’m going to shove this tire up the crack of my ass and spin it! 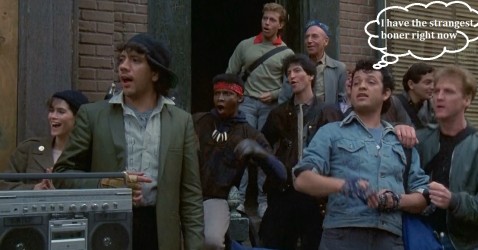 Whoa, he put skidmarks on his skidmarks…that’s like, so meta

Things were going great. Then, this guy named Gypsy, who apparently lives in his car, killed Morpheus and made the new girl deliver drugs for him. The plot is all over the place, but so is life. All of the conversations make sense. Watch me try to tell my dad stuff, and he tells me stuff back. We’re emotional and real people just like you.

Bacon Dad: You have a smart brain!

Bacon Son: Let’s talk about you working a double shift.

Bacon Dad: You waste your future on that stupid bicycle!

Bacon Son: I learned it by watching you!

Bacon Dad: I have to go outside and fix my car now.

Bacon Son: I blew your future on shares of mustache combs!

Bacon Dad: You did your best.

Bacon Son: My bicycle is my best!

Bacon Dad: I want to end all of this.

Bacon Son: You took the red pill. You’re trapped in this movie forever! 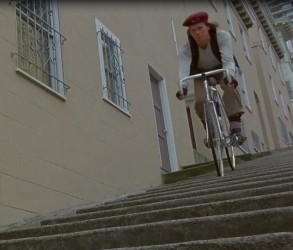 Now my dad needs money and so does my best friend, Hector. He wants to open up a hotdog stand and needs seven grand…because a bicycle with a heated compartment costs that much in 1986. And Terri, the new girl, is homeless. I’ve been studying the stock market in the newspaper for two days straight and I think I figured out a way to beat it.

I put on an old suit and peddle down to the stock market, and they let me in no problem. I walk onto the floor and just start making trades because that’s a thing that they let anyone do. I’m losing, but I call my old buddy and he lends me some more money and then I start winning! I know this because of the optimistic sounding music playing in the background coupled with an old man counting up to the number four. Each time he says a higher number, that’s just more money I’m winning. This stock market thing is so easy! I stop him at four because I don’t want to be greedy. I learned a thing or two from living in bicycleland.

This is where the movie should end, but this is 80’s action, and one murdered Morpheus won’t fill the quota. We need more blood.

Gypsy beats the shit out of the new girl in a woman’s restroom. The fact that he brazenly went in there shows he doesn’t respect gender boundaries and is a meat headed CIS monsterman, and the fact that there was no seperate trans-feminim bi-gender intersex bathroom in that diner really shows how behind the times we were in 1986. Really makes you think.

This is a metaphor for the internet gender wars of 2014.

So what happens now? We get a show down between my gang of bike messengers VS. a drug-dealing, arms-dealing rapist who lives in his car. God I miss the 80’s. The only thing that could make this better is if one of the alien worms from Tremors crashed through the street and bit someone in the sack.

Gypsy takes a few bottles to his windshield before manning up and driving over the gang’s main mode of transportation, rendering them useless. This is the equivalent of cutting the ponytail off of a samurai. To add injury to insult, Gypsy whips out a .38 and shoots one of the hipsters in the shoulder before peeling out and chasing the new girl who ran away in terror.

Now it’s time for me and Gypsy to have a twenty minute chase scene. It all comes down to this: Car VS Bicycle. He gains on me, but I make a swift turn around a corner. He has to put it in reverse and turn awkwardly to follow me. He catches up on the straight parts, but I gain distance on the curves. It’s a simple concept, but we do it over and over and over and over. This is NASCAR for hipsters. Somehow after turning down an ally, it’s suddenly daytime. Neither I nor Gypsy seem to notice that the sun suddenly appeared out of nowhere. In Quicksilver, the sun rises and falls at the behest of the bicycle Gods. Just when you think that you’re stuck in a Groundhog’s Day loop of perpetual hipstercore bicycle justice, mercy is granted by Gypsy driving his car…well, I made you a picture. 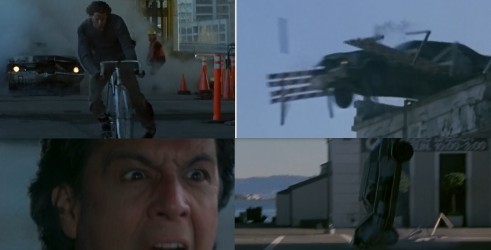 I think I could have made five of these pics and just skipped the review all together.

That’s not quite the end. We need more closure. I, Kevin Bacon, meet up with the new girl, and we are suddenly a couple. I tell her that I have some  good job offers, and she responds that she’s going to be a paramedic. It’s great. I get to save people and drive an ambulance! she follows, just in case I don’t know what the word paramedic means. We argue over eating pizza or Chinese because those are the only two foods the script writer probably knows about, but as we are walking away we stumble upon a certain hotdog stand managed by an old friend who finally made it out of the barrio. 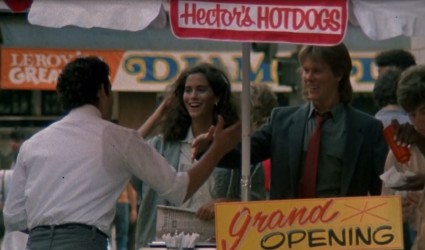 Welcome to my seven thousand dollar steam pan! Two hot dogs? That will be $87.50 sir.