Home / Featured Posts / You Won’t BELIEVE What A Piece Of Shit Transcendence Is!

You Won’t BELIEVE What A Piece Of Shit Transcendence Is! 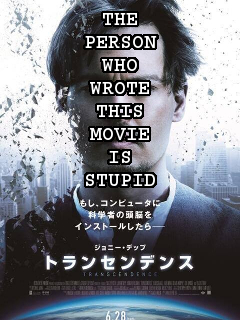 Panic In The Intertubes

There comes a time in everyone’s life when they have to listen to someone who happens to be a douchebag fire off this trite, overused saying:

“Think about how dumb the average person is. Now remember that half of them are dumber than that.”

Of course, this is only true if the average is equal to the median. It’s been pointed out far too many times that the correct version of this saying would include the phrase “median individual” instead of “average person”. Despite how obvious this is, the saying continues to be stated in its incorrect form by douchebags, while another equally annoying group corrects the douchebags every single time. This is perhaps the defining conflict of our age: The people who confuse the average and the median, and the dorks who think they are genius mathematicians because they can point this out.

As Richard Nixon once said, “Fuck them all.”

This is Transcendence. This is the question that it answers.

I want to be clear, now: I am not saying that this movie is in a one-to-one correspondence with a guy jerking himself off. Imagine, if you will, the scene of this gentleman engaging in self-gratification. Imagine his thoughts and feelings, the delusions of grandeur sweeping over him as he thinks about his beautiful techno-savvy screenplay, the poster of Jeri Ryan on the wall, and all the other constituent aspects of the scene. Now, ask yourself this question: What if this situation was real? What if this situation had a consciousness? What would it be like? What would it think?

This is Transcendence. This is where we are. In America.

This movie was already reviewed on this fine website, but I can’t help myself. It is just offensively, aggressively retarded. In case you missed the preview, the plot involves Johnny Depp’s consciousness being merged with a computer AI, and its subsequent attempt at becoming the benevolent ruler of the world. At one point, an FBI agent notes that the only way to stop him is to “shut down the Internet.”

And how many Internets are they going to shut down? That’s right, folks: All of them.

Remember, though, that we are watching the film. Thus, we are also part of this whole scene. The screenwriter is jerking himself off, coming in his pants as he thinks about how amazing the name “RIFT” is for a terrorist organization, and we are there. We don’t really want to be, but we’re there, standing off in the corner, trying not to be seen, losing our religion, and just feeling very uncomfortable. We’re not casting judgment. Heavens, no! We are enlightened individuals that cannot judge. But we’d be less than truthful if we didn’t sheepishly admit that this situation leaves us a little nonplussed.

He really gets into it, too. He has no shame. He’s just cranking on his own dick, audibly telling himself, “That’s right. The techno-terrorists are talking about how the AI copy of a person is just a copy, and not really them. Oh fuck, that’s so deep. Oh fuck, I’m so brill… OH!” All over himself, guys. All over himself, and no, he’s not ashamed. As we get over our initial shock, we come to a unpleasant realization:

We can smell it.

But we’re still standing there. For nearly two hours, we’re there, absorbing all of these events and trying to process them to no avail. We can’t help ourselves. It’s just a never-ending downward spiral into complete stupidity. Did you know that, like, Y2K times 100 is 200,000? Holy shit, bro!

The Internet is bad because people are disconnected via their connections. Smartphones are bad because people are like, talking to each other with a phone instead of in person. Nanotech is bad because what if someone, like, hacked your brain, bro? Strong AI is bad because HOW DO WE KNOW THAT IT WOULD HAVE MORALITY AMIRITE? What if we’ve got immortal souls and shit? You know? What if God didn’t want us to be copied? Hey, the AI is cleaning up the air and the water, but he’s still a machine, bro! Hey, what if I came in my own face? I mean, what if I came in my own face right now? I know I did that the other day, but what about right now, bro?

The final assault is the most fucked up thing the United States Government has done since Waco. The AI has not harmed anyone, and does not harm anyone during the entire film. He uses his advances in biotech to heal the sick; his only real “offense” is networking their minds as part of the augmentation. He does this so that he can get the Lawful ending of a Shin Megami Tensei game, where the angels from Heaven turn the world into a benevolent dictatorship by subduing the individual’s freedom. Anyway, the government and the terrorists join forces to take him down for no real reason. Like I said, fantastic writing in this movie.

Johnny Depp gets tricked by his wife, sort of, and both of them are killed by a computer virus that subsequently shuts down the Internets. All of them. I can’t even deal with this shit. A keyboard is used as a doorstop because nothing works without the Internet, right? Like, there is no device called a generator that is used to convert other forms of energy to electrical energy. Nobody ever made such a device. They don’t exist. The only way to get electricity… is through the Internet.

The only thing that still works in the wake of the Technopacolypse is the writer’s dick, as he plays with himself yet again while some of Johnny Depp’s nanobots glitter back to life as we cut to credits. Hey, maybe like his soul is still out there, man! Wait, how did he get taken down, again?

I hope you’re sitting down, America, because I’m about to drop the big one, here: The virus that takes down Johnny Depp is written by his colleague from earlier in the movie. This colleague was captured by the RIFT terrorists and subsequently joined them because Stockholm and stuff. Anyway, he notes that the AI that Johnny Depp merged with was “based on his source code”, and thus he is the only person who could write a virus to hit Johnny Depp. Because, you know, that source code is still being used by a consciousness that is capable of rewriting itself, as is established like five seconds after it first comes alive.

You know, I recently read through the book Did Six Million Really Die?, after I learned that it was an actual book and not just an Internet joke. Yeah, it was terrible, and the assertion that the concentration camps were really forced labor camps and that all Jewish deaths in the Holocaust were mere consequences of that environment is laughable. I mean, it’s just like: Oh, the Nazis just forced people into labor camps and they died due to their treatment there, rather than being sent to death camps? Well, I guess it’s all good, then. All apologies!

But Did Six Million Really Die? is at least advancing an argument. I mean, it’s at least coherent. It’s a ridiculous argument, and it’s obviously not logically sound, but I could at least understand what they were trying to say. After reading the book, I understood the author’s point: They hate Jewish people. Ok, yeah. I got it! With Transcendence, though, I’m honestly at a loss. I really don’t know what the point was, here. What were they trying to say? What was the point?

In conclusion, Transcendence is worse than Holocaust Denial. Thank you.