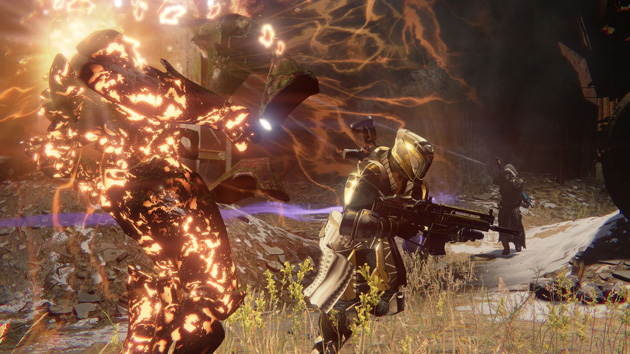 For all the hype and marketing, Destiny really is nothing more or less than Halo meets Borderlands. This is to say; its like playing Borderlands, but with combat that doesnt make you want to stick your massive firearm in your own, real-world mouth. The first dozen hours of the game deliver a pretty fantastic experience that combines equal parts Halo and Borderlands, alongside trimmings of the late, great, dearly departed Phantasy Star Online.

The rest of the game? It sucks, thanks to sparse endgame content and the stingiest loot drops I have ever seen in a video game.

Given the pedigree of developer Bungie (they made Halo), it should be no surprise that Destinys shooting and feedback loop is top-notch. In Borderlands, combat was boring, feedback was flat at best, but every few hours my stats went up and little numbers popped out of the enemies when I nuked them, so my brain let me think Im having fun even though the act of shooting a gun in Borderlands was like having a root canal through the peehole. You still get the numbers and leveling grind in Destiny, but the actual mechanics of each encounter have a distinct Halo-like feel to them. Most crucially for games of this nature, Destinys guns feel powerful, especially the appropriately named hand cannon revolvers. Aside from firearms, each of the games three character classes get unique melee, grenade, and special abilities that are just as satisfying to land as headshots. Tossing a homing grenade into a pack of enemies, then shooting the lone survivor from afar before shanking him in the face as a finisher never gets old; nor does blowing an opponent off a ledge with a single shot from an overleveled hand cannon.

Whereas Borderlands script featured atrocious Internet meme humor copy and pasted to the line of plagiarism by its writer (this chucklehead, who responds to criticism of his writing on social media with things like I hope all the people you love decide youre a peace(sic) of shit and turn their backs on you and I hope your family abandons you in a time of need.), Destiny sticks to the patented Bungie storytelling process. That is to say, it drops a ton of vague, pseudo-mystical sci-fi terms on you in lieu of a story worth a crap. For as much as Bungie likes to give grand, stupid names to characters, factions, and macguffins to make them sound epic, all you really need to know about Destinys narrative will be relayed to you via Peter Dinklages robot-filtered voice telling you to shoot stuff. Its not good storytelling or delivery  Dinklage sounds about ready to fire his agent with every line of dialogue  but I much prefer this approach to the get players to care about the generic sci-fi adventures of a generic green-armored superman by putting a blue hologram sex waifu in his head style on display in the Halo titles. Despite the recognizable  and undoubtedly expensive  roster of beloved character actors (Bill Nighy, Nathan Fillion, Lance Reddick, and Gina Torres all make appearances in addition to Dinklage), Destinys script is mostly just there to enable you to shoot, get new gear, and unlock abilities. Its good stuff.

That is, until your character hits 20 and reaches the level cap.

Theres nothing wrong with a level cap of 20. The recent Fallout games had a level cap of 20 and they were great. But in Destiny, reaching level 20 is something you can do in a weekend. Bungies on record as having structured Destiny to have the max level cap attainable within the length of a standard single player game, or 8-12 hours of play. At this point, a new stat essentially replaces your old experience bar. This stat is called light, and it will ruin your life. Basically, light is what allows you to level up past the cap of 20. Each piece of rare or legendary gear you find has its own light stat. When you equip it, this number is added to your total. When your equipped gear light value totals a certain number, you level up. Leveling up past the cap is required for some of the games better post-game content, most of which is meant to be taken on in a team with other players. Again: This, in itself, isnt a bad thing. Games like Diablo 3 turn the loot grind into a zen experience of sorts by providing the player with satisfying, visceral onscreen feedback, and a constant progression of slightly better gear. Destiny nails the feedback loop, but sucks at doling out the loot. See, by the time you hit level 20, the story content is likely done. All thats left is running the same mission segments over and over again at higher difficulties with others, or engaging in an assortment of traditional competitive multiplayer modes.

You know what drives players to do these monotonous tasks until the inevitable sequel? The promise of better loot. But that loot never comes, folks. Most of the endgame loot youll find is unusable, low-level garbage. Other times, youll find mystery drops that may contain a rare or legendary item, only to redeem it and find  you guessed it  more trash. Its insane that this loot system made it into the product  a player could grind through hours of Destiny before finding a single item worth a shit as the result of killing enemies. Even completing high-level missions and dominating multiplayer matches wont guarantee you anything, as the reward system for multiplayer is completely random. Thats right  it doesnt matter if you place first or last, or how well you did in co-op: Everyone has the same odds to get a mystery drop (thatll probably be shit anyway). Bungie fancies this system as fair for less-skilled players. I call it a communist fuckin nightmare. Thanks, Obama Bungie.

The only way to reliably have guaranteed access to top-level gear is to gain access to it from vendors. Guess how you do that? By playing the same content over and over and over again, for untold dozens of hours. Whats more, each individual vendor requires you to repeat this glacial slog before you can buy from them. The cherry on the shit slurry sundae? Even if you rank up enough to unlock access to a vendor, you have to also accumulate new forms of currency to buy from them. These currencies are only available by  say it with me now  playing the same content over and over again, and Bungie limits you to 100 units of each per week.  Destiny is full of shitty design decisions like this. From requiring you to manually assemble (ie; no random matchmaking) your own squad of players to access the games best mission, to a high-level merchant that only shows up two days out of the week in a random location, Bungie has made a game that draws in its players with a little bit of charm before turning on a dime and battering them. Fuck a sequel, this thing needs a Lifetime movie-of-the-week.

At best, I suggest giving this thing a rent. The campaign mode is a solid exercise in generic sci-fi wank, supported by some of the best mechanics in any first person shooter of the last few years. After the credits roll, however, youll have to ask yourself how much you love doing the same thing over and over again for nothing in the way of rewards.