Until this very moment in time, I had taken great umbrage to the Rights near-fanatical insistence on the concept of American Exceptionalism. That chin-first, empty charade of belligerent bellicosity, where the first and last identifiable characteristic seems to be the novel idea that history is only as relevant as its ability to wash away centuries of sin. We were powerful, wise, and above reproach not because we learned from our mistakes, but rather by avoiding error altogether, transforming complexity and nuance into palatable, mush-like banalities of untouchable supremacy. If it ever hoped to be, it had to walk among us. And if it ever was, it must have, by necessity, been born of our flesh, our soil, and the very blood that ran through our veins. We were first in hopes, number one in dreams, and all but unsurpassable in the realization of each. It damn near brings a tear to the eye.

As if any of it were true. In reality, if its worth doing, were not doing it. If its sensible, well hold out for the alternative. And if its just, fair, or tolerant, well stand pat with obstinate paralysis until mommy throws the goddamn toy in the cart. You know, the one that relieves us of anything even approaching responsibility. In short, were exceptional only in our utter absence of the very same. Until now. Call it a crossroads. A new order. A road less traveled. The bottom line? Were on top again. Sure, weve gutted the middle class, frozen wages in some Nixon-era time warp, rounded the far turn on climate change, and argued with stone-faced sincerity that in the wake of two dozen pint-sized Connecticut coffins produced by gunfire, it was best to reload, but why imbibe depression when we can at last down a shot of exhilaration? I speak, of course, of Casey Nocket. The worlds most despicable human being. And shes all ours. 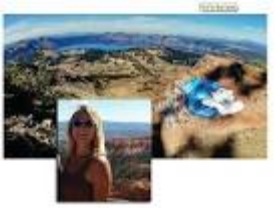 Casey Nocket. It may or may not be her real name, but its real enough to allow for a short summary. I could leave it at New Yorker, and feel quite comfortable in doing so, but simple decency forces me to go further. Shes also a woman. Again, I could stop at that all-encompassing lode star of evil incarnate, but still, we must venture on. Ms. Nocket is that human being, who, specific to this particular moment in time, through free will and malice aforethought, traveled from her Empire State abode to destinations due West, all in the selfless desire to share her creativity with the world. Spread that rare scent of menstrual blood and moral sanctimony. She is an artist. The world is her canvas. Forces thereby combined, she will paint  paint, I say, as in acrylic  assorted faces and images on the rocks, cliffs, and stone walls of our National Parks. Ten in all, including Joshua Tree, Yosemite, Death Valley, Canyonlands, and Zion. No mere sand castles on the shore, these are permanent and penetrating. Lasting impressions. Wounds that cannot heal. Bloody, pus-filled scars. They are not destined to float away, like petals on the wind. They are fixed and final, abhorrent distractions from the landscapes they corrupt and pollute.

Casey Nocket. Anonymous and unwise, determined to make her mark with the only device left her. Feminine insignificance, her brush as vengeance for a life on the margins. As she travels, tortures, and lives on, she adds a signature  Creepytings, a moniker as predictably precious as the simple mind that crafted it  as if to acknowledge that art most often fails when it first surrenders to the artist. Biography trumps meaning. A creator without anything to create. The raw, juvenile scribblings  not daring, not bold, not insightful in this context or any other  are ultimately made criminal by their mediocrity. Not that a masters touch would dull the roar of outrage, but its undeniably true that what brings all this to the level of unspeakable atrocity is that a woman felt compelled to annihilate not out of ignorance, nor clueless derangement, but rather the purposeful, intentional, unapologetic belief that what flowed from head to hand could, in its way, improve the natural world. Chicken scratch over El Capitan. In the full flush of a moments indulgence, she challenged a billion years of wonder. Waters flow, earths brutal push, a hundred thousand turns of weather and uplift, all cast adrift on a lone females ocean of unrivaled arrogance.

But she knew more. Had so much to give. Encountered an endless valley floor, saw only navel. A towering spire, a canyon, the crystal blue of a volcanic lake; all muted and inert before her maniacal hunger. Jaw unhitched, she would consume the world. What she regurgitated, of course, was but a larger, more repugnant version of herself. Flattered merely to be, as is, she would act on a promise. Men conquer territory; women, our very souls. What they cant kill in flesh, they crush in spirit. Art, then, is their final excuse. All the desire, none of the payoff. In the end, they havent a thing to say that isnt circular or self-directed. Challenge them to think big, and the best they can do is a sexualized flower. If not nakedly a victim, then unabashedly triumphant. Casey Nocket on a couch, the worlds most predictable diagnosis. Yes, its about the parks. The glorious, uncaring sky. The land that came before and lives beyond. Much beyond. And its also about this woman. This wretched beast, this reductio ad absurdum, feasting on our collective inheritance as if to salvage her silliness. Instead of a memoir  why she couldnt, why she didnt, why she hadnt  she maimed a mountain. A tattoo upon the soil, as if to stand above a thousand unearned slights.

All told, she is the product of us all. As American as a rush to judgment. Sold the only bill of goods that means a thing at this late date: that we all have something to contribute. That our voices matter. They do not. They will not. As such, we slander our betters to avoid the truth that eats away at our already declining hold on reality. We insist on ourselves when the one true place remains the darkness, somewhere (always) near the back. Still, its not enough to admit ones inherent worthlessness; one must also keep quiet about it. Plenty of folks sense it, then shoot up a mall to deal with the fallout. Tidying up and going away, then, is the true mark of heroes. The sort who peers over the abyss only as a precursor to jumping off. Not one, as Casey Nocket would have it, who leans back, straightens up, and carves out an accusatory chasm in the earth. That Ms. Nocket hates herself is a given. And ultimately forgivable. That Ms. Nocket hates us more is only proof of her ultimate delusion. And the greater crime. She commands an audience. Wants the rest to bear witness. A self-immolation as college thesis. Nothing worth doing unless theres a crowd. Its why even disgust might keep Nocket afloat. What she truly fears is indifference. 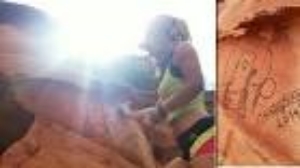 What, ultimately, must be done with dear Casey Nocket? From her previous social media frenzy (Twitter, Tumblr, and Instagram housed her wares) to the more recent silence, she might prove elusive in the end if we all didnt know exactly where this was headed. Another sort might be able to inhabit the underground, but for a woman who believed her portraits could, at minimum, co-exist with the Grand Canyon, facelessness isnt really an option. Shell come up for air soon enough, though not until the lynching parties have retreated somewhat. Shell beg forgiveness (or not, if shes true to form), pay a fine, then write the inevitable tome that lands her just enough money to inflict more art upon our too-trusting culture. And then, perhaps, shell recede once again, like so many whose visions of immortality were ultimately blinded by a searing lack of talent. But we cant allow all that. Short of an extremely long stint in federal prison (measured in years, not months), several thousand hours of community service, and yes, restitution for all clean-up and restoration, she must pay the ultimate price. Blood for blood. Life for life. An end to all the suffering.

Am I suggesting that Casey Nocket should die for vandalizing nearly a dozen National Parks? Well, yes, but Im also a realist. She will live on, of course, even if a million internet enthusiasts push her to the brink of self-slaughter. For as we know, evil never dies, and the people who haunt us the most never, ever leave. Ive been praying for a grandmothers death for over twenty years, and shes about to see her one hundredth journey around the sun. A stepmothers heart beats defiantly on, when we all know her final breath would pay off my credit cards. These are the sad turns we face. But if Casey Nocket soldiers forth? With working hands and a brain unburdened by high capacity rounds? My sleep is restless enough as it is. No one of good conscience should be forced to share the same air as a woman who wakes up wanting to slather paint on federally protected land. Whose first inclination is not to share, lend a hand, contribute to our well-being, or even hold a fucking job, but instead enter one of the few truly democratic areas left us and blow it up like it couldnt possibly mean anything to anyone. It had to go because she alone saw nothing worth preserving. Like the man who kills the girlfriend so no one else can have her.

All that said, and in defiance of all logic, Im still going to push for suicide. Yes, Casey Nocket, I want you to kill yourself. Poetic justice would call for a leap from a Giant Sequoia, or a waterless hike into a Death Valley July, but that would just mean wed have one more of your messes to clean up. No, Id prefer you swallow a bottle of pills (pick one, we know you have quite the selection), inject air in your veins, or slash your wrists to ribbons. Bleed out, dry up, and surrender. Something sharp, something lasting, something with a little delay. Not too quickly, lest we think you got off easy. Cry out, if only to humor us a little. And when youre gone, at last, well speak of you no more. Back to the dust, to that time  a mere week ago, if you can believe it  when I wasnt even aware of your existence. A good time. A blissful time. A time before you reminded me that whenever I think weve reached bottom, another rung appears, taking us further into the belly of the beast that were still calling America.