I usually gorge on horror movies on Netflix sometime around Halloween. This time I did it around New Years. If the desk jockeys downtown have a problem with that, they can go to hell. I love movies about Satan, demons and cults and went on a mission to find some new ones. There arent enough, but here are a few. 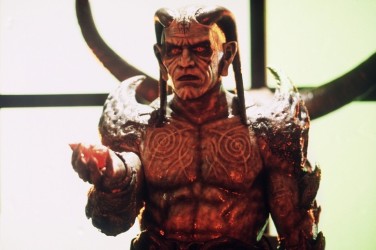 Gore is cool and Wishmaster has a parade of excellent novelty deaths with a vaguely slapstick, Evil Dead 2 approach relying mostly on practical effects. This alone should have made it a bigger cult classic. For example, a mans skeleton claws its way out of his body and goes on a rampage, skeletoning people to death. But, during this horrorgy, I figured out that what I really love in a horror film is an interesting ontology. I want a world with a ton of cool shit in it and for that cool shit to be governed by cryptic rules that vary according to the needs of the script.

Wishmaster starts in the ancient middle east, which brings my chances of liking it close to 100%. Were going to be dealing with ancient wisdom, forbidden knowledge and forgotten mythology. Here we learn about the Djinn, which are the original versions of genies, a creature from the mythology preceding Islam. If you discover a Djinn, you get three wishes. After the third wish is used, the Djinn get to come into our world and conquer it. The evil Djinn of this film has unlimited power (thats good), but can only use it when someone asks him for something (thats bad), but the requests are open to interpretation (thats good). You wish for a giant cock and a 40 foot rooster tears of the roof of your house and devours you. You ask for a million bucks and you are trampled to death by a deer swarm. 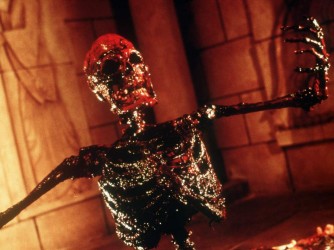 So the only way to defeat the Djinn is to outwit him with a wish that he cant corrupt. When our protagonist, the lovely Tammy Lauren, raises this possibility, the Djinn erupts with laughter and mocks the idea that a mere mortal could outwit an eternal being with millennia of experience. But the world isnt ruled by Djinn so that means that anybody who has ever run across the dude in the past has outwitted him and sent him back to living in a stone. Also, there are three sequels in which other people outwit him.

The Djinns snark and mockery cover his vulnerability and shame. Maybe this is why hes such a jerk. At first he would grant your wishes in a nice way, but then people started abusing him by doing things like wishing for a million more wishes and he turned against them, growing more bitter and angry with each outwitting.  It would be kind of cool if someone found a Djinn and a panel of great scientists and philosophers was assembled to construct wishes that had no loopholes and would do the maximum good. Only one person would like that movie, but I would really like it.

Wishmaster didnt really touch on my primary genie related fear, which is that a genie would be floating around and was just going to grant whatever wish you made, and that this would happen when you said something like, I wish I had remembered to ask for some mustard! And then the mustard would just appear, along with the genie who would wink at you and vanish, leaving you with the knowledge that you could have had anything but you wished for mustard. Still, I really enjoy Wishmaster.

The Sacrament is a fictionalized version of the Jim Jones massacre/suicide, set in the present and told via a Vice mockumentary. This comes to us from Ti West who made House of The Devil, another solid Netflix option in this area. Theres nothing supernatural about The Sacrament. I was hoping that Jim Jones (Father in the movie) would turn out to be a demon or at least a CIA agent. No dice. However, it is very well paced and, for me anyway, tense. I was surprised to find that reviewers generally found it to be slow and boring. I guess this is because it is slightly mislabeled as a horror film. Taken without preconceptions, The Sacrament is an excellent piece of suspense. Most of the movie is about being in a situation where it feels like something horrible could happen any second. I felt like I was being followed by a cop for most of the runtime.

Part of the films creepiness comes from an understanding of the logic of the cult. First you have desperate people who have little chance of a happy future in American society, like drug addicts and members of the racial and economic underclass. They see our culture as morally and spiritually sick. How could they not? They decide to take a chance. To leave the sick society that offers them little opportunity and try to create a healthy one in which they can flourish. If it doesnt, suicide can seem a reasonable recourse. Rather than be rounded up and shipped back to ridicule and even greater poverty and disconnection than they had before, they take control of the story and end it on the spot.

They bet everything on a longshot. A 10% chance of a happy, healthy future. A 90% chance of disaster. If you’re desperate enough, that can be a smart bet. As Father points out, were all going to die at some point. We might as well go for gold. Its kind of inspiring really. Im starting to see these things in a new light, since I discovered the teachings of Unarius.

In my almost certainly isolated opinion, the Damien/Omen movies get better as you go on. Maybe the artistic merits of the films diminish but who cares about that? In part II a dig in the mideast reveals a mural with a painting of Damien, which convinces various people that he is the devil boy. Also, as per usual, anyone who tries to thwart Damien winds up dead and it becomes difficult to ignore the coincidences. Now entering adolescence, Damien uncovers his identity and lovers of Satan begin falling into place to aid his ascent. For example, Thorn Industries is usurped by a man who advocates taking control of the food supply in the third world to extort money from populations forevermore. The ability to manufacture famine and alleviate it will give Damien tremendous power. Its kind of a trip to watch an old movie where devil worshippers bent on bringing humanity to its knees advocate Monsantos business plan.

The Damien stories are driven by an interesting quirk of the human experience. When something outlandish and dangerous threatens us, were rendered helpless by our skepticism. One after the other, characters realize what is happening. But it takes overwhelming evidence for them to  really accept it, which is as it should be.You cant go around murdering kids willy nilly just because they seem kind of Anti-Christy. However, if someone had done that, they would have had a good chance of stopping Damien.

When they finally accept the truth, potential heros try moderate solutions which serve only to expose their hand. When they finally resort to desperate attempts to kill Damien, hes ready for them and they havent a chance. There are some problems that can only be solved by rash and credulous fools who stumble onto the truth.

Its cool to imagine that Satan/Damien and God/Jesus are real, but there is no such thing as an afterlife for human beings. We are just pawns they manipulate with fairy tales to gain power in our world and whichever one wins will treat us like shit. If we just ignored both of them wed be better off but nobody knows that. 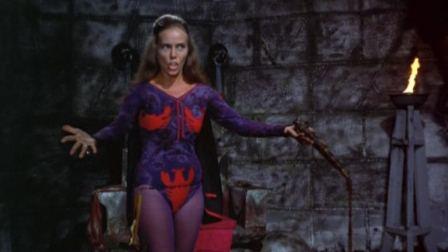 Back in the early 70s, there were still some people who thought that God was a real person. So there were more exploitation movies covering this material. I decided to watch this one from 1972 because Tom Selleck is in it. Theres a name I associate with quality entertainment.

I was shocked to see Daughters of Satan open with a naked woman hanging from the ceiling of a dungeon over rows of spikes, being flogged by another woman, who was demanding allegiance to the lord of flies as a multi-ethnic audience delighted in the torture. This is a Satanic ritual all right. I always wonder how all these people met each other, especially pre-internet. Maybe they all belong to the same Amway group.

So, Tom Selleck buys a painting of some witches being burned at the stake because the lead witch looks like his wife. She freaks out a little bit. It is a little bit of an awkward situation. Hey honey, this person being burned alive because she is evil really makes me think of you! I think theres a Luther Vandross song about that. Anyway, the wife and some other people are kind of possessed by the painting and try to kill Tom Selleck a bunch of times. Its not a very good movie, but decent enough to get through if you want to see a 70s exploitation movie. It has some cool scenes and some Rifftrax worthy scenes and one of my favorite pieces of dialogue: