Home / Featured Posts / The Bright Side Of The Worst Election Ever

The Bright Side Of The Worst Election Ever 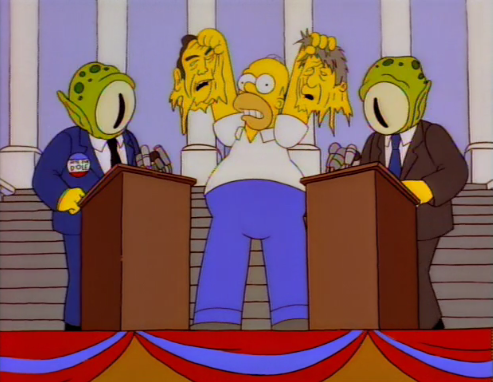 In a little over a year, the United States will likely find itself facing two dynastic, moneyed families, raising money from other moneyed families and multinational corporations, to conduct a purely cosmetic election which will do its damnedest to avoid the topic of money. Classic social hot buttons will be pressed to release the smokescreen of the much vaunted American culture war. Hillary Clinton will do that thing at rallies where she ends every empty rhetorical statement with those unblinking eyes, that hollow laugh, and that measured nodding through a mechanical smile/sneer one could imagine on Temujin as he gazes longingly at some unguarded Indo-Chinese village. Jeb Bush will spout folksy bullshit about his dry drunk brother, and how, if you want to know about torture, you should hear what’s on Dubya’s iPod! I will literally kill myself a million times at once. This will be the worst election we’ve ever had, but there are all kinds of things to look forward to.

No, really, there are.

The fact that Bernie Sanders will be running is one of them. The two-ring circus of incestuous, plutocratic political power really isn’t half as amusing without a barker who’s in on the joke, and I wouldn’t wait for anyone in the media, outside of comedy shows, to fill that role. Fortunately, there is Senator Sanders. Mr. Sanders will not win, practically speaking. The country, for a myriad of banal, disappointing reasons, won’t vote in a third party candidate yet, but it might listen to one. I have no idea why the increasingly irritating public appeal to Elizabeth Warren to throw her hat in the ring persists; Warren would indeed be a superior candidate to Hill-Dog, or for that matter any of the other arch-conservative corporatist candidates that will exclusively populate the Democratic field, but so is Sanders. And out of the two of them, one is making every indication he will be launching a campaign, while the other channels Dr. Manhattan in demanding people leave her alone about the issue. Of every possible previous American presidential election, when it would truly be worth it to put a gun to Warrens head and demand that she please be the sole viable candidate to represent vulnerable people, this is the one exception: where weve got another guy whos willing and capable to do it.

Hell, a Warren campaign might well backfire. The Republican media war machine would truly have the ideological antichrist they pretend Clinton is, and that kind of galvanizing, WWE-quality, us vs. them, fevered delusional narrative works quite well for getting the Dont Tread On Me bumper sticker-types to the polls. It’s almost preferable to have two candidates were collectively sick to fucking death of before they even open their mouths to better build that quintessential, bipartisan American consensus of Fuck it, lets burn the whole thing to the ground and start over.

As the two preordained monarchs tap dance away from quantitative, meaningful analysis of anything real, Sanders will be able to go as aggressive as he pleases, delineating the soul-crushing sameness of the two dauphins on the only issues that matter. The capacity of a candidate to examine, pointedly, how much a full-time veteran of a McDonald’s, Lowe’s, or Wal-Mart makes per hour, or how much money is pumped into the two party machine by the very financial sector who coincidentally received only praise and remuneration as punishment for an unprecedented crime against the working class, grows exponentially, and proportionately, to the distance of one’s name from both D) and R).

Hillary Clinton should, under theoretical understanding of a democratic process and of the nature of the ills facing the United States, push relentlessly for a living wage: for closing tax loopholes and levying trade bans against companies who offshore their jobs and profits, as well as instituting the public financing of elections. She is, we are told, a smart woman. These issues are pertinent, they are without any substantive counterpoint (outside of perpetuating and exacerbating plutocratic influence in governance through increasing wealth inequality). These positions enjoy growing popular support from a liberal voting base invigorated by the Occupy movement, and by the presence of representatives with integrity, like the aforementioned Ms. Warren. She won’t address these things (at least not beyond aforementioned empty rhetoric), because she’s a calculating political pro, forever leveraging the gains from compliance to corporate backers against the meager advantage afforded by actually helping the country. Her celebrated stint as a senator in New York, dominated as it was by photo ops with sports teams and attempts to censor video games, is ample proof of her dedication to her career.

Even Jeb Bush, the latest excrement foisted onto the national stage from the kind of family too one-dimensionally sadistic and ambitious for inclusion in Westeros, could hypothetically do good from within the framework of the conservative party. Forgiving Republican voters’ collective blind spot/sexual fetish for militarism that has them failing to recognize that it is corporatized gun running, not lunch programs for poor kids, that is bankrupting the country, there is still potential in reaching them on subsidies. If the comparatively minor cost of assisting families in poverty has them seeing blood, there is certainly some hay to be made discussing the flushing away of an unconscionable amount of public treasure year after year in the name of simply enhancing the already delirium-inducing wealth of an Exxon Mobil. It’s Solyndra in a mobius loop, only worse. Similarly, the privatizing of prisons, apart from further dehumanizing our fellow man and perpetuating the pathetic war of prohibition on poor minorities, should appeal to a voting base (presumably) obsessed with saving money.

Privatized prisons cost more, as a direct result of bloated corporate bureaucracy, necessitating such innovative free market solutions as marketing and acquisitions departments that were nonexistent under public prisons. Oh, and hiring lobbyists, thus creating an additional incentive to pass laws with harsher sentences and longer prison time, for the sake of private profitability, and public penury. For fucks sake, weve got suburban hausfraus slinging AR-15s over their shoulders to assuage their paranoid delusions long enough to drive out for a burrito bowl: is there no fear among these idiots that once, just once, the unceasingly brutal war on the citizenry by its own bloated law enforcement might find its cuffs, boot heels, or bullets to little Skyler or Jayden or whatever the hell these mutants name their spawn? Really, its just Obammers healthcare that we need to shit ourselves over? The length and sharpness of Mr. Bush’s teeth on such matters, of course, is entirely contingent on them not being able to bite the hand that feeds him. And so we all know we will not hear a god damn thing from him on either issue.

The fact that 2016 will see two shitty, ineffectual, full-fisted corporate whores rig our country’s presidential election into a game of multimillionaires protecting the excesses of billionaires isn’t new, nor is it the point. The point is that, with two mediocre dynasties propping up two disingenuous and identical candidates, flanked by a lucid independent tearing his hair out over that very idea, we, as a nation, and not as two bitterly divided parties, might start being on the same page about that.