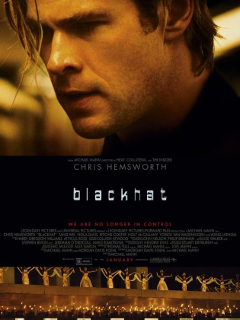 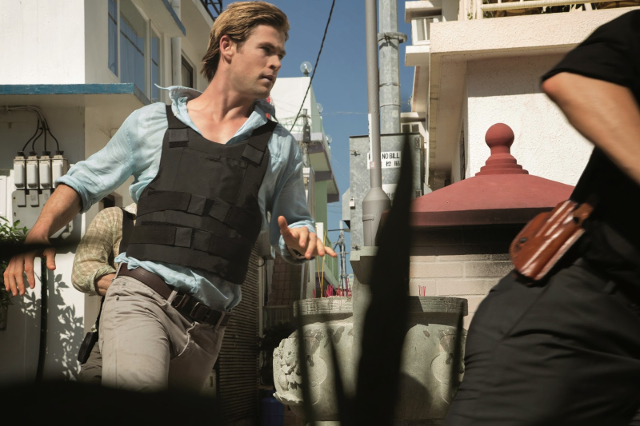 Every so often, a film comes out that reminds you just how retarded the vast majority of movie reviewers really are. They circle the wagons and attack the film, claiming that it’s boring and that they didn’t understand it. Somehow, these premises are supposed to imply that the movie itself is terrible. It doesn’t make any sense, and it’s an embarrassing argument, but they do it anyway. Such is the world of film criticism (and journalism in general) in the Clickbait Era, where the difference between the New York Times and Yelp lies in the URL, and not in the content.

I bring this up to warn you beforehand that, according to the Film Reviewer Hivemind, Blackhat is total garbage. People talk to each other and stuff, they look at computer screens, there are only a few shootouts, and sometimes you have to think and fill in the blanks yourself. You know, you have to pay attention. Can you believe the audacity of Michael Mann? Can you believe that he treats you like an adult and expects you to watch the movie that you’re watching? Who does he think he is?

This is America! If I want to alternate between texting and rubbing my genitals throughout the entire movie, that’s my right! More than that, the movie should make perfect sense no matter what I do during it. That’s the American Way, and that’s why Blackhat has been savaged by film critics. They went to take a leak at some point, came back, and were completely lost. “Hey, this movie sucks!”

By the way, the Hivemind claims that Elysium was a failure. This was news to me, but apparently, it’s true. Blackhat also bombed at the box office; I didn’t get a chance to see it back in January, as it disappeared from theaters in about a week and I was too busy working. All of this is supposed to make Blackhat a frontrunner for Worst Movie of the Year.

Take it from me, a person who has watched some of the absolute worst movies imaginable: these people are idiots, and Blackhat is a great film. 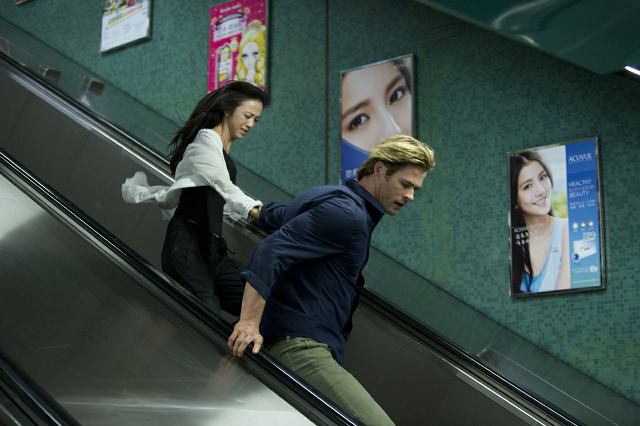 Blackhat opens with a blackhat hacker hacking into a nuclear reactor in Taiwan and causing an explosion. Why is the reactor connected to the Internet? I don’t know. Blackhat isn’t perfect on the technical side, but I’d say it’s at least half right, and the other half is good enough for me. Hey, they actually show a Bash prompt on-screen regularly, and they type actual Linux commands! Chris Hemsworth successfully mounts an external hard drive with the “mount” command at one point! He should get an Academy Award for that scene alone.

Anyway, the titular blackhat next hacks into a financial market and runs up soy futures to make millions of dollars quickly. The Chinese detective assigned to the reactor case ends up working with the FBI investigation of the Soy Futures Incident. He notes that if they want to catch the blackhat, they need the detective’s college roommate from MIT, who is currently serving time in prison for hacking. Yes, folks: they need Chris Hemsworth.

And with that, shit gets real. 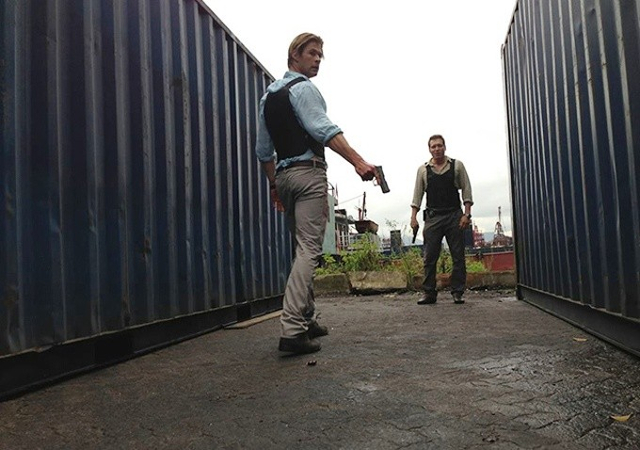 There’s no point in summarizing the rest of the film, as this isn’t a movie about the plot, really. No, this is a movie about Michael Mann getting lots of beautiful footage of various cities with some fancy new digital camera. It looks gorgeous. I know that sounds like a lame positive criticism, but I could watch a movie like this all day. It stands in stark contrast to most contemporary big-budget films, which are married to their garish color schemes and their CGI overload. If nothing else, Blackhat certainly looks refreshing. It may not actually beat Nightcrawler, but what does?

This is also a movie about hacking. Yes, there are some laughable moments in here, such as when they view comments in a compiled binary with a hex editor. Still, at least they used a hex editor, instead of that 3D CGI cubeworm program from Swordfish. Overall, this movie blows Swordfish out of the water on the hacking front. It also completely demolishes Transcendence, though that isn’t all that difficult. What I’m trying to say is that after Lucy, Gravity, Transcendence, Interstellar, and whatever else, Blackhat isn’t offensively retarded or anything, and they don’t have magical Hacking Fairies From The Fifth Dimension that show up as the deus ex machina at the end. By Hollywood standards, it is a triumph. 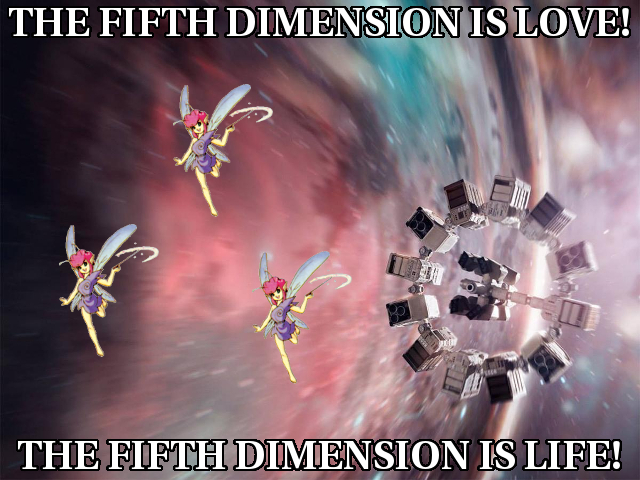 Pictured: The Ending of Interstellar (spoiler)

Most importantly, this is a movie for adults. They don’t bother to spell out every detail of what happens, and it is obvious that this is by design and not by overzealous editing. They do have the usual bits of expository dialogue to explain certain technical terms to the audience, but it isn’t nearly as intrusive as in similar films. So, if you were wondering why this movie bombed, the reason is clear: it assumes that you are not an idiot, and that you are capable of paying attention. That rules out the majority of the viewing public right there!

Now, reading over the review so far, I realize that I haven’t really given a clear answer to the question at hand. Here we go: should you watch this film? Absolutely not. Why? Because you’re probably an idiot. You’re just going to bitch and moan that there isn’t enough shooting, and shit all over it just like you shit all over the Miami Vice movie. Please, don’t watch this movie. I’m sure there’s a new episode of CSI you can watch or something. You’re a hopeless idiot and beyond all redemption. Just go watch whatever garbage it is you watch and leave me out of it. 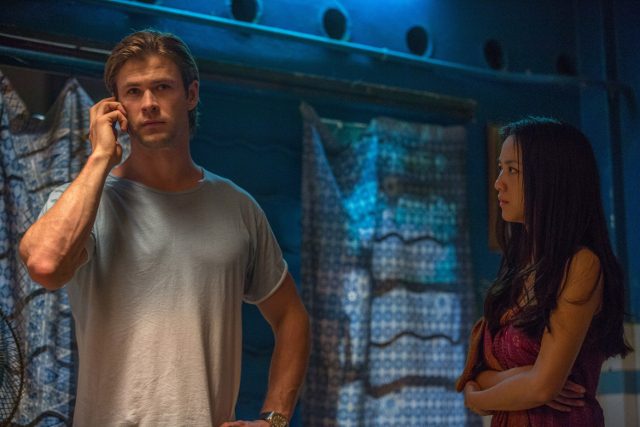 I don’t want to sound judgmental there, though. I cannot judge! Let’s ask a different question: Is this Michael Mann’s best movie? Probably not, but is it really trying to be? More than any other mainstream film I’ve seen recently, Blackhat definitely feels like the work of a director who is exploring his own interests on his own terms, marketability be damned. This is a film for the fans, not in that it was consciously made for the fans, but in that Michael Mann appears to be in a phase of his career that is of interest almost only to his fans. Everyone else is just going to ask: “What?”

Watching this movie has sent me off on a Michael Mann binge, however, as I’ve recently rewatched Thief, Manhunter, Miami Vice, and The Insider. I’m not going to try to rank Blackhat in Mann’s filmography, as I lack a PhD in Mann Studies, and it doesn’t really matter at the end of the day. Blackhat isn’t his worst movie or anything, but even if it was, I’d rather watch Michael Mann at his worst than countless other directors at their best.