Wildlife preservationist Hank lives harmoniously alongside a menagerie of untamed animals, including cheetahs, elephants, lions and tigers on a preservation in the African plains. When his wife and children arrive for a visit, a long-brewing battle for dominance between two lions erupts and threatens their very lives.

In 1981, a bunch of hippies got together and made a movie with like a hundred lions. By the end of it, people had broken bones, stitches, gangrene, and one dude even got scalped! Variety magazine named it, “most disaster-plagued film in the history of Hollywood.” You probably never heard of this movie because it was absolutely terrible, but since I own a cat, I figured this movie could gain me some insight into the wild feline psyche.

This is a story about a Busey-esque goofball who lives in a house with some motorbikes and a hundred deadly jungle cats. He has a family that he never sees. I’m sorry, he sees his family every day. The lions are his family.

He has a biological family full of humans whom he never ever sees. They are coming to visit him on the same day that the grant committee who funds his research is supposed to show up. What could go wrong?

I’m not sure if he’s a scientist or just a human yarn ball duped into living with lions so that the real scientists can observe him get eaten. It really doesn’t matter. Anyway…I wrote a bunch of stuff here and then erased it. Describing the plot of this movie was a new low, even for me. How about I just tell this story with screen shots and captions. Has that ever been done before in a review? Well, I’m going to try. What makes this movie so captivating is knowing that people were actually attacked and severely injured, so you never really know what’s real and what isn’t. Also, it’s great seeing the actors with genuine expressions of fear on their faces as they try and pretend everything is fine.

Here is the main guy getting mauled eight minutes into the movie after just describing how harmless the lions are.

“Honey I’m home… can I bandage myself up before you guys start eating me again?”

“Hey, I just reached into this lion’s pussy and look what I found! Can you guys keep funding me?!”

“No! Because your tiger just sunk our boat!”

“and double NO because now it’s killing this guy!”

“It’s so unfair they pulled my funding…. how am I supposed to buy bandages now?”

“Rub-a-dub-dub just me and my lions in the tub…. I just wish the committee didn’t get brutally attacked and pull all my funding. Oh well, Hakuna Matata!””

“Hey, before we go pick up my human family, you wanna watch me make love to my lionwife?” 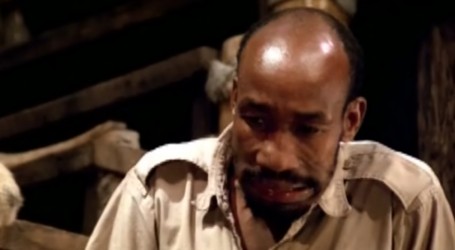 “Oh God I thought you were joking!”

“Thanks for letting me borrow your boat to pick up my human family. I’m sure nothing will go wrong!”

“That’s it! I’m taking this last boat out of the movie before you idiots sink this one too.”

“Well I’m just going to wreck this car now instead!”

“And this bike too!”

“That was my favorite bike you fucker. Now I’m going to eat your son. Look how stupid his face looks. I hate him. I hate him and his stupid face.”

“No seriously, he has the most punchable face in cinematic history. Gaze at this choad’s mug as he displays infinite expressions of terminal stupidity.”

Seriously, can someone throw this kid off a fucking roof?!

Oh yeah, some hunters showed up to kill the lions, but the lions ate them. That’s when the movie lost that Disney feel.

Nevermind, it’s back now because everybody hides from those playful lions to the tune of Yakety Sax.

Now a jaguar will lick honey off this lady’s face!

Let’s put her in a barrel and roll her down the stairs! HA HA HA Stupid lady!

After taking a nap with the lions, the family realizes they were never in any real danger

“Hey look, Dad’s home, and we are all very happy because we realized the lions love us and would never harm people!”

“Hey, don’t tell my family about those two hunter dudes who got ripped to pieces an hour ago, OK?”

“Hey, come live with us in this house forever. It’s totally safe.”

“Ok, we will! That sounds like a great idea! Nothing could ever go wrong!”