Mad Max, Mad Masculinity: What Fury Road has to say about manhood

Mad Max: Fury Road- What it Say about the Stupidity of the anti-feminist movement

Personally, I want to see the Hard R gritty reboot of Wacky Racers.

Is This Film Worth My Time? I’m not here to join the stampede of critical praise, though I will support that this is the best action film of 2015 so far, and one of the best of the decade.

There’s a story that there was a member of the KKK who left the organization one day after watching his children play, and seeing that they were playing with Superman as the good guy beating up the KKK. In a similar way, for those still clinging to r/theredpill and the rest, its time to give up. Archaeo-misogynist blogThe Return of Kings, even without seeing the film, has decided to warn all men against seeing this feminist propaganda. If you don’t consider Mad Max to be manly, then you don’t understand what manliness is.

And interestingly enough, that’s what Fury Road is all about. 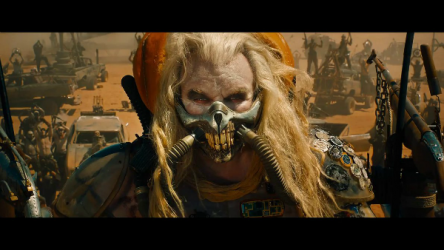 Here’s the main villain: Immortan Joe (played by Hugh Keays-Byrne), ruler of Citadel, leader of the War Boys. He controls the major fresh water supplies and food from atop his mesa. Joe leads an alliance with The Bullet Farmer (Richard Carter), who controls the gun smiths, and the People Eater (John Howard), who runs Gas Town. 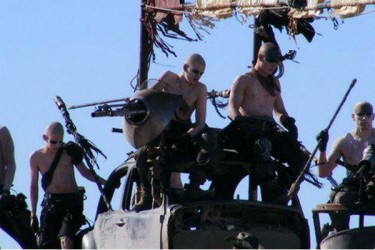 These are Immortan’s War Boys. They’re a bunch of paint huffing teenagers, raised up to seek the glory of Valhalla. They spend their days working on customizing cars, re-enacting 1990s mosh pits, and generally being as extreme as possible. 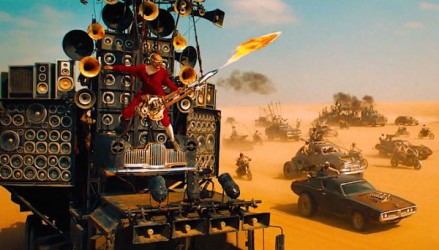 Immortan’s empire, in many ways, is really inefficient, and Mr. Flamethrower Guitar is exhibit A. That guy is being carried around in a high capacity military 20 ton truck. If you wanted to build a war rig, that truck would be top choice. It is stupendous to think of how much electricity (and gasoline) Immortan is spending just to keep his troops supplied with continuous heavy metal solos. But all those Warped Tour peripherals serves a purpose. That purpose is to keep his adolescent soldiers in a perpetual froth of unquestioning enthusiasm.

Like a bunch of beta chimpanzees in a war troupe, they’re whooping it up, throwing poop at each other, and beating their chests, all while Joe collects the profits and buries the occasional young man who wasn’t lucky enough to dodge the bullets from Joe’s enemy of the week.

Let me introduce you to the character with the major character arc: 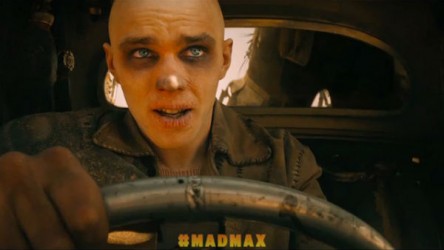 George Miller’s harrowing vision of a future devoid of chapstick.

This is Nux. He starts out as just another war boy, carrying around Max as a blood donor, chasing after girls in a souped up VW Beetle. It’s Nux who develops as a person, who learns to make decisions, who actually has drama. And he proves to be just as important to the heroes as Max (Tom Hardy) and Imperator Furiosa (Charlize Theron).

George Miller has made the perfect critique of modern capitalist ersatz masculinity- the posturing, bellowing, more extreme than thou circus of atrocity that is foisted off as being an expression of gender. The cult of dulce et decorum est pro patria mori, the displacement of youth into thanatic posturing, the shunting of gender into emblems (cars, slave girls, guns, masks) and fighting. Masculinity has been marketed and commodified ever since the first baldness tonics and army recruiters, but it was perfected, elevated, into a science in the cold war. Whether your icon is Don Draper or the World of Gor, it’s possible to just live in a hermit crab shell of accumulated products that signify an iconology of manliness, whether that product is a Humvee modified to roll coal, or a complete 4000 Point Space Marine army. We don’t just have one sweeping, entrancing mirage of masculine realization to delude the marks; we have a catalog, a vast archive, with a dozen new models rolling onto the sales floor every year.

Each of the major villains is part of a classic establishment triptych. Immortan Joe, with his medals, his talk of glory, and his armor, is the general, the military. The Bullet Farmer, with his preaching and ranting, is a religious figure, an old testament judge, a blending of Dominionist Christianity and the NRA. And The People Eater, lord of Gas Town, is a fat, greedy, pig-snouted merchant baron. In other words, its the same triumvirate fucking up the future as it was fucking up the past and the present.

Fury Road is about learning to see past the false iconology of commercial patriarchal masculinity, and learning that real manhood begins when you begin defining masculinity by your terms rather than by the terms that others indoctrinate to you. One of my favorite aphorisms is that a real man is not afraid to be seen drinking a froufy girly drink at the bar.

Don’t fall for the trap of the polarizers, the extremifiers, whether they are Immortan Joe, or Aaron Clarey, or Abu Al-Baghdadi. Ideologies and faiths and philosophical principals are not games, and the only badge you get for being the most extreme is one that proclaims that you are an asshat to the rest of the world. Don’t confuse the shadows of the absolute for the reality of the concept which casts the shadows. 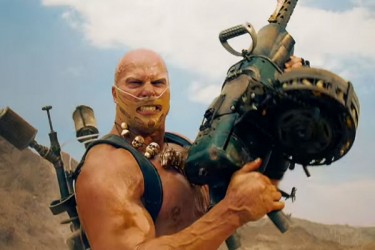 Mad Max doesn’t need a gigantic scary name. He doesn’t need a Mohawk haircut, or a car festooned with spikes, or chainsaws or piercings. He survives, he gets what he needs, and sometimes he even manages to make a difference. Max is so confident that he doesn’t need to be in charge, he doesn’t need to be the big man. In fact, much of why people call Max Mad is because he is the one that walks away from being the big man. The Main Force Patrol wants him to lead the precinct. Pappagallo wants Max to lead his people. The Children want Max to lead them beyond Thunderdome. It is his anti-social individualism, in a world where society is at a premium, that causes others to call Max the Mad One. But that’s not madness. That’s a supremely self-aware and confident individual.

Fury Road is not a feminist film. It’s a rationalist, humanist film- a film in which the forces of maturity ally in order to fight against the forces of insecurity and overcompensation. Immortan Joe is a juggalo, for crissakes, and he’s forcing everybody around him to adopt a dress code more suited to a Disturbed music video than to desert survival. Mad Max eventually gets backup in the form of a troop of wizened biker grannies. If you can’t see past female characters for the continuum of the film in the milieu of post-apocalyptic cinema, I can’t help you, not anymore than I can help the people who confuse Obama care for North Korean Marxism. 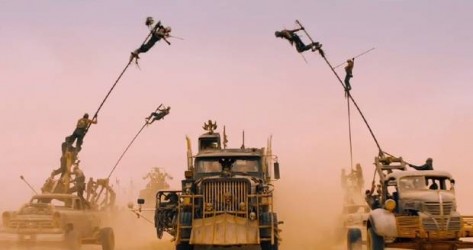 Who is this film perfect for? Anybody who likes fire tornadoes, car chases, steampunk cyborgs, gritty vigilantes, Australians, and action movies.

Who will not like this film? Men who are threatened by the presence of women who express opinions of their own.

What is the summary of this films concept? Mad Max gets hired to ride shotgun on a convoy of refugees.

How does this film compare to others like it? It’s the biggest, grimmest, most visually sweeping film of the series. It’s poetry written in sand, fire, and shrapnel.