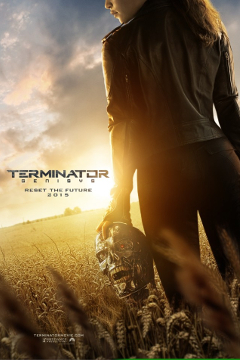 One of the greatest moments in the Terminator series occurs shortly into the first film. The naked T-800, played by Arnold Schwarzenegger, walks towards several street punks to ask for their clothes. If you watch closely (or freeze frame at just the right time), you can catch a glimpse of Arnold’s penis as it dances through the midnight shadows. It’s… it’s beautiful. 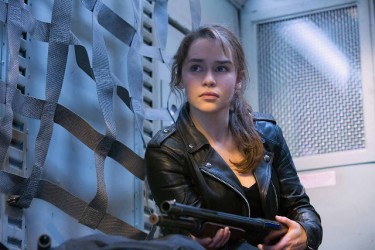 Now, in Terminator: Genisys, they re-enact this scene with a body double and a digitally-recreated “Young Arnold” face. However, they have a ginormous shadow cast over the crotch region. Somehow, they spent millions of dollars recreating this scene from the 1984 original, yet they forgot the most important part. How does this even happen?

Anyway, we don’t get to see Arnold Schwarzenegger’s penis in this movie. My, how our country has fallen.

Do I even need to write anything else? Oh, ok. Fine.

Terminator: Genisys is the latest attempt at making a Terminator movie without James Cameron. Why do they keep doing this? Well, the rights revert to Cameron in like five years, so they’ve got to try to grind out as many Terminator flicks as they can in the meantime. That’s Hollywood, guys! If you’re not raping something at least once every six hours, they deport you from Brentwood to Baldwin Park. That’s why all the studio execs keep flocks of chickens in their offices on battle-ready standby. It’s true. I read it on the Internet.

(Do chickens live in flocks? I have no idea.)

Amazingly enough, though, Terminator: Genisys was actually pretty entertaining. I mean, it’s not just a lame retread of T2 like T3 was, and it’s not boring as all hell like Salvation. It’s a trainwreck clusterfuck of a story, but the movie fully embraces its insanity. Maybe it’s just that I went to see this with my expectations at rock-bottom, but I didn’t feel like I completely wasted my time. It’s not the Future War sequel that I always wanted for a third Terminator movie as a kid, but it’s at least acceptable as a Terminator movie. Barely. Maybe. Sort of.

Yes, it’s PG-13. Yes, it has none of the grit, horror, or general badassery that defined Cameron’s entries in the series. Yes, everyone on the Internet seems to be tearing this one apart for being retarded and lame. Really, though, what were you expecting? It’s Terminator Kids without the awesome super-deformed characters from the Sega Saturn Virtua Fighter 2 remix. At no point did I expect something on-par with T1 or T2. I just wanted to laugh at all the ridiculousness.

There was certainly a lot to laugh at.

The opening of the movie is basically the ending of the Future War sequel that we always wanted, but Hollywood never saw fit to give us. As SkyNet falls, the T-800 is sent back to 1984 to take out Sarah Connor. Kyle Reese volunteers to go back to save her. Kyle Reese is super-buff in this movie for no reason, by the way. Where does he get the nutrition he needs to get that buff in the post-apocalyptic nuclear wasteland, anyway? I don’t know. Just go with it.

Back in 1984, it turns out that another T-800 was sent back to 1973 in order to protect Sarah Connor from an attempt on her life, apparently by a T-1000. Her parents were killed, and she has been raised by this T-800 for the past decade. There is also a T-1000 running about in 1984; I am unsure if this is meant to be the same one that killed Sarah’s parents or not. Does it really matter? Just go with it.

Anyway, as Kyle Reese is warping back in time, the timeline changes and shifts, and he now has memories of a life he never lived where Judgment Day didn’t happen in 1997. He remembers his younger self repeating a mantra: that “Genisys” is SkyNet, and that the new Judgment Day is in 2017. Later on, Sarah and Kyle use a time machine that the T-800 built to warp forward to 2017 and…

You see what I mean, guys? This movie is fucking insane. And I’ve only summarized the first half! Jesus Christ!

Later on, Helena Bonham Carter’s “Face of SkyNet” gets a shoutout with the new embodiment of SkyNet, played by Matt Smith from Doctor Who, a show I have still never watched. I’ll get right on that. Anyway, I have no idea why they felt the need to bring the Red Queen from the Resident Evil movies into Terminator, but here we are. Why does a malevolent computer AI need a human face, anyway? I can still remember Durandal’s classic lines from the Marathon games, and he existed only as text on the in-game terminal screens! Do they think that we’re idiots or something?

Overall, though, this movie does at least have a few decent ideas. It doesn’t quite fit together as nicely as one would like, but I do feel that it provides an interesting take on the Terminator story line. Terminator 1 posited that time travel created a closed loop of sorts, where the past could not be changed because the time travel was always a part of it. Terminator 2 provided an alternative to that idea, where one’s actions in the present could affect the future. They stopped Judgment Day in T2, and really, that’s where the series ends. That’s probably why James Cameron never bothered with a full-on sequel himself. We’re done here, folks. It’s time to move on!

Since Hollywood couldn’t move on, though, we got Terminator 3. That film added a third take on time travel, where actions in the past could affect the future, but major events in the time stream could not be completely eradicated. The timeline would revert to something closer to the original eventually; Judgment Day could be delayed, but it must always happen someday. On a long enough timescale, fate still ruled us all.

Now, we have Terminator: Genisys, which seems to have the timeline constantly being rewritten through all the endless warping about in the other movies. Genisys is the end result of putting every idea from previous Terminator movies, video games, TV shows, and comic books into a blender and just seeing what happens. Sure, they could have just used the money they spent on this and Salvation to fund another 10 seasons of The Sarah Connor Chronicles and made everyone happy, but this is America. We can’t have nice things. Hell, even Arnold’s T-800 notes that he was laid off from his job as a construction worker at CyberDyne some time between 1984 and 2017. The news keeps talking about robots taking all of our jobs, but apparently even robots can be laid off! Christ, guys. What does American business want?

So this movie is just a big meta-commentary on modern Hollywood’s obsession with remaking and remixing every god damned movie ever made. The movie itself is remade as we watch it due to the shifting timeline. At the end of it all, there’s nothing left to believe in. There’s nothing left to think. I’m not even sure if I actually enjoyed the movie. They could have sent a Terminator back in time to kill some guy in Santa Fe while I was watching it, and then the butterfly effect caused a neuron in my brain to not fire at a crucial moment or something. Honestly, I’m not sure if this movie even exists. Maybe the timeline is all different now. Maybe humanity was assimilated by the Lizardmen 10,000 years ago and I’m the only human left. I’m a relic of a dead timeline surrounded by alien gods. Maybe, guys. Maybe! You never know!

Anyway, I’m not sure if this movie had John Connor turned into a Terminator who warped back in time to 2014 and worked with Miles Dyson and his son to create a time machine and a re-branded SkyNet to kick off Judgment Day 20 years later than the first time. I’m not sure if that happened. Who knows? How do you know that you’re even reading this review right now? What if a T-Rex is actually reading this review, and you are the T-Rex? What if you are a T-Rex that thinks that you’re human? What if you are a human that thinks that you are a T-Rex? Far out, man.

If you think this review sucks, don’t worry. I’m going to go back in time and rewrite it so that it’s amazing. I mean, I tried to write a Jurassic World review a few weeks ago, but all I was able to write was “This was one dumbass movie”. At least this review has some content!

In conclusion, I got to hear Arnold talk about “mating”, and I got to watch the Khaleesi fuck some shit up. Whatever, Hollywood. At least chickens throughout L.A. County breathed a sigh of relief at the release of this film. They were given a brief respite, if only for six hours. It’s the small victories, though, that make all the difference.