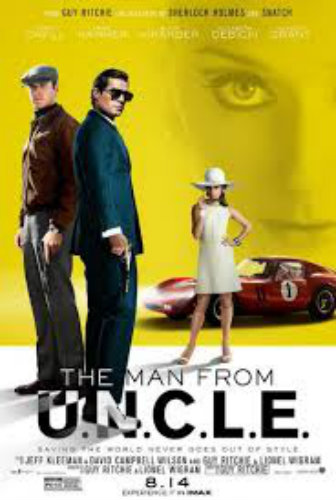 It has been a while since I’ve been excited about a new movie, but the other day I saw one that was pretty slick and very watchable. The Man From U.N.C.L.E is a delightful 60’s time period movie from the great Guy Ritchie. Yep, he’s the guy that did Snatch, Lock, Stock, and Two Smoking Barrels, and the Sherlock I & II so you cannot be surprised that it was so good. The Man From U.N.C.L.E. is a Spy Thriller for adults in a PG-13 package. 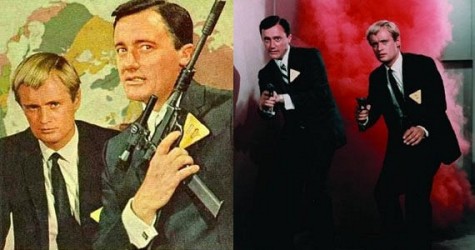 There have been several Spy Movies this year, and most reviewers will relegate U.N.C.L.E. to the bottom of the heap, but that is not how I see it. OK, the plot was simple and pedestrian and the movie pacing was slow for this type of action movie, but I thought that the pacing was near perfect. This movie will be criticized from two directions, for not being U.N.C.L.E. enough and for for being too PG-13 tame, and this is unfortunate, but I think that the body of work exceeded my expectations. Let’s face it, no one under the age of 55 remembers the TV version of The Man From U.N.C.L.E., so it was pointless to invest a lot in making connections that few would remember. As far as being too tame, this criticism is valid except for the fact that Ritchie’s methods and style just worked. The story line was a simple Cold War era one, with who had the bomb, where was the bomb, and how could Solo, Illya and Gaby team up to try to prevent a mysterious organization from obtaining this nuclear device. Then, of course, there were Nazis. 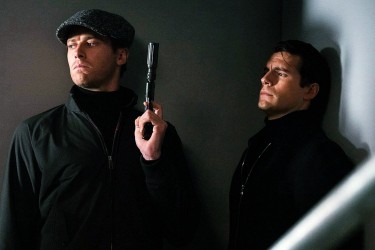 Lets just start with the acting of Henry Cavill, whose performance in U.N.C.L.E did not resemble the wooden one in Man of Steel. Guy Ritchie uses Henry Cavill as Solo to perfectly snipe at and ridicule the stereotypes and tropes of every spy movie that we watch. With the big Russian, played by the gorgeous and dangerous Armie Hammer, as a darkly simmering and dangerous straight man, Solo and Illya perform a slick and hilarious ballet during this dazzling film. This mismatched pair, combined with the magic of Ritchie and writing of Lionel Wigram make for a great and highly entertaining film. Solo was the over the top debonair thief, James Bond, Cary Grant and The Pink Panther, all rolled into one. He was almost too good, too slick and too handsome, but it all worked for this refreshing summer spy fest.

Not since My Cousin Vinny had a female auto mechanic been so competent and so sexy, but Alicia Vikander passionately played the role of Gaby to near perfection and consistently turned the giant Russian into a stuttering lummox. Elizabeth Debicki was the 6’2″ venomous villain who just oozed sexuality and danger. Victoria stole the show with her stunning ruthlessness, and no one, not even the uber-cool Solo could resist her deadly charms. 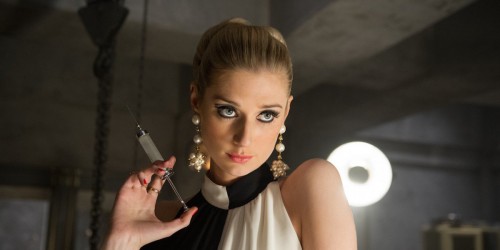 There were many great scenes and I especially liked the use of the multiple split screen to both move the story along and to play homage to the original hit TV series. No one scene displayed the skill and unique style of Guy Ritchie as did the Mengelesqe torture scene. Let’s be honest here. Nothing is more hilarious than German Nazi torture and medical experimentation, especially when the tables are turned. The Nazis have been exploited for decades by the cinema, I mean just look at Inglorious Basterds, for example. Anyway, the cut when the tables were turned was brilliant editing and the subsequent scene outside the chamber where Solo and Illya were nonchalantly having a conversation was hilarious, and the best scene in the movie.

HOMOEROTICISM- Where to begin? Never has a recent movie been so rich with its implied lust, and never has such lust been so cloaked and hidden within a Savile Row suit. In the opening chase scene Solo was so love-struck with the big, blonde Russian beast that he could not even shoot him, he just gawked in awe. To the very end, it was love at first and every sight as Solo even risked his life to give Illya back his coveted watch. In the fight scene in the glorious Green Latrine, after Dolph…I mean Illya, beat Solo senseless, they sat on the floor and hugged for like 5 minutes in a loving embrace. Throughout the movie, Solo was going out of his way to impress his honey hunk and even deserted an Italian sandwich and bottle of Chianti to save his drowning lover. Check out the one liners and quotes below, do straight men say things like “I’ll take the top…I’ll take the bottom”? -or- “Take it like a pussy”? I don’t think so. The women were mostly ignored and Illya totally resisted Gaby even after a seething, dancing, then erotically violent come-on, always being faithful to his man. What was Solo’s and Illya’s biggest bitch fight about? Ladies’ fashion! I cannot make this stuff up. It was disappointing that Solo banged the front desk chick, clearly to keep up appearances, and his night with Victoria was strictly business and of course, she died horribly later in the film. Ladies, I’m sorry, and never since Butch Cassidy and the Sundance Kid has there been a more gorgeous leading couple, and these guys were in love all right, but with each other. 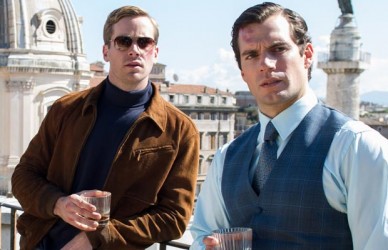 The Man From U.N.C.L.E. was a great surprise and Guy Ritchie did not disappoint. From the beginning chase scene until the slick and beautiful end credits rolled, I was hooked, and the musical score written by Peppino Gagliardi was that steamy, sexy jazz that was perfect for a spy movie.