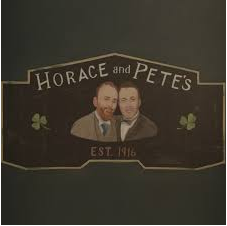 I thought True Detective might hold the title for Bleakest Television Show Ever. Notorious for themes concerning crimes against children and Woody Harrelson’s updated version of the George C. Scott meltdown while watching, lets just say, very sick pornography, in Hardcore, it certainly left one feeling effectively shitty after every single episode. But it still felt like a made-up story. You could almost see the daily round table road mapping by an army of premium cable producers and writers throwing Matthew Mcconaughey’s fascinating but overwrought character, Rust Cohle, undercover into a motorcycle gang (where he almost certainly would have been killed), and terse, hand-wringing back and forth about what exactly to do with this near-mythical Yellow King guy. A great show, to be sure, but it was still glossed up and stylish and felt like, well, TV.

Horace and Pete is also very bleak, but it feels uncomfortably and at times horribly, real. Much has been made of the play-like, multi-camera shoot for each episode and you really do feel like you’re sitting in the gallery, on a red, velvet plush seat staring at a recently constructed wooden set, waiting for the actors to come in shouting from the wings. But beyond that, its not just not stylish, its anti-stylish. Ive always pined for a show that was just like, fat people and actors with rivets of skin tags wrapping around their necks, or their makeup is all fucked up, thick, ugly eyebrows. And I always thought it’d be funny and real if it took place in say, a fast food restaurant and we watched them struggle with making it on $200 a week, fighting and fucking, smoking dope, but this will do too. Granted, there are well-paid, Hollywood established big names patronizing Horace and Pete’s place, both in front of and behind the bar, but man, there ain’t a whole lotta’ Hollywood glamour.

When this show was recommended to me, a quick glance at the cast list assured literally anyone that they were in for a laugh riot. Louis C.K., Steven Wright, Nick DiPaolo, Kurt Metzger, the usually affable Alan Alda. Even Steve Buscemi I figured, with this crew, would be the Buscemi of Lebowski, or that magician movie with Steve Carell or hell, even the high strung bassist from Airheads. No, sir. While there are obviously a wealth of hilarious jokes and drunk logic stories, especially from the terrific Metzger, they start to dissipate more and more mid-season as the show metamorphoses into a hard drama that I predict now will make a huge splash come awards season. 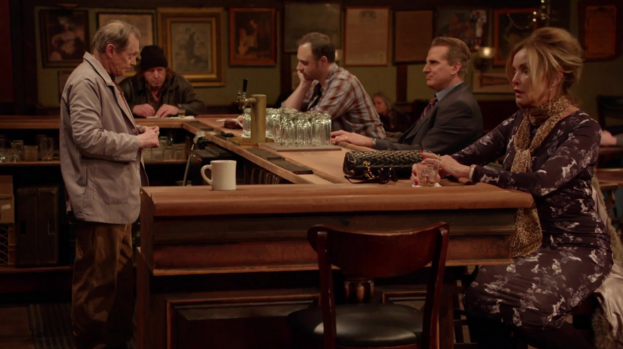 Because at the heart of it all, and its one sticky, smelly, black heart, is a family so dysfunctional, it makes all those gangster husband, wife, and kid combinations on The Sopranos look like the Waltons. A hackneyed comparison, but true. I can only think of one type of family that would be any more disconsolate and wretched than this clan and that would be one marred by the horrors and long lasting trauma of incest and child molestation. For a minute there, I thought Louis C.K. might actually be going down that road and while bold and brave, even this show I dont think wants to deal with that stuff. For 10 episodes while utilizing big name stars. And Paul Simon. Like I mentioned earlier, True Detective, and other shows, have certainly touched (I really want to use a different word there) on that subject but they didn’t stick with the victims for any sustained period of time. Certainly not with probing (shit!) character studies over the course of 8-10 hours of programming.

But, the misery these now adult family members have gone through their entire lives, emotionally abused, controlled, and beaten at times by the original Horace and Petes the dads, and their dads before them is nothing to sneeze at. It informs everything about the personalities and insecurities we are now seeing onscreen. Louis C.K.s Horace is a wuss. He cant make a decision, he rarely defends his own honor, let alone anyone else’s. Buscemi’s Pete is an agonizingly tragic case. A man who has struggled with severe schizophrenia and bouts of psychosis for decades, with no support from his father or mother, at any time ever, and only some shaky support from his grown up siblings. Who at times are so fucked up and neurotic and resentful themselves, that they momentarily and spontaneously deep six the support and attack him, mocking his mental illness, even in front of a new, promising love interest. 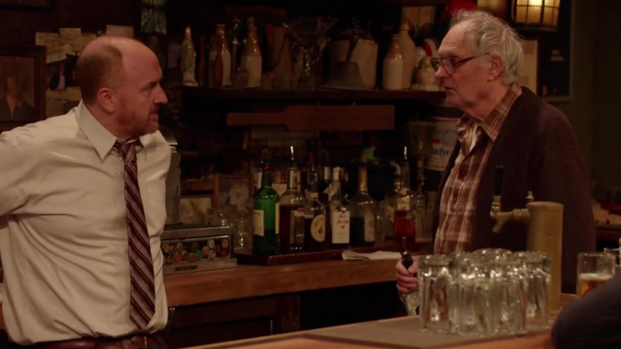 There is a scene near the end of episode 9, I guess that could sort of be characterized as a dream sequence and I FUCKING HATE dream sequences (see The Sopranos) but its like, a next level dream sequence. And its goddam chilling. Pete is off his meds (by no choice of his own) and in the throes of a neurotic, schizophrenic breakdown that were not sure hes going to come out of. And through a few comments and clues, we are under the assumption he is hallucinating. Not dreaming, per se, but actually awake and possibly lying on a park bench or in a ditch or behind a dumpster, and we are given VIP, through-the-kitchen access into what it very well must be like inside the head of a person with stage 5 mental illness. And the most painful part of it all is that in the next episode we see all kinds of missed opportunities that could have prevented this poor mans decades long suffering. But instead, Horace II beats the hell out of him for burgeoning OCD. The 10 minute Inception like thing that’s going on with Buscemi’s Pete, in which he talks to Alda’s Uncle Pete, another irredeemable, bigoted creature is a truly powerful sequence and blows away all those annoying, interpretive dream vision bullshit scenes we suffer through in virtually every dramatic TV show at one time or another (again, I’m looking right at you, David Chase).

I think you have to pay like $3 an episode for this show – I mean I don’t know if Its changed since I watched it, but that was the going rate when I did. Itll likely come out on DVD and then you can save a few bucks, but I guess if you want to spend that money now (that you fucking know is gonna go to stupid shit anyway like a sack of weed or an Under Armour T-shirt) you would be doing C.K. a solid, honoring a superb, ground breaking effort and it’d be kind of like buying the hardcover version of a terrific book before it goes paperback or hits the public library, where other patrons will use it as a coaster.

One last note, and I don’t know this for sure but I have to think Amy Sedari’s character, right before tragedy strikes, was sent in as not comic relief necessarily but just hopefulness relief. Like, give the audience some 2 minute wet dream (almost literally because she is so infectious and alluring right then) within a dozen freaking nightmarish hours. She came in like a force of nature too Ive never understood what warm fuzzies are and certainly am a goddam fruitcake for uttering the word in public, in a documented, internet-imprinted review, but, that’s what she gave off. To me. And I think to one of our main characters. Right before his sad, aching, chanceless life culminated into one final, tragic, probably relieving event.