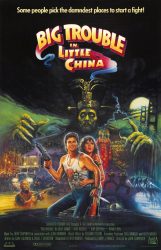 They told Jack Burton to go to hell…and that’s exactly where he’s going!

They need girl(s), and the truck. Fuck Chinese Magic! 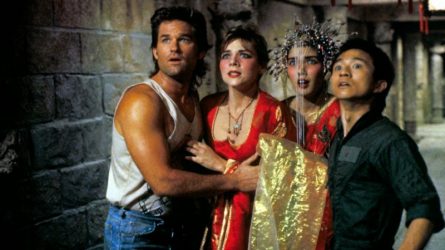 None. Oh, boy, we need to talk. O.K., there was a weak attempt at redemption at the end when Jack didn’t even kiss his green-eyed girl goodbye, but by then all hope was lost. It’s complicated and confusing as we had an 80s action duo that usually meant love at first sight, but it just didn’t work. As with all 80’s Action Movies, this was the most important category and will be the bulk of the review. Big Trouble in Little China was a miserable box-office failure for Carpenter, but is now a cult classic.

See the picture below? Kurt Russell was a ripped hunk in a wife-beater, so what went wrong? One thing is that in 1986 America might not have been ready for the American/Asian superhero duo. Russell certainly had the swagger, but he was a klutz at times and his counterpart did most of the load of the fighting. Jack and Wang (great name, however) just didn’t have that Schwarzenegger & Weathers lust that other, more conventional 80s Action movies carried.

Ultimately, however, the homoeroticism in this film was extinguished by the penis-withering heterosexual presence of the two green-eyed ladies. Instead of being bedded (or not) immediately and killed off quickly, these two women, in spite of being objectified, were put on a pedestal. Hell, even the forbidden concept of marriage was the objective of the bad guys in the movie! Gracie was in the spotlight the entire movie and that spelled big trouble for the male on male lust that we all expect in this type of action film.

Contrast Big Trouble in Little China and the female actresses with a movie like Predator. In Predator Anna (Elpidia Carrillio) was uncharacteristically in the entire movie, but was wet, bloody, muddy, kept her mouth shut, and it was suggested that she be led around on a leash! HELL YES! Again refer to the picture below. That was not blood, that was lipstick from Jack kissing Gracie late in the movie. Unacceptable! 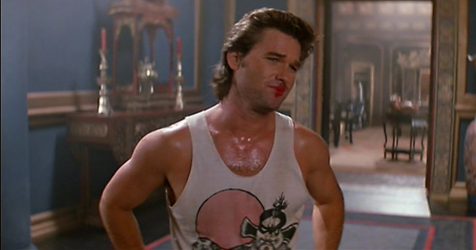 While we were disappointed in the homoeroticism, Big China does give us non-stop action and death. Around 90 for the body count, nicely paced throughout the movie.

There were many, but it is hard to overlook the obvious, one of the greatest 80s action deaths ever. After a great novelty death where Jack catches and throws a knife into Lo Pan’s head (“It’s all in the reflexes”), Thunder inflates himself to a ridiculous and comical caricature and then blows up gloriously. 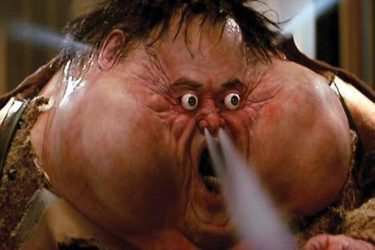 As far as the reception from the professional critics and the box office, it was terrible. In reality tho, this is one of the greatest movies ever made. I mean, Kurt Russell! The action was non-stop, the script and dialogue was perfect for 80s Action and the sets were gorgeous. Big Trouble in Little China was a film that combined the genres of Comedy, Action, Thriller, Sci-Fi, Kung-Fu, Anime, Magic and Fantasy perfectly.

The sets, costumes and attention to detail were the best you will ever see in a cheesy 80s Action flick with more quality one-liners than you can possibly imagine. I mean, this movie is so bad that there is a reboot in the works starring none other than The Rock. What does that tell you…well, other than the remake will undoubtedly be blasphemy and suck.

Kurt Russell nailed his part as only Kurt Russell could. He perfectly combined his bullshit swagger with inept clumsiness as so clearly demonstrated in a key scene where he actually knocked himself out before the big fight, solely due to his own shenanigans. Jack Burton was the loyal buddy that we all longed to have, but we knew that he would eventually land us both in jail…or worse. His redneck “Bro” logic was perfect and you knew you would be going for a ride down a dangerous one-way street, but it doesn’t matter because…”It’s all in the reflexes”.

No. There was absolutely no law-enforcement presence in this movie at all, except for the getaway scene at the end, but there was an unnecessary and annoying attorney in the opening scene. 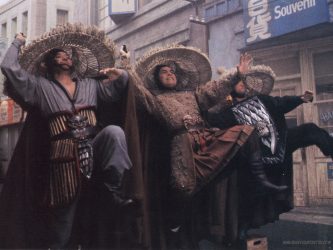 No, but there was something that looked like it had survived Three Mile Island hiding in Jack’s truck.

John Carpenter is probably one of the most under-rated and underappreciated Directors ever. 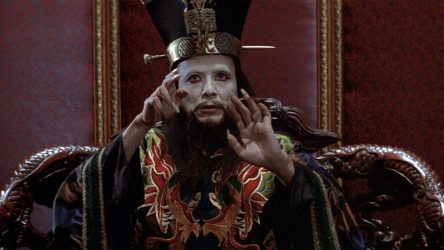