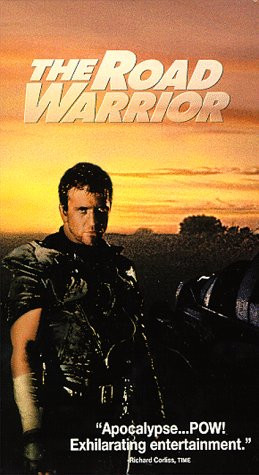 In a dystopian, post-apocalyptic world, they don’t need the girl, and nothing escapes.

The Road Warrior (1981). I have no explanation as to why this movie is not in the Ruthless Reviews Movie Archive. Jonny or Matt probably reviewed it and it just somehow didn’t make it over in the 2006 reboot of the site. No matter, a movie of this importance I must review, and of course in the 80’s Action Format. 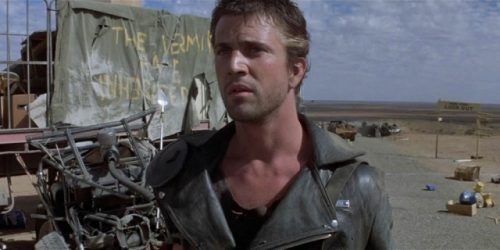 Two words: Vernon Wells. Two more words: ass-less chaps. All of the bad guys, regardless of their sexual persuasion, dressed up like they were attending a Gay Bondage Convention. Wez did not need the girl, even a beautiful blonde who was ultimately raped and killed, as he preferred his boy-toy who rode on the back of his machine. When the Feral Kid killed his homeboy, Wez was so distraught that he had to be restrained the rest of the movie by a choke chain. Humongous was ripped, dressed like an executioner in a Gay BDSM Dungeon and was almost totally naked the entire movie. Except for two brief scenes (the rape and the tent uncovering), there was not much man on woman action. Why mince words? This movie was gay as hell, but I’m not complaining.

Two died in the tractor-trailer on the highway in the initial scene. Two died trying to escape the compound and the girl was raped. The rapist was killed by Max. During the wonderful confrontation between Humongous and the Dwellers at the compound, Wez’s Blonde Gay Lover was killed by a boomerang to the head by the Feral Kid. At least 28 more were killed in the ensuing battle and the battle to get the tractor back to the compound.

They killed Toadie and his escort after Max crashed trying to escape the compound. And yeah, they killed the dog too. This movie was brutal. In the last battle car-tanker chase scene (which lasted a glorious 38 minutes), the carnage was too great to accurately count. I estimate that 50-75 people died, including Wez, Humongus, The Warrior Woman, Pappagallo, all of the fighters defending the tanker and most of the Bad Guys. It was the Grim Reaper’s hey-day. I am going to conservatively estimate 150 deaths, all of which were simply dazzling. The Road Warrior gets 10/10 for carnage and body count. 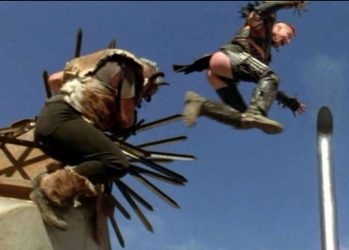 The Road Warrior really excelled here. The killing of Wez’s Gay Boy was great, but I have to give the best novelty death to where Max crashed the tanker head-on into Humongous with Wez chained to the front. Two birdies, one stone. It was magnificent.

As far as 80’s Action movies go, or for ANY movie that you are rating, one of the best action movies ever. The Road Warrior is a splendid effort and a rocking great time. Not one frame was wasted, and when you consider that this was all done before CGI and other special effects, it’s a wonder that the entire crew was not killed. This film has aged magnificently and the attention to detail, editing, exquisite sets really stand out. Like I said, Masterpiece. (EDIT: And that musical score! Gouge out my ears for forgetting to mention it. Magnificent!)

No. There was absolutely no law enforcement presence at all. This is the law of the jungle, or law of the desert, snakes included.

The Road Warrior was all action and very few words. You had more of furtive and “Oh-Shit” looks than you had actual dialogue. This deficiency in no way took away from the movie. O.K., here’s a few. 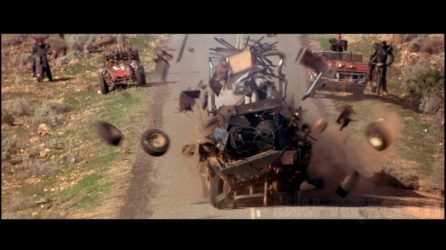 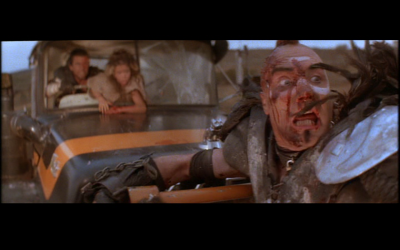 None at all. The world as we know it had already ended before the movie started. There was no PC, it was dog eat dog and the same went for Dinki-Di Meat and Vegetables. You just wait your turn.

No, but the ending vehicle chase scene was one of the best in the history of cinema. This includes Bullit, The French Connection, Baby Driver, Fury Road, Blues Brothers, everything. The Road Warrior really has no peer for road chases. Just watch it.

Special Ruthless Ratings -or- What I learned from The Road Warrior