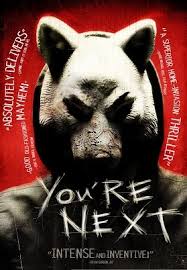 A wedding anniversary turns into a brutal attack and one victim fights back.

Yes! It is very well made.

Should anyone see this film?

If you are into cut above average horror, yes!

Did you, Jaimes Palacio, personally enjoy it? 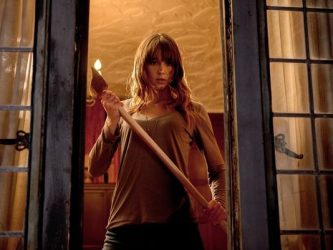 Here is the thing. I don’t get scared film wise. I get angry. So it’s tough to say I actually enjoyed the film. I respected it’s clever subversion of the cliches in home invasion or slasher films. But as soon as the killings started, I DID get angry and I devised all sorts of actions in my head that the characters didn’t take.

Yet, I know in real life, especially under the circumstances, the myriad of effective twists would have made any action I took (I realized later) null and void. Because, without giving too much away, the game had secret aces up it’s conniving little sleeve.

But, as I noted, the film is well made. It also has a better than average script which has the unmitigated gall to actually flesh out, somewhat, the characters before throwing them at furious crossbows, machetes, axes, and blenders. Yes. Blenders. (best line in the movie, said matter of fact with a touch of weariness:”I stuffed your brother’s head in a blender.”) 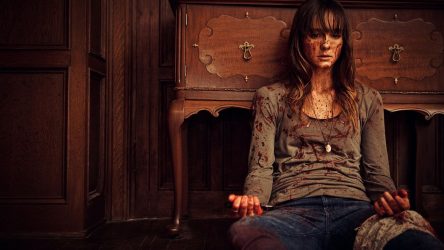 The movie begins with a chilling, but gore free prelude, which ends up with two people dead and a window with a scrawled, bloody “You’re Next.” We don’t find out till later what the significance of that scrawl is. In the meantime, the movie swerves into INTERIORS mode with a couple celebrating their 50th Anniversary with their kids and significant others. During the dinner party they are attacked and one by one they fall prey to the “single survivor” prerequisite of seemingly every slasher (and SCI-FI CHANNEL) movie ever produced.

Yet, even so, the usual cliches are thwarted. The people are more real, both in appearance (no nubile youngsters here) and in actions. Even the killers are more real. Not just unstoppable machines. They wear creepy masks but when stabbed, they cuss, they moan, they bleed. The violence is brutal, but quick at first. As the movie progresses each violent act gets bloodier and more gruesome, but not gratuitously so. This is no TEXAS CHAINSAW, FRIDAY THE 13th or HOSTEL gore fest. 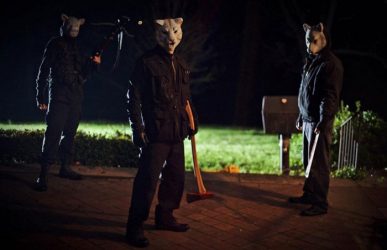 In the final act, the movie swerves again and it becomes a sort of DIE HARD:HOME INVASION! or maybe HOME ALONE 4:THERE WILL BE BLOOD! It’s protagonist and hero is truly kick ass and could give Bruce Willis a run for his money. The final two twists are a little disappointing, but I suppose inevitable. (and gives rise to the old adage, “Never a cop when you need one, always a cop when you don’t.”

In the end this is a tight, taunt, tightrope of a movie with creepy atmospherics to spare. Most horror aficionados (if they don’t mind the lack of excessive gore, for the most part) will no doubt find it scary. Like I said, I just get angry, which prevents me from being truly scared.

In real life? Most likely I WOULD be scared…but also angry.