NEW YORK (RR) Based upon information gathered from highly credible and in no way biased informant, Ruthless Reviews has learned that all of the NFL protests were paid for by George Soros! Furthermore, it turns out that all of the players are overpaid neanderthals, and they spend all of the off-season listening to loud rap music, hating cops and impregnating innocent young girls. In related news, a study in Totally Real Medical Journal shows that Chronic Traumatic Encephalopathy is completely fake as well, and that those millionaire crybabies are just looking to soak the team owners for even more money even though all of the owners come from hardscrabble existences from which they clawed their way out of the gutter by their bootstraps. The same journal also finds that Papa Johns is really good for you.

UPDATE: Using a cutting-edge technological tool developed by a promising Mountain View, California company known as Google designed for use on the global system of interconnected computer networks that use the internet protocol suite, we were able to determine that certain of the claims made by our source were not entirely factual in nature. We regret the error.

Seriously, you Goddamn morons? As entertaining as the whole episode was, it would be Caddyshack to the power of Dr. Strangelove if it wasn’t so perfectly indicative of the idiocy inherent in the people dead-up determined to drive the country right off of the side of a cliff. Working off of a false narrative, they set out to combat the lies and deceipt (sic) of the liberal MSM by lying and deceiving people.

Sure, why not, they managed to destroy a community service organization with a 40-year track record with their bullshit, why stop them now? So they lied about Roy Moore forcing a 15-year-old into getting an abortion. Big deal. At the rate things are coming out about Roy Moore, hell probably be proven to have performed a bunch of abortions by the time they elect him to the senate. But seriously, you hire someone stupid enough to use her real name to do this? And shes dumb enough to start a Gofundme under that real name? Good Lord. 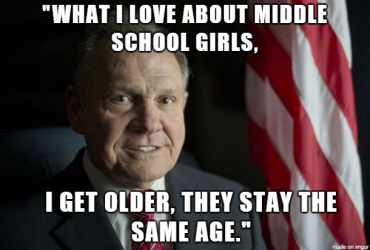 So did you survive Thanksgiving intact? Even if you hate the holiday, at least we got to enjoy wall-to-wall football, and for the last time until the meaningless bowl games pick up in mid-December. Until then, no more degen games on Thursdays, let alone Tuesday night MACtion.

The DirecTV sports tier occupies channels 600 to 698, with a lot of sub-channels and unused numbers in between. Knowing the Ruthless readership like I do, before you even ask let it be known that channel 666 is occupied by Fox Sports North HD. So boring, right? You would think that they would capitalize on the numerical symbol of Satan landing in the sports tier and put the Yankees YES Network there, but no dice *rimshot*. So the other day I was scrolling through college games and accidentally landed on 606, the Outdoor Channel, instead of 608, a Fox College Sports alternate. Lo and behold they were broadcasting a show called Whitetail Freaks and it was hosted by a woman named Kandi Kisky. It was not what I was expecting.

Nice weekend we had though, huh? I’m sure you’re aware of the policy around here by now. I don’t flagellate myself or make excuses for the bad weeks, and I won’t insult you by bragging about the good weeks either. It’s a game consisting of a thousand variables and this weeks genius is next weeks mark. That said, I foretold of the mouthwatering lines over the last weekend and put down a column record five picks, four of which hit. Thanks, Dallas. So I’m hoping you cashed in and bought yourself something shiny on Something Whateverday. You probably deserve it. Ever forward.

Chaos still reigns in the windy city. A lot of weird blind item stories came out of Halas Hall this week, accompanied by some curious personnel moves. Lucky for you, I have my special BTL spectacles that allow me to read between the lines, so here goes:

So let’s bet on them! No no no, hear me out. Yes, the Bears are playing hideous football, but the 49ers are somehow hideous-er. The line reflects this, though there has been a good deal of movement since Chicago opened as a 4.5-point favorite. The catalyst, you ask? Why its Jimmy Garoppolo, the Sicilian Slinger, the Papist with a Poised Pocket Presence, and the Dagone future of the 49er franchise. Apparently the ability to game-manage the best team in football to two wins whilst making sure that Tom Brady’s dry cleaning is completely devoid of starch is worth a point and a half on the sheet.

It remains to be seen where San Francisco decides to line up the answer to all of their prayers on defense. My first guess was nose tackle, since they rank 30th in the league against the rush, but he would be crushed by Bears centers Cody 25 is too young for this surname Whitehair and Hroniss I’m not typing with a stroke, its his real name Grasu. So perhaps he could be a DB, though he might go to waste amid the far-more-competent 26th-ranked pass defense.

Look, this is what it is. Nobody expects this to be a clinic or a sneak peek at the playoffs. However, this is the same Bears team that beat Pittsburgh and Carolina at Soldier Field. John Fox’s ouster is a virtual certainty at this point, but hell be motivated to stave off the inevitable until the end of the year as opposed to Sunday afternoon, which is rumored to be a possibility. Lay the *cough* favorite and leave the Red Zone Channel on, so you don’t actually have to watch.

Its a shame that rookie offensive tackle got waived and then parked on the Seahawks injured reserve list back in August. If you didn’t see him play at Mississippi State then you may have heard his name due to the useless triviality of being the only Canadian selected in the 2017 draft. However, given George Fant’s preseason ACL injury and the signing of Tyrus Thompson, it looked like Senior had a shot at some quality playing time despite being a rookie. Not that I’m particularly interested in his professional development, but given the trend of players naming their sons after themselves and adding suffixes to their nameplates, I was looking forward to seeing if he would go with SENIOR SR. as his NOB. Guess I’ll have to wait and see.

I saw most of the Seahawks v. 49ers game last Sunday afternoon since it involved us getting paid, up to and including center Daniel Kilgore spiking the ball after a buzzer TD, apparently overcome by the rush of emotions one experiences when they lose a game by 11 points. Russell Wilson was fine, but fine about covers it, going 20 of 34 for 228 yards despite a pick on the first play from from scrimmage. All told, Seattle scored 24 points and put up 318 yards of offense against the Mickey Mouse defense described supra.

Conversely, the Eagles Savage Mutilation Of Everybody Else 2017 Tour keeps right on rolling. If you want to play triangle theory, Philly beat the 49ers by 23 back on October 29, and since then they’ve posted margins of victory of 28, 28, and 29. They aren’t going to run the table, and I do think they will lose at some point before then regular season ends, but that will be in a slug-fest against the Rams or a trap game, maybe the Giants with an interim coach. This is not a trap game. Go Birds.

I’ve never been much for creeds but there are sharp bettors who wont bet against the Steelers in prime time, and you can’t argue with the results. Pittsburgh has won ten straight at night. Hell, if streaks are your thing, they’ve beaten the Bengals the last five times they’ve played and won their last five straight up as well. As per OddsShark, whose sim puts the final score at 28.1 to 15, the Bengals haven’t won this match-up at home since December 2014.

These days, Andy Dalton is to football what Jack Dalton is to football. ESPN’s advanced TQBR has him ranked at 25th in the league, ahead of only Jameis Winston, Flacco, and Trubisky in terms of name QBs (discounting injury replacements and no-better-option guys like Hoyer and Kizer). The worse Dalton plays, the more the Bengals are forced to rely upon Joe Right Hook Mixon. He is no match for the Steelers front four, who have collectively held teams to 96 on the ground and strip more often than a broke pin cushion at Burning Man.

I don’t want to get sideways with The Kid but Pittsburgh seems like a pretty safe play to me. Granted, they aren’t bulletproof and every once in awhile they either get complacent or over prepare, making them susceptible to losses against bad teams. Nothing else explains their two losses coming at the hands of the Bears and the Jags. That said, they barely squeezed past Brett Hundley’s Packers despite being a 14-point favorite, thanks to the freakish talents of Antonio Brown and a 53 yard field goal as time expired. I think that near miss should serve as their monthly blooper and thus the ship will stay righter until Christmas.

So there we stand. Start thinking of holiday gifts you want to buy for your loved ones. That way our hobby becomes something more than a selfish form of entertainment and your deity of choice will send a penalty or two in our direction. Maybe leave Roethlisberger’s name out of it too, just to be safe.