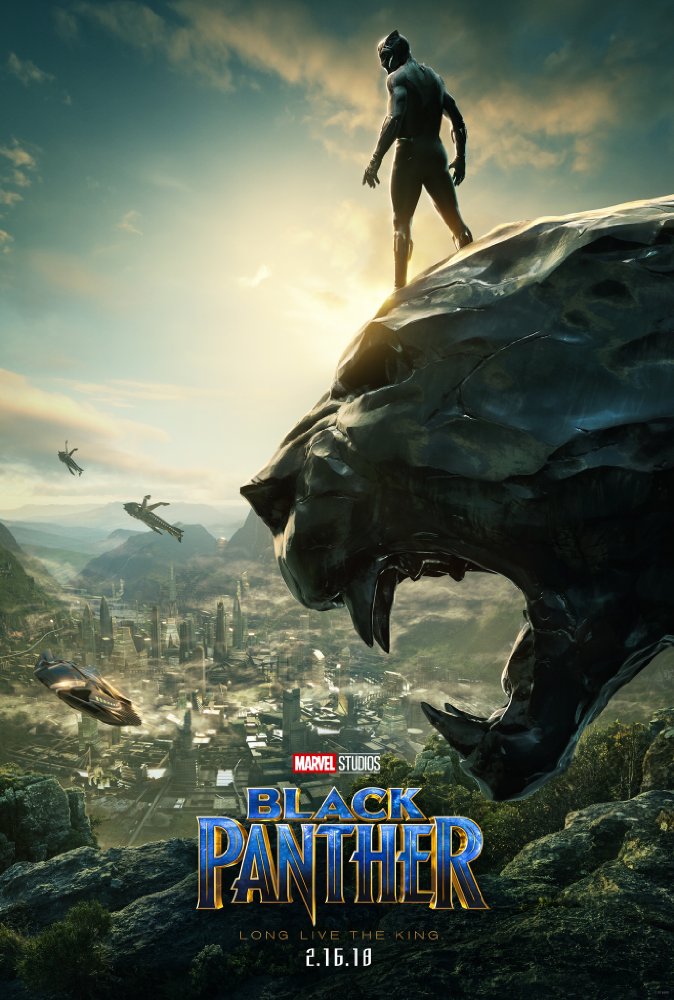 Black Panther battles vibranium smugglers and ghosts from the past.

You almost had it.

For the first 114 minutes of its 134-minute running time, Black Panther is a really good movie. Those 114 minutes are exactly what we’ve come to expect from a Marvel Studios movie – fun, witty, and visually excellent, with memorable characters you cannot wait to see more of in future movies. It even manages to tackle a couple of social issues without stepping on itself. So, what the hell was the last twenty minutes all about? It was like watching Hamilton, but getting hit in the face with a pie during the final act. Since the rest of the movie is good, you’ll forgive the pie, but not cool bro.

(SPOILERS – I am going to describe that pie.)

There is a lot to like in this movie, so that is where I am going to spend most of this review. The film begins with a quick back story of the fictional African country of Wakanda – a country filled with vibranium and magic herbs delivered by a meteor strike centuries ago. Using those two things, the Wakandans developed super-advanced technology, including imbuing their ruler with super powers (making that person the Black Panther), flying in anti-gravity, UFO-like aircraft, and healing all manner of disease and injury. It also begs the question “where were these jerks when aliens invaded the planet in The Avengers?” I’m guessing the Avengers would have appreciated the help, considering Wakandan technology makes Tony Stark’s tech look like he’s playing with Duplos.

That would have been helpful against the Chitauri. Or Ultron.

Incidentally, this refusal to help others or share their technology is the driving conflict between the main characters of the film. King T’Challa (Chadwick Boseman), his mother Ramonda (Angela Bassett), and wiseman/priest Zuri (Forest Whitaker) want to keep Wakanda’s secrets hidden from the world (like their civilization has always done), while special operative/former lover Nakia (Lupita Nyong’o), T’Challa’s best friend W’Kabi (Daniel Kaluuya), and the exiled Killmonger (Michael B. Jordan) want to reveal the hidden secret of Wakanda to the world and help people. Like in Captain America: Civil War, both sides make really good arguments, so it is tough to decide which side to root for. I mean, you’ll root for T’Challa because he’s the Black Panther, but you’ll question him while you’re doing it.

For most of the film, it feels like we’re watching a James Bond flick. T’Challa and a couple of warriors, Nakia and Okoye (Danai Gurira), embark on missions to stop people from smuggling vibranium out of the country. They are repeatedly seen inside a command area and they even have a gadget maker in T’Challa’s 16-year old sister, Shuri (Letitia Wright). When they learn of a museum heist involving an artifact that was actually vibranium, they determine the perpetrator is Ulysses Klaue (Andy Serkis). I know – I thought Klaue was dead too and this confused me for a while. Also, I think Serkis was ecstatic to play a character that didn’t involve motion-capture because he was visibly having as much fun in his role as Cate Blanchett had in Thor: Ragnarok. Anyway, they hatch a plan to catch Klaue by undercover to a casino where Klaue plans to sell the artifact to a CIA agent, Everett Ross (Martin Freeman). And, just in case you don’t think I’ve sold the case of this film being James Bond: Marvel Edition, they stage a car chase scene with a high-tech luxury car. The only thing missing was British accents.

While I was really into the spy-esque thriller feel of the film, I also couldn’t help marveling at a couple of the characters and the performances being delivered. As good as Boseman is in the title role, the sneaky good performances come from Serkis, Wright, and most especially, Gurira. Wright attacks her part with an earnestness that endears her to the audience immediately. Serkis revels in a villain role where we can actually see his face and invokes glimpses of Joker-level crazy/genius. But Gurira steals nearly every scene she is in, combining her tough-as-nails Walking Dead persona (Michonne) with a patient and wise advisor to create a character every bit as powerful and charismatic as Black Panther. Watching her admonish T’Challa as if he were nothing more than her pupil made me wonder who was the real leader of Wakanda.

So there I was, minding my own business and enjoying a really good movie when, out of nowhere, Klaue is unceremoniously replaced as the villain by Killmonger. Aside from the fact that Killmonger is a terrible villain name, his character is woefully underdeveloped. In fact, Killmonger is such a thin character that agent Ross (who is also laughably underdeveloped) is forced to monologue Killmonger’s backstory for the Wakandan leaders, as well as the audience. Turns out, Killmonger wants revenge for his father’s death and I lost interest in anything he did or said after that. Apparently, the writers also recognized this so, after about a five-minute digression where the movie becomes The Lion King, they wrote in a Lord of the Rings-style, epic, battle royale where Wakandans fight other Wakandans for no reason while dodging armored rhinos. *SPLAT!!*

Can you see me now?

What’s so frustrating about this climax is that the movie goes to great lengths to detail Wakandan culture and tradition, featuring the succession ceremonies and fierce loyalty, then tosses it out the window because rmored rhinos dammit! Plus, half of the Wakandan warriors decide to fight T’Challa after discovering he is still alive, meaning Killmonger isn’t technically isn’t their king (after besting T’Challa earlier). Even if you enjoy such battles in your movies, the tonal shift in the film to get there was so jarring it felt like it came from a whole different movie. It was like watching a baseball manager bring in his worst relief pitcher when the starter was throwing a shutout.

Despite the uninspiring climax and dull (second) villain, the rest of the movie was so strong that I would still rank it in the top tier of the Marvel Cinematic Universe (Black Panther being the eighteenth film in the franchise). I’m very interested to see where they go from here with Wakanda, their technology, and Tony Stark realizing he isn’t the smartest person on the planet. I can’t wait to see how Okoye plays into the larger picture and no actor is more satisfying to watch than Boseman as Black Panther. In other words, Black Panther is well worth watching and a great final lead-in to Avengers: Infinity War. Mmmm…pie?

Rating: Don’t ask for any money back unless that pie ruined your shirt.