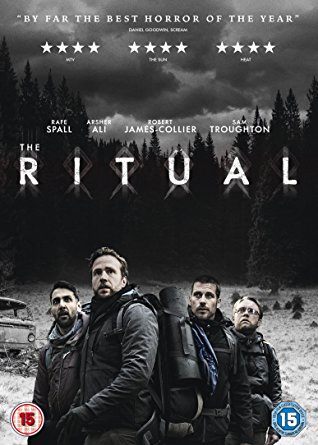 A bachelor party takes a menacing turn in the Scandinavian forest.

The Ritual (2017) I only get to watch horror movies by myself. This isn’t out of choice. It’s just that my girlfriend wants nothing to do with anything more terrifying than The Emperor’s New Groove. And in this day and age, you can’t casually phone a pal and ask them round to watch a horror movie together without it sounding like some quasi-homosexual proposition – because no self-respecting bastion of male chromosomes would ever voluntarily own up to being, in fact, an utterly contemptible wimp.

It is therefore always a solitary endeavor, and I’m a pathetically easy person to frighten even at the best of times. Thus, and despite David Bruckner’s The Ritual bringing nothing especially new to the table, this movie still reduced me to a feeble and blubbering wreck for much of the run time. 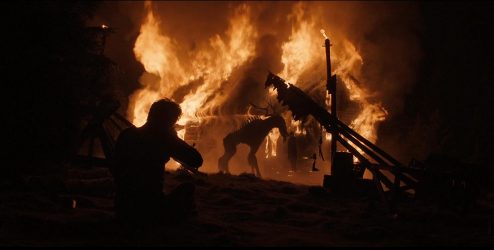 The story follows four British chaps who go on a stag-trip (bachelor party, for our American friends) – hiking across the hills of Northern Sweden. The Bachelor himself has in fact already died, necessarily precluding him from attending this particular trip. His pals go through with it anyway as part-catharsis, and part homage to their fallen friend. It’s an interesting concept not least because this type of horror movies usually begins with an exuberant gaggle of thoroughly stabbable teenagers who are high on life and a series of other stimulants. In this case, though, everyone’s a bit depressed and having a shit time even before things go off the deep end.

Inevitably, things do go awry. The Ritual warms up with overtones of witchcraft reminiscent of the Blair Witch if she showed a bit more leg – and escalates into a series of gruesome crescendos with a distinctlyWicker Man-ish feel. Not much original ground is broken, but what the film does, it does well. The British cast members are robustly believable in the strain of ‘four-pints-in-and-fancy-a-scrap’ aggression with which they face a rapidly deteriorating situation. By the end of the movie, any reasonable audience is left with little doubt that being lost in dark woods whilst being hunted by a horrifying creature bent on impaling anything he can get his hands on, is a far from optimal state of affairs. And, surely, that is the underlying message of this tale.

The movie is also great to look at, and makes much of the sweeping, brooding scenery of Sweden that so befits the slow-burn tension that underpins The Ritual. In addition to this and after thorough analysis, I can report that the pervasively crap weather in the movie is intended as a meteorological echo of our protagonists’ own equally crap situation, which gets progressively crapper until they definitely all wish they had stayed home in South London and ordered an Indian takeaway.

I went on a stag-do in the Swedish forest once. We spent a lot of the time drunk, cold and trying to learn from an exasperated tour guide how to light a fire with damp wood. I’ve never thought about it much, but having seen The Ritual I now feel we got off very lightly. Whether or not you’ve ever been inclined to venture into the northern reaches of Scandinavia, I’d recommend catching The Ritual on Netflix. It doesn’t smash any boundaries, but sometimes all you need from a movie is a couple of hours of decent fun (or – as I like to call it – solitary, craven whimpering). In this respect The Ritual most certainly delivers.