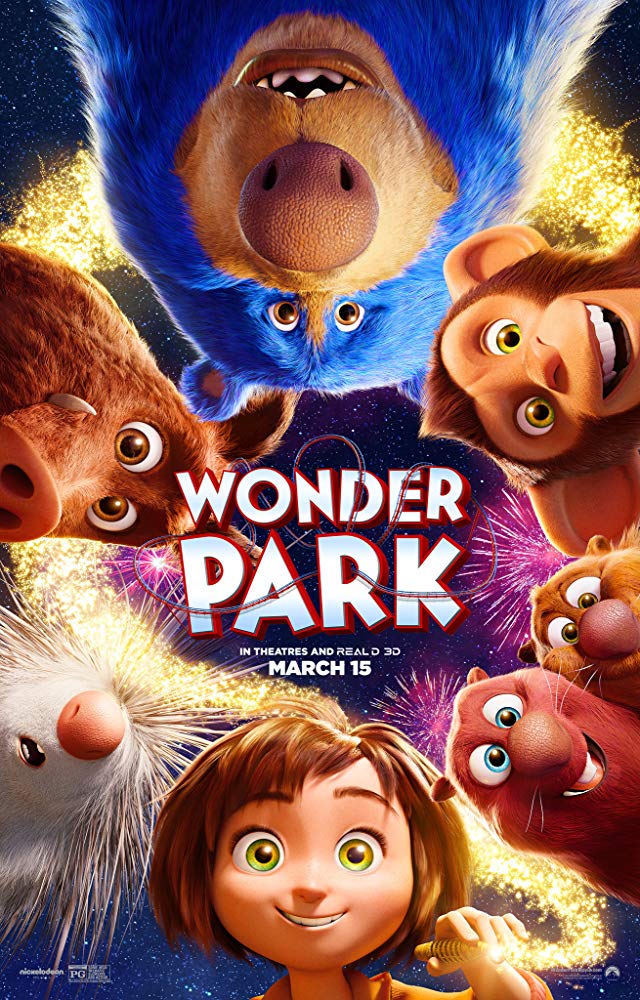 June and friends try to save their amusement park from cancer.

Only the best rides make you puke.

Based on the previews, I was expecting Wonder Park to be much worse than it ended up being. I am probably cutting it some slack due to my man/nerd crush on John Oliver, but it exceeded my expectations. More importantly, it kept my son’s attention, which is really the primary point of animated films. Yes, they should be well-written and rendered also, which is why Wonder Park isn’t even in the same universe as films like Spider-Man: Into the Spider-Verse. Wonder Park is decently written (at best) with fantastic visuals, but gets pretty lazy in parts. The worst offense – and this is unforgivable, even in a kid’s movie – is when the heroine sneaks away from her math camp group after staging a puking event on the bus. Wonder Park asks us to believe that the teachers at a math camp wouldn’t bother to count the children as they got back on the bus. No. NO! Now, I will let my son tell you about the rest of the film.

What movie are we talking about today?
Wonder Park.

Is this the most excited you have been for a movie?
No.

I thought you would be, because it’s an amusement park and you love Disneyworld.
I don’t love it. I like it.

What was Wonder Park about?
An abandoned amusement part.

So it’s abandoned; no one goes there?
No, because somebody did go to an amusement park. There are animals there.

What do the animals do?
Run for their lives!!!

What are they running from?
Chimpanzombies!!

Is that why the park is abandoned?
Yes.

Where did they come from?
The darkness. [starts singing] “…..hello, darkness, my old friend. I’ve come to talk with you again…helloooo…”

So the park is abandoned because chimpanzees came from the darkness?
ChimpanZOMBIES!!

Sorry, chimpanzombies. Does somebody come to save them from the zombies?
Yes, June.

Who’s June?
She invented the park. It came to life.

Did she build it with somebody else or was it her own idea?
She built it with her mom.

If the park is imaginary, if she invented it in her room, how does she GO to the park?
When they went on a field trip, and her friend puked in the bus, and then they all ran out in the forest. And June went out way far in the dark forest.

And that’s how she found it?
Yeah. Wonderland.

Did they have any rides at Wonderland?
Yeah.

What is their plan to save the animals and the amusement park?
Use a big spider thing.

Is that a ride at the park?
Yes.

It sounds awesome.
Yes, it’s horrifying! Also, they don’t have a measuring thing.

You mean the thing to measure how tall you are?
Yeah. They don’t have a height thing.

What animals were there?
A monkey. A bear – a BLUE bear. A porcupine. A warthog. A person. Chimpanzees.

You mean the chimpanzombies?
Yes!

Was that all of them?
No. And two squirrels.

As much wood as a huge roller coaster?
Yes. Then at least he has dinner.

Who was your favorite character in the movie?
The bear.

Why?
Because he was sleepy.

He was sleeping the whole time?
No, just sometimes.

What was your favorite part in the movie? You said right after the movie, that you needed time to think about it. Have you thought about it?
My favorite part is………the marker.

The marker? Tell me about the marker.
It can…make things. Like a bendy straw slide.

Well, that’s cool. Is that how they make all the rides – with the marker?
No…Yes!

How would you describe the movie to other kids?
I don’t know. I don’t know the description.

If Wonder Park was a real park, how much money would you pay to go there?
2 million!

And would you tell kids and parents that it’s a good movie to go see?
Yeah. I bet they’d like the park where the dad eats too much pizza and he blows the roof off the house. Remember that??

I do remember that.

You get 3 words to say about the movie. What are they?
Funny. Scary……Wonder.
Or, Wonder. Land. And Fun.

Rating: Worth two million cents and four dollars, which we confirmed with the math teachers on the bus.