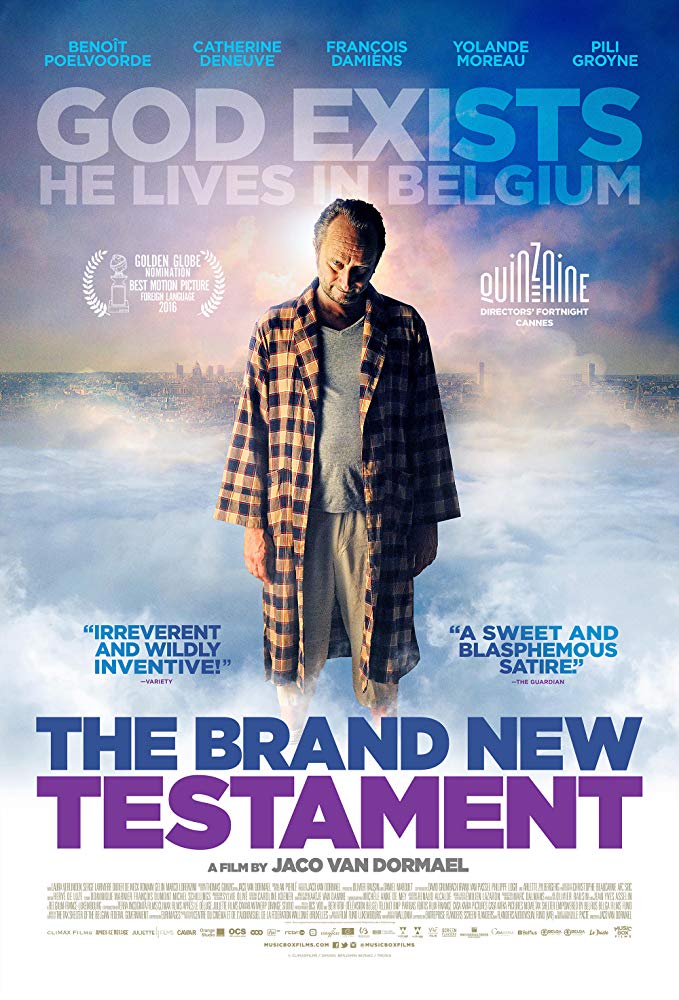 God is alive and lives in Brussels. He is a mean and vicious old coot, and his daughter decides to do something about it.


At Ruthless, all sacred cows are fair game for scrutiny, skepticism and yes, ridicule. From The ABC’s Of Evangelical Christians to awful Christian movies like Saving Christmas or The Case For Christ, we enjoy seeing religion torn down to the stump of stupidity that it is. Bold and satirical movies like The Life of Brian are infinitely watchable and quotable. The movie mother! violently and viciously exposes the rape of the planet by religious zealots, and The Magdalene Sisters shows the putrid cruelty and depravity of The Catholic Church. From The Breadwinner to Religulous, we love all of these great movies and rants.

Gods, Saviors, Holy Mothers, and religious rituals are easy to mock, but the movie The Brand New Testament does it in one of the most unique ways to date. Benoit Poelvoorde was a cruel, petty and misogynist God, living in a Brussels apartment high rise with his kept and silent wife (Yolando Moreau) and daughter (Pili Gryone). When not berating his immediate family, God spent his days torturing the human race in his surreal and supernatural office. He created numbered Murphy’s Laws, like the jellied toast always lands face-down for the sole purpose of annoying and harassing humanity as much as possible. Ea, the daughter of God and sister of Jesus Christ was fed up with his shenanigans and decided to do something about it.

After stealing the key to the off-limits office while God was sleeping, Ea entered the forbidden sanctity and proceeded to hack into his computer. She not only sent every human on earth their death dates, but she also syskeyed his precious computer so that he could do no more mischief. After consulting with her brother Jesus, a hilarious interaction with the plastic statue, Ea knew that she must escape from the apartment. The Son of God, Jesus, had failed, God was on a vicious rampage, so now it was time for the women to take over and try to fix things. She also planned to recruit more Apostles, so she picked 6 individuals at random from God’s massive filing system.

The bulk of the rest of the film was Ea’s interaction with, and recruitment of, her chosen Apostles. No longer dependent on God, these 6 individuals were free to search for the truth and to redefine their lives, often in dramatic and hilarious fashion. Not to spoil too much, but Martine (Catherine Deneuve) jettisons her tyrant husband for a loving gorilla.

Some of the most hilarious and satisfying moments of this film are when God returned to the Brussel’s streets, looking for his daughter. Apparently, away from his disabled computer, God lacked the superpowers and controls that he sadistically implemented in his office. His snarky and cruel attitude did not play well on the streets, and his comeuppance from the hands of fed-up humans was nothing short of delicious. Even an outraged priest gets in some licks on God. This sequence was just wonderful.

The Brand New Testament was dark, hilarious, and quite a satisfying religious satire. I picked up a rare copy off of eBay, but it is also available on Amazon Prime. Sure, the movie was ludicrous and outrageous, so much disbelief must be suspended to enjoy. However, this movie is no more outrageous and unbelievable than the pablum in the Old and New Testament of The Holy Bible. If you are not hopelessly religiously impaired, and want a roaring good time at the expense of God, you will love The Brand New Testament.

8.0/10.0 With The Goatesians Seal of Approval For Relentless Blasphemy