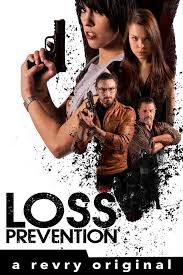 Here we have another low, low budget movie starring John Wells and Al Snow. However, I cannot go any further without mentioning another “Wells”. Vernon Wells. What? No, I’m not kidding you. Vernon Wells is in this movie as the evil CEO of R & P. The I don’t need the girl Vernon Wells in one of the greatest 80’s Action movies ever made, Commando. Any Ruthless fan who is now reading this review needs to stop reading and go immediately to iTunes or Amazon Video and purchase or rent the movie, Loss Prevention.

Like one of their (John Wells and Al Snow) other movies, Overtime, Loss Prevention spotlights ruthless and greedy Corporate America. Instead of a Pharmaceutical Company and Aliens, we have Corporate computer espionage and toothpaste. Like in Overtime, big business could be quite brutal, with no regard for the individual, either inside or outside of the company.

Here is some of the basic plot. We had two giant corporations, PNR and R & P, who were competitors. One engineer from PNR named Cooper (James Tackett) hacked into the mainframe and downloaded company secrets to a thumb drive; these secrets were to be sold to R & P for millions. Before Tackett could meet with R & P, corporate thugs at a local dive bar (The Soggy Weasel), he encountered a loss prevention agent from PNR, and got Mickey Finned by this agent named Brooke (Lauren Albert). Meanwhile, Cooper’s key chain and the thumb drive had been confiscated by a waitress who would not let him drive in his condition. The waitress handed off the drive to Nik (Abish Uhl) who was the daughter of the owner of the bar, Murphy, played by Al Snow. After this, all Hell broke loose.

The head henchman for the R & P Corporate thugs was Christian Boland, played by the great John Wells. This was not the John Wells that we all know and love from Piranha Sharks and Overtime. This character was a ruthless and sadistic Corporate killer. Instead of the ripped and beautiful John Wells, we had this creepy nerd with jeweled glasses, a man-bun, and a guy who ordered a Roy Rogers. This John Wells was a villain, a very unlikable character. He and his fellow henchmen stormed the bar, and bullets began to fly. He’s into “Downside Risk Management”, and it didn’t matter how many lives he had to take to achieve the Corporate goals.

Other than John Wells, there were some really good acting performances in this movie. Besides the tandem of John Wells and Al Snow, we had an outstanding effort by Abisha Uhl, who was Nik, Murphy’s daughter. There was not a lot of time for character development, but Nik and Murphy had a strained, but loving relationship. Nik was the real star of this show. She wanted to land a job in Corporate America, but she was a lesbian who dressed like a goth Charlie Chaplin, and had an attitude not unlike Halley in The Florida Project. She was also fearless and versatile, and had a gift of bullshit that would eventually make a difference in the outcome.

Loss Prevention was made on a budget of less than $20,000. No one is going to ever mistake the action scenes and gunfire for The Matrix, or the acting to be the equivalent of Daniel Day Lewis in There Will Be Blood. For this budget, it was incredible what was accomplished in this movie. Sure, the plot was ludicrous and the action unconvincing and cheesy at times, but so what? Loss Prevention was a rocking good time and adequately showed the versatility of John Wells in the uncharacteristic role of a villain.

Indie films like this one are a treasure and the effort put into this film was remarkable considering the budget. I highly recommend buying or renting this unique movie that again showcases the acting ability of John Wells and Al Snow.

7.5/10.0 with the Goatesians Seal Of Approval for outstanding Indie Movies.