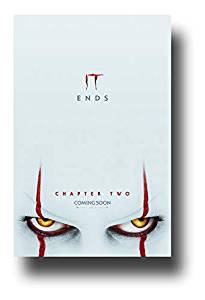 Fair Value of It Chapter Two: $.50. I wouldn’t turn it off if it was an airplane movie.

Is It Scary? Aw fuck no. I’ll put it this way: I was never scared by haunted houses because I know that people are going to try to scare me. On the other hand, deep woods and urban areas late at night scare me, because I don’t know what to expect. It Chapter 2 is too formulaic a hero’s journey to ever build suspense or worry. We know that Beverly (Jessica Chastain) and Ben (Jay Ryan) are too pretty to be in peril.

And the scares are just bad too. As Margot Robbie says in the horrible pre-intro ad pump for Suicide Squad 2, I’m tired of evil clowns. Bill Skarsgard is a cartoon, no more- all lolling tongues and rolling eyes. I kept watching this film asking myself “who is scared of any of this”? There are no practical effects, only bad CGI. Are You Afraid of the Dark and Goosebumps would be ashamed by the cheap mawkery on display here- an endless parade of things running around waving arms going “booga booga booga”.

It Chapter 2 is like a horror movie made by an alien with no real grasp of human psychology. It has the tropes and cliches of a horror film, but then it thinks that musical numbers and “Angel of Morning”are scary. No wonder It is so easy for the loser’s club to beat- for an evil that is empowered by fear, it never once manages to be frightening.

Who Will Like This Film? If you’re a child and you’ve never seen a horror movie, this might work. It’s ersatz horror, the Folger’s Crystals of terror, I suppose.

Also, director Andy Muschietti does succeed in evoking nostalgia for a time and setting that I’ve never known. The camaraderie and the social scenes of the grown-up Loser’s Club are great. If this movie was advertised as The Big Chill, but with supernatural elements, that’s a more honest billing. Struggling standup comic Richie (Bill Hader) and neurotic insurance analyst Eddie (James Ransome) especially shine. I wanted to spend more time with all of the cast and less time crawling down sewer tunnels.

Who Will Hate This Film? I am in the rare minority who consider It to be one of King’s lesser works. The novel has vivid and brilliant passages but the pacing just makes it into a slog. Fans of the book will not find the queasy trauma that makes the novel so memorable. There, the time shifting between the childhood and adult scenes make a compelling meditation on trauma and memory. The town of Derry and it’s evil core are never really conveyed. Opening scenes like a gay-bashing just fall as non-sequiturs, and the main cast never really feel like they’re coming back awkwardly to a home-town, they feel more like New Yorkers on tour.

Fail to the King: Another problem with It Part Two is a failure to capture any of the strength’s of Stephen King’s writing. There’s no deep psychological breakdown of a Sissie Spacek, or a Jack Nicholson. Psychotic bully Henry Bowers (Teach Grant) has no dimensions at all. There is almost no characterization in a film adaptation of a story that is all about characterization, and so the audience is left uncaring about the characters. Likewise, Tim Curry imbued a sardonic malevolence to Pennywise the clown. His performance was memorable and scary because there was personality. Bill Skarsgard’s Pennywise is all physical gimmicks and flop sweat. Even when the character is in control of a scene, it never feels as if Pennywise is in control- it just feels like he got a lucky turn as he presses all the buttons on his jukebox of hallucinatory horrors.

Charitably, I try to imagine that I’m at a rare extreme, someone who’s been so saturated by watching hundreds of horror movies that I’m jaded to lesser scariness. But It Part Two is a glitzy fun-house assembled without thought towards pacing, suspense, or humanity, and as such only serves as a waste of a talented cast and a few good FX houses. Oh well, no doubt we have It 3, It 4, etc., do await in the future. If there is one rule of horror, it is that true evil never dies so long as it remains profitable.